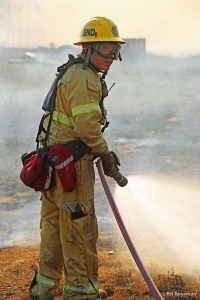 When the fire began shortly after 11 a.m. on Sunday, June 19th, the ranch was evacuated.  The ranch has an automatic feeding and watering system, but needs someone there to supervise it.

Two water cisterns on the property hold about 15,000 gallons each. “That should have fed our chickens for three or four days at least,” he says.

Then he learned from a TV cameraman that Cal Fire was using his ranch as a staging ground for fire crews.  He initially was told firefighters drained the tanks, but later called us back to state this was inaccurate.

His 100 acre property had bare ground clearance of 25 acres that “looked like  a Wal-mart parking lot,” he says, voicing frustration that he has not been allowed to hae accesss.

Unable to help, the employees left and have not yet been allowed back into the property.

Then a vineyard owner with a water truck offered to bring in a supply enough for an hour or two to help the chickens.

A second water truck operator told ECM that he asked Humane Society volunteers for permission to help, but was denied.

Meanwhile Cebe tried to get an emergency generator in and hooked up to get the well pump operating and a misting system to cool down the chickens, as well as the automatic feeding system.

At first, SDG&E balked at the idea, fearful that feedback could electrocute a lineman. But after Cebe explained steps to prevent that, he says, “SDG&E said okay but the fire guys wouldn’t let us.”  Eventually after more negotiations he agreed to surrender his electric meter and was finally allowed to hook up a generator and start pumping water.

“How many are lost now? We have no idea. ..the stage we’re at is trying to save the living,before collecting the dead.”

He says SDG&E called him last night to say they were ready to turn his power back on, but Cal Fire has denied permission, perhaps for fear of energized lines harming firefighters or perhaps to discourage residents from trying to return home while the fire is still burning to the east in the Lake Morena/Campo area.

He now has enough water for 24 to 48 hours. “I’ve got a truck on the road right now with 24 tons of feed,”Cebe says, frustrated at the lack of access.  “We don’t need help from the government – we need the government to get out of the way.”

His biggest concern is losing breeder chickens,  which could shut down operations for months.”

Cebe Farms specializing in sales of live, heritage chickens.  Before the 2003 Cedar Fire in Ramona, Cebe says he had a 90% share of that market here; after the 100% loss in the fire, his share dropped to 50%.  He's also had setbacks

“There’s the initial loss of birds, then how many survivors will make it to market. But the biggest loss is losing your customer,because if you lose your customers, ”he reflects, “you’ve lost the whole business.”

After reading about what happened during the 2003 and 2007 fires, I will ignore the evacuation orders and stay on MY property. Too many people were kept from returning to their homes for too long after imminent danger was over.
Not allowing residents to return is what causes people not to evacuate. The same thing happened to us in Jamul in 2007. Road closures kept us out almost 4 days after the fire went through. But access was given to the Humane Society, the Press, etc. I will never evacuate again.
For the citizens of Potrero, Campo and Lake Morena, and our animals, this has been one of the worst handled situation ever! We have animals abandoned (owners in town and unable to return) and dying. People desperate to get in are refused entry. One woman needed to get in to her seven month old baby and was rudely turned away in Campo by the CHP. NO ONE from the various agencies oh-so-proud to tell you how great they are, brought us supplies and regular citizens have scrambled to get feed for animals, extra water and supplies and have been turned away at the checkpoints. Even when people came down to accept items over the roadblock some were refused the ability. And now Mr. Cebe has lost animals due to bureaucracy. During the Harris Fire truckloads of supplies were allowed in for humans and animals but this time no one showed up. After the 2007 fires - what? There were tons of meetings to make sure that next fire they were more coordinated but they have not only dropped the ball but murdered valued animal family members and now Mr. Cebe's business stock. This is egregious and someone needs to answer for it.

Do you know the name of the mother or where she lived exactly?  Was someone else with the baby and do you know if they were able to evacuate?

Glad to learn that.

Best wishes for Joe and his family.
What recourse does he have? You can't sue The State. "We know what's best for you" usually isn't.
Does the TV camera operator have video and will the local news put it on at 5 and 11?