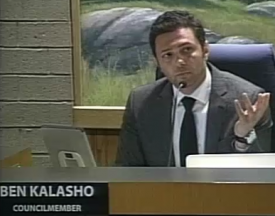 March 9, 2018 (El Cajon) -- As though the water couldn’t get any hotter for embattled El Cajon Councilman Ben Kalasho, he is now facing accusations that he is illegally shielding his personal assets, prior to an anticipated August trial on allegations that he sexually harassed two beauty pageant participants in 2016, among other claims.

The plaintiffs’ attorney, Jimmie Davis Parker, asserts that Kalasho made false real estate filings in order to hide assets that could potentially be sought to satisfy a legal judgment, should Kalasho lose the case. (View documents.)

Filing false real estate documents is a felony crime in California, though it is not yet determined whether the allegation is true.

This isn’t the first time Kalasho has been accused of improprieties.

Kalasho has previously been found by a jury to have committed fraud in an earlier case involving his car wash business. He was also ordered by the state to cease representing a Chamber of Commerce that he founded as a nonprofit; he has since changed the for-profit organization’s name. The Chamber runs the beauty pageant, which plaintiffs represented by Parker contend was fraudulent.

In the same lawsuit filed by pageant contestants, owners of an El Cajon taco shop allege they were intimidated, threatened and defamed in social media posts proclaiming them “the worst Mexican food in El Cajon” by Kalasho when they wouldn’t support his candidacy for El Cajon City Council, which he won in Nov. 2016.  In addition, local attorney Lina Charry alleges that Kalasho posted a bogus online poll naming her the “worst lawyer in San Diego” after she prevailed in an earlier case against him.

Kalasho has denied the sexual misconduct charges and other claims in the initial suit. He countersued plaintiffs, but his countersuit was dismissed by the Superior Court.

As reported by Jeff McDonald of the San Diego Union-Tribune (UT), Kalasho filed a pair of documents with the San Diego County Recorder late last year.

One of the filings questioned by plaintiffs’ attorney Parker is a document in which Kalasho has recorded a $500,000 loan taken out against his El Cajon residence.

The record, legally known as a “Deed Of Trust” and “Assignment Of Rents,” lists the lender of the loan as “Israel Moses Sieff LLC (Nevis).” The UT’s investigation of numerous websites cites “Moses Sieff” as a male who was born in Manchester, England in 1889 and died in 1972. Sieff become a wealthy British industrialist and Zionist before he died. Sieff’s name is also associated with a number of websites discussing the “Illuminati” and the “New World Order.” A search of the California Secretary of State finds that their no such firm registered in the State of California, neither the UT’s search of two national databases of incorporated entities did not result in any hits.

Another document is a property trust recorded by Kalasho lists a single bungalow-style family home by him in Santee located at 9422 Pryor Drive. The trustee for the home is listed as “Maxmillian Von Ayres,” a person not found in public databases or files of the San Diego County Court.

James Finigan, an attorney who has filed a Writ of Mandate against the City of El Cajon on behalf an anonymous group of individuals objecting to the City of El Cajon’s recent crackdown on marijuana dispensaries and cultivators, is now representing Kalasho in the lawsuit filed by the beauty queens, taco shop owners and attorney Lina Charry.

Finigan says in an e-mail sent to the UT, “My office is still in the process of analyzing the legal and ethical issues raised by the several different claims asserted by each of the four plaintiffs. I will let you know when I may be able to comment more specifically.”

Parker, who declined to comment directly on the transaction findings to ECM due to court rules, deferred to a letter submitted to Finigan in late January. He says,

“Please be advised that such a conveyance, if it is authentic, is a violation of the Uniform Fraudulent Transfer Act and steps should be immediately taken to mitigate the harm cause by the fraudulent transfer including, but not limited to notifying the secured lends of the pending litigation, as well as, securing the $500,000 proceeds in trust.

“If the filing does not accurately memorialize a conveyance, please immediately advise.

The Uniform Fraudulent Transfer Act (UFTA) cited by Parker prohibits debtors from transferring or placing property beyond the reach of their creditors when that property should be available for the satisfaction of the creditors' legitimate claims. A transfer under the UFTA is defined as “every mode, direct or indirect, absolute or conditional, voluntary or involuntary, of disposing of or parting with an asset …, and includes payment of money, release, lease, and creation of a lien or other encumbrance.”

A court brief filed by Parker on January 24th, 2018 specifically mentions the recording in San Diego County of the “Deed of Trust” and “Assignment of Rents.” It also accuses Kalasho of fabricating the name of “Maxmillian Von Ayers” and the payment of $500,000 from Israel Moses Sieff, LLC (Nevis) and/or Stewart Title Company to Kalasho as a falsehood under California Penal Code 115.

Published sentencing guidelines indicate if an individual is convicted under PC 115, the individual could serve  up to 36 months in state prison. In the least, a convicted individual may end up with probation which may include up to one year in the county jail along with other terms of probation. There is also a fine of up to $10,000 and an additional fine of up to $75,000 if the alleged false document affects title to or places an encumbrance or mortgage on a single-family residence.

Each act of filing a false document or of offering a false or forged instrument to be filed, registered, or recorded is considered to be a separately punishable offense.

Michael Cimdrich, a San Diego criminal defense lawyer who previously worked for the San Diego County District Attorney's fofcie, told ECM that it appears that there is potential for criminal liability if the allegations are true.

"This seems like an interesting case. Whether this will stick is entirely dependent on the evidence that supports these allegations," Cimdrich said. "Right now it appears that there is quite a bit of circumstantial evidence, which may be enough. However as a criminal defense attorney, I generally would need to see more than this to be convinced that the fraud allegation is credible."

According to an inside source at the City of El Cajon who asked to be not named, if Kalasho were to be found guilty of California Penal Code 115, his immediate dismissal from the El Cajon City Council would be mandated and a special election would have to be called to fill the remain portion of his elected term, which ends in December 2020.

The last time the El Cajon City Council had to deal with the prospects of losing a councilmember due to impropriety occurred in 2012 when Councilwoman Jillian Hanson-Cox, resigned after admitting she stole $3.5 million from a Kearny Mesa-based business where she worked. She was sentenced in federal court to 30 months in prison for that crime.

At that time, Councilman Gary Kendrick, who put a resolution condemning Cox on the public agenda, called Hanson-Cox’s actions “the greatest scandal we’ve ever had regarding an El Cajon City Council member.” In an interview with the San Diego Union-Tribune.

Barbara Medina, spokesperson for the San Diego County District Attorney Office could not directly confirm or deny whether the agency might be investigating the accusations lodged by Jimmie Davis Parker against Kalasho.

“The District Attorney’s Office gets information on allegations of a crime by the investigating agency that first received the report of a crime, usually a police agency,” she said. “However, sometimes we also receive complaints from citizens by email, mail or walk-ins. The time frames of the investigation process varies based on the information found and seriousness of the violation.”

ECM contacted Kalasho to ask for his responses to the following questions before publishing this article:

1. Please respond to the comments made by attorney Parker in the Union-Tribune article alleging that you falsified real estate filing to potentially hide assets.

2.  Who is Israel Moses Sieff LLC (Nevis), Moses Sieff, and Maxmillian Ayres. Could you please give me contact information for Mr. Sieff and Mr. Ayres?

3. Are you aware of the statute that makes filing false offense? This is in reference to California Penal Code 115 and the Uniform Fraudulent Transfer Act.

Below is Kalasho’s response in its entirety: 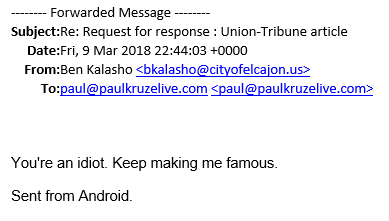 I am generally not a big fan of any politician but Ben really rubs me the wrong way. Please do not associate this man with the Chaldeans here in El Cajon (or Detroit). We Chaldeans, on average, are nothing like him and many of us scratched our heads at his pretentious events where he basically gave himself awards as if he was not one of the organizers himself. This man has a history of bad behavior. I remember him getting sued by his own friends not to long ago. It was a major talking point in our community that it was even happening because we are so tight knit. We generally dont sue each other over small matters (nor financial matters honestly) and work things out between families. He is a fraudster and a mean spirited double talker according to folks in our community except maybe liquor store owners who banked on him to deregulate their businesses... Most Chaldeans in El Cajon, especially the young 1st generation and 2nd generation kids, have been lucky enough to go to good schools in the area and are now working productive jobs (not liquor stores). Many of us went to college, and are living the American dream as engineers, doctors, scientists and skilled professionals fixing electronics, cars and homes. Our parents worked hard to get us to this point and its frustrating to see 2nd gen folks like Ben sell their soul for a minute of attention or a buck. Perhaps he should go back to Iraq for a few years to understand just how lucky we are here. Might do him some good.
https://i.imgur.com/M806dR2.jpg
Your the most unintelligent public figure I've seen in a while. You assume everyone is blind to your six grade tactics But we passed the sixth grade. Your an embarrassment to the city and the citizens of El Cajon if you don't step down I'll have to hope your felony conviction will take you out!!
Thank you Paul for continuing to report on Clown Kalasho, El Cajon's biggest mistake. https://i.imgur.com/oQyLGoG.jpg
Kalsho would be perfect as Trumps lackey. I feel as if we're living a nightmarish remake of Alice In Wonderland, where nothing is as it appears to be - when it come to so many politicians and their feeble attempts at illusion.
Is it true that the local police are polishing a special set of handcuffs for Mr. Kalasho?. I expect to see Kalasho led from the City Council Chambers to the County Jail by Halloween. Do you look good in Stripes, Ben?.