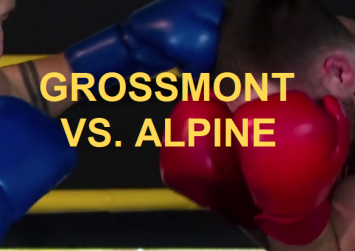 The appeal was filed last spring after a trial judge ruled that the GUHSD was under no obligation to build a high school as it had promised to the Alpine School District (AUSD) because an enrollment trigger of 23,245 students in the Grossmont district had technically not been reached “at the time of release of request for construction bids,” according to Grossmont’s argument.

At a hearing where cameras and audio recording devices were not allowed, attorneys for the AUSD and a local taxpayers group, Alpine Taxpaters for Bond Accountability (ATBA), argued that Judge Joel Pressman had erred in his decision. (See official recording obtained from the court above.)

Attorney Jon R. Williams from the law firm Williams Lagmin LLP, representing AUSD, said that the meaning and intention of Proposition U, a ballot measure which was supposed to fund the measure, had never been tried in court. They said that the GUHSD had effectively started construction by purchasing six parcels of real property, leveling and demolishing homes where the high school was to be built on former ranch lands.

“We’re talking here about heavy machinery out there at the site actually knocking down homes, moving earth, doing work which is typically referred to as ‘construction,’ hiring contractors to do that kind of work,” Williams said. “And notably at that time, they received bids to do that work -- that demolition work, that scraping of the land. The enrollment trigger had been satisfied -- that was in 2010.” Williams continued. He added that there was work at the site far beyond just site development.

Supporters at Alpine have argued that the enrollment threshold was met in 2008-09 and 2009-10, according to GUHSD school board documents before the land was acquired. But the court later said that it interpreted the bond language about the threshold to mean enrollment at the “time of construction” of the building of the high school.  At the time of construction, enrollment at comprehensive high schools and charter schools in the district was 22,712, less than the 23,245 trigger, according to the district.

Khai LeQuang, of the law firm Orrick, Herrington & Suncliffe LLP represented the GUHSD and its superintendent, Ralph Swenson who was also named in the legal action. LeQuang opened his remarks to the justices, stating that the fundamental flaw in the plaintiff’s case was that the court’s ruling on their primary argument regarding Proposition U precluded a trial on the remaining aspects of the Proposition.

“Those other parts are just because the court found that there is a general promise to all taxpayers to all people who voted for Proposition U to try to complete all of the projects with the available funds-- that this means that Grossmont was to devote immediate bond dollars to building a school at the time that enrollment is down at well below the threshold, but at the point Alpine brought the lawsuit, that the enrollment was still well below the enrollment threshold,” LeQuang said. “Nothing that this court had decided previously addressed this evidence.”

In spite of the contention on the part of Alpine, the Justices, Behnke, Richard D. Huffman, and Gilbert Nares on Thursday ruled that Pressman was correct in his assertion that the language from two voter-approved propositions, U and H, did not mean that the Grossmont District was obligated to build a four-year high school for the Alpine area.

When voters approved the measures totaling some $700 million, Alpine residents aimed to get a high school built for the area that would not put the burden of local residents to continue transporting their students to Granite Hills High School in El Cajon and Steele Canyon High School in Jamul once a trigger of 23,245 students was attained in the Grossmont district. In their arguments, attorneys for both Alpine and ATBA alleged that GUHSD attained that threshold number of students. The long commute on sometimes-icy roads has resulted in fatality accidents that have killed Alpine students in the past.

The fly in the ointment was that between 2009 and 2012, GUHSD experienced a decline in student enrollment and less per-pupil funding. That caused the District to make substantial cuts to its budget by eliminating teacher positions, laying off administrators, and reducing programs and salaries. In November 2012, the GUHSD Board postponed further work on the new high school and reduced the rank of building the high school in a prioritization of projects.

On grilling Grossmont’s attorney, Judge Behnke revealed that they could not pinpoint in what account the money had been set aside for an Alpine high school, though bond monies have been spent refurbishing and building a new performing arts center at Helix High School and other building improvements.

Judge Behnke asked, “Let me ask a question which I asked opposing counsel. Knowing all of this and acknowledging that some things may have been altered and some things not, where is the money sequestered for this school or has it been spent?”

LeQuang replied, “That’s a great question. The question here is if Grossmont had decided not to build the school.”

Judge Behnke then pressed, “Speaking for myself, it looms over this. The public clearly voted for one thing,” then suggested Grossmont was “not forthcoming for a number of reasons. So now the question arises: Okay, the money was there for the school -- where is it? Did it disappear into the general funds budget?”

LeQuang then said, “No. What it means there has never been to my knowledge of any evidence of the record $65 millions available in bond funds at any particular time.”

Behnke then followed up her query by asking, What is available? What was sequestered or collected or earmarked for the funds to build the school. Where is it?”

LeQuang answered, “From the inception of the bond program there is a budget. But the budget contemplates there is a timing for when the district will be able to raise money based on the amount of bonded indebtedness it can incur in a given year and that is the function of the assessed value of the property. As a result of the recession the property values went down.” “

So there is no money anywhere?” Behnke said.

“It’s not available. It’s just the timing of the availability of the funds has been extended,” LeQuang explained. He continued to say that some of the bonds had not been sold.

In an earlier appeal, the court did affirm Alpine’s motion for a preliminary injunction requiring that proceeds from Proposition U be set aside. But that was later overturned.

Grossmont’s actions also drew a rebuke from the County Grand Jury, which published a reported titled, “Grossmont Union High School District – Fool Us Once, Fool Us Twice?” The report sided with Alpine residents and admonished the GUHSD to either establish a firm timetable to build the high school by the end of 2013, or cooperate with the AUSD’s efforts to build the school and turnover bond funds.  The GUHSD instead defied the Grand Jury and did neither, as ECM reported.

So what’s the next step for the Alpine Union School District and their quest for a new high school? ECM reached out to both Williams and Sherman for a comment but did not receive a response. It is unclear whether plaintiffs supporting an Alpine High School will file an appeal to the state Supreme Court or not.

George Barnett, treasurer of the Alpine Education Association and a long-time advocate for the Alpine High School, posted this reaction to the decision in the Ranter’s Roost, an online land use issues discussion forum in East County.  “The Chief Justice of our tribunal after telling Grossmont that their tactics towards Alpine was `Bait & Switch’ and after asking Grossmont `Where was the money?’ wrote an opinion reaffirming Pressman's trial court finding.  Read into the Appeal ruling all you may want on the technicalities, at the end of the day the Appeals Court was unwilling to enforce the Prop 39 mandate that agencies build what taxpayers approve. Ultimately they ruled that Grossmont has the discretion to spend as they are.”

Meanwhile, the Alpine Union School District faced yet another setback on Friday when the California State Board of Education nixed Alpine’s bid to add a high school to their community by denying a petition that sought to unify the AUSD so that it could build the long-sought high school.

If approved, the petition would have allowed Alpine to split off from the GUHSD and enabled the AUSD to expand beyond elementary and middle school to also become a high school district.

The San Diego County Board of School District Reorganization had recommended that the state approve Alpine’s unification petition. But the State Department of Education ruled that it be denied.

The primary reason behind the state Board of Education’s decision was due to the school district’s declining student enrollment and a lack of sufficient funds that would be needed to run the high school, the San Diego Union-Tribune reported.

Dozens of Alpine residents made the trip to Sacramento to testify about their 20-year struggle to get a high school in their community. AUSD Superintendent Rich Newman urged the board to consider the option of allowing the district to expand Joan McQueen Middle School to slowly build a high school, starting with ninth grade students. A similar approach in Bonsall began with  65 students and now has 330 students through 12th grade.

But GUHSD school board trustee Robert Shield argued that Alpine’s declining population of young people and financial challenges “simply do not support” a new school.” Arguments were also made that the Alpine district could not afford to provide many of the extra-curricular activiites, such as sports and music, that Grossmont schools offer.

The action, which has cost both districts' taxpayers millions of dollars, leaves Alpine with few options, barring a changeover in the majority at the GUHSD board in future elections -- a tough climb, since the district recently moved to district insteaad of at-large elections, meaning Alpine residents can vote only for one member.

The state board of education told the AUSD that other options were available for Alpine to obtain a high school. Can anyone tell me what those options are ?
The kids in Alpine deserved more. And no, I won't be voting for a bond again either!
It will be important for us at each and every election to remind voters of the judges decision: Voting for a bond does not mean it will be used for that purpose. I doubt i will ever vote yes on ANY BOND FOR ANY PURPOSE ever again!