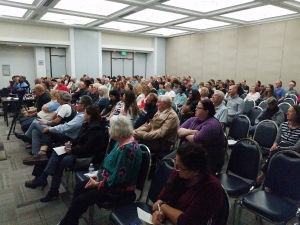 November 29, 2017 (El Cajon) - With the election scheduled next year, some 200 East County Democratic Party faithful gathered at the Ronald Reagan Community Center in downtown El Cajon for a 50th Congressional District candidate forum moderated by KPBS public radio and television journalist Mark Sauer in early November, sponsored by the progressive group, Indivisible. The candidates appearing at the forum were Patrick Malloy, Ammar Campa-Najjar and Pierre (Pete) Beauregard. Candidate Josh Butner did not appear at the forum due to a scheduling conflict. Gloria Chadwick and Glenn Jensen, who had launched a campaign for the House seat in March, have since suspended their campaigns. 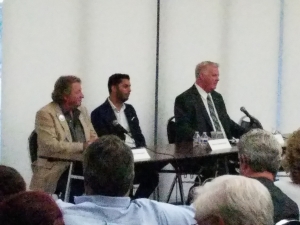 The audience at the forum was not allowed to ask direct questions of the candidates; instead, the questions were submitted in advance through e-mail. The order and content of the questions submitted were determined by Sauer. The audience was encouraged to “keep an open mind,” admonished not to applaud and not to engage in cheering or jeering.

All three candidates, at one time or another during the forum, took opportunities to criticize the rocky tenure of incumbent Republican Congressman Duncan Hunter. (Hunter has been bruised over allegations that he illegally utilized money collected through his campaign for personal expenses. The Los Angeles Times has recently reported that with an FBI investigation over the alleged misuse of funds, Rep. Hunter has spent $336,664 on lawyers at seven firms in San Diego, and Washington DC. Hunter says that he repaid the money used by him back to his campaign.) 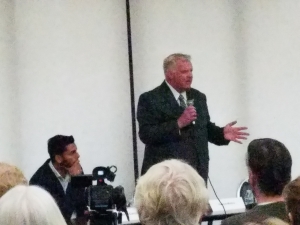 Because of the prolonged official federal investigation, some political analysts say that Hunter will not be able to pull off as decisive of a victory he had in 2016 when he was elected with some 64% of the vote vs. his opponent, Patrick Malloy who garnered 36.5% of the vote in 2016, or if he can win at all. This all could change if Hunter is indicted or forced to resign. 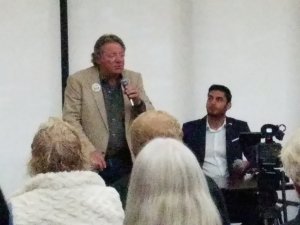 In opening statements, all three said that they must thoughtfully reach out to Republican voters in the district to be successful in this traditionally Republican-leaning district, although Democrats have been eroding that lead in recent years.

Beauregard began by saying that when America was living under President Franklin Delano Roosevelt, FDR’s “New Deal” and a “second bill of rights” produced a very strong middle class in the United States. “He was talking about basic human rights, healthcare, education, a good job, a clean planet. These are our rights. I have what I call a living platform. In that living platform are what I call the three Ps: ‘passion for communities,’ ‘protect our democracy,’ and ‘peace – domestically and internationally,” he said. “In protecting our democracy, we need to go full out and take out Citizens United,” Beauregard continued. Beauregard related to the audience that his experience from his time in the U.S. Navy and as a peace activist will come in handy for him to pursue his agenda if elected.

Born in San Diego's East County, Ammar Campa-Najjar was raised by “a working class single mother who, being broke and brokenhearted, raised two boys to men by herself,” he said. Najjar, after graduating from San Diego State University, took a position with the Barack Obama presidential campaign as a Field Director. From there he served as an intern in the White House and later as an official at the U.S. Department of Labor, leading the Office of Public Affairs for the Employment and Training Administration. Like Malloy, Najjar is setting his sights on overturning the Citizens United Supreme Court decision. Najjar says that he has only accepted private contributions to his campaign. “We intend to lead with our values and we intend to have Medicare for all. I will use my experience from the Department of Labor and make good apprenticeship jobs,” he said. “We are going to fight against climate change and for the Dream Act. We are going to pave to path to a unified, fortified, progressive future for all in our district.” He said that he does talk to Republicans who say they would never vote for him, but added, “What I say back to them is that ‘I’m going to be voting for you.’ So, you better start talking and telling me what keeps you up at night,” he continued. “And you know what happens...they start to say that they are going to vote for me. That’s how we are going to win this race.”

(The reference to “Citizens United” is a landmark case on  U.S. constitutional law, campaign finance, and corporate law dealing with regulation of political campaign spending by organizations. The 2010 Supreme Court judgement  tossed out the corporate and union ban on making independent expenditures and financing election advertising. It gave corporations and unions the green light to spend unlimited sums of money on ads and other political tools directed in calling for the election or defeat of individual candidates. Some have argued that the Supreme Court’s decision has corrupted democracy in the United States by allowing special interests to hijack the election process.)

Patrick Malloy in his opening statement was quick to remind the audience that, “I live and work in this district as a small business owner and as a real estate agent. I know what it is like to bring two opposing sides and bring them together.” He emphasized a bi-partisan paradigm of an approach to working with the Republicans in Congress and working out agreements that works “for both sides and get it done on time. That is a skill set that Congress lacks completely.”  Malloy promised that he would spend a minimum of 200 days in the district and stage six town hall meetings. “We need a champion of the middle class. I plan on focusing my attention on the middle class and those who aspire to get into it.” He advocated major spending on infrastructure and employing veterans to get it accomplished “rather than blowing overseas in Afghanistan.” Malloy also stated that he supports a single-payer healthcare system.

Listen to an audio file with portions of the forum: http://www.mediafire.com/file/nacowo67t251b3o/DemocraticDebate11052017.mp3

(The audio file is of the first half of the forum and the last fifteen minutes of the second part due to technical difficulties. Since the forum was videotaped by the organizers of the forum, ECM requested the video to include with this article on numerous occasions, but did not receive a reply from the forum organizers.)