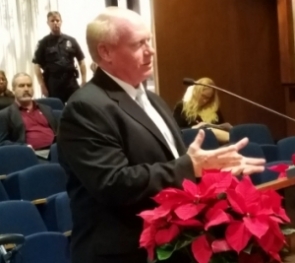 Earlier this year, the City Council gave City of El Cajon City Manager Doug Williford permission to engage in talks with hopes it would lead to a draft agreement with the worldwide concert promoter. But Tuesday’s action marked the first conclusive step that the citizens of El Cajon will have an operational performing arts center by the first half of 2019.

According to Williford, a major consideration was to make sure that the theater’s peppered history would not repeated, so that the theatre won’t close again. “First and foremost, we had to find the right partner that could make or break the future success of ECPAC. We are happy to say that we not only found just the right partner, we believe we have found what is the best partner in the nation for our city, believe it or not,” Willford announced. “They are not only the premier live entertainment producer in the world, not just in this country, but they are the finest.”

He provided Council with a birds-eye view of the draft agreement. “It has taken a bit of time to get to this point, but here we are,” he stated. “On behalf of our staff and I’m sure Live Nation, we are very proud to present this final draft management agreement between the City of El Cajon and Live Nation Worldwide, Inc.”

Live Nation is the U.S.’s and world’s largest live entertainment producer with some 200 venues in seven countries, focused primarily in the United States and Europe. In Southern California, the company operates or books numerous venues, including the Mattress Firm Amphitheater in Chula Vista, the House of Blues in San Diego, and three venues owned by the City of Riverside, two of which are similar to ECPAC, as well as several venues in greater Los Angeles. It also owns Ticketmaster, a performance ticket seller known around the world which it acquired in 2010 with a merger of its own ticket selling outlet.

Before relating the major points of the draft final agreement to the City Council, Williford outlined the process of how the City and Live Nation arrived at the agreement. He noted how the City Council some five years ago arrived to the conclusion that the nearly 40-year-old 1,140 seat theater should be preserved, after briefly considering a proposal to raze it and replace it with a business-class hotel. 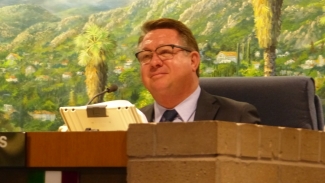 The proposal to raze the theatre occurred during the tenure of the former mayor. By contrast, current Mayor Bill Wells (photo, right), who plays several musical instruments himself, has been supportive of the arts and efforts to reopen the performing arts center.  Councilman Kendrick, whose son grew up active in community theatre and is now a Hollywood script writer, has also been a driving force to save the theatre.

Since the decision to spare the theatre, the Council was able to come up with an alternative approach which would not only allow the City to have a new hotel on another site, but also work towards a plan that would allow the theater to be refurbished using funds from sale of the City’s former police facilities on Fletcher Parkway, which has been replaced with a new police headquarters downtown.

Williford noted that Council directed five years ago that “ECPAC would be preserved and we would find a different place for a hotel – which we obviously have – with the Marriott Hotel that is about to open, and to seek partners and other methodologies in order to successfully long-term reopen the East County Center for the Performing Arts for this community.” he said.

Live Nation would not lease the building, but would manage the performing arts center on behalf of the City of El Cajon, a point that Williford has always stressed in his presentations. Live Nation and their employees would contract to the City, which would be involved in the daily operation and management of the theater. Initially the management agreement would be for a term of five years, with two additional five-year term options, making the agreement potentially effective for fifteen years. The contract would be extended subject to the mutual satisfaction of Live Nation and the City of El Cajon.

Live Nation would begin operating and managing the theater approximately six months prior to the actual opening of ECPAC what is anticipated to be in early 2019. In exchange for Live Nation’s services, the City would pay a management fee of $375,000 per year through the ageement’s initial five-year term. In addition to the management fee, the City of El Cajon would pay $50,000 for consulting services during the refurbishing and renovation of the facility.

In exchange, all income generated from ECPAC – including ticket sales, rental revenue, and concessions) would go to the City. If Live Nation is able to increase revenues per the expectations it has spelled out, Live Nation would receive an incentive bonus in which the additional revenue would be shared between both Live Nation and the City of El Cajon. Willford said that this provision of the agreement would create a strong financial incentive for Live Nation to outperform the stated expectations.

The City expects that while some subsidy of the theater will always be needed, the amount of that subsidy should drop dramatically, as occurred after some other cities have partnered with Live Nation.

Williford foresees construction and renovations could begin as early as late spring to early summer 2018, with construction expected to take seven-to-nine months, with an anticipated grand opening in Spring 2019.  “We will do everything we can with our due diligence to expedite this every way we can,” he pledged. “To put it simply, it is the number one construction priority for the city in 2018….and nothing is going to get in the way.”

The Agenda Report distributed to members of the City Council concedes that in the past, the theater has been utilized by many groups as a local community event center hosting local artists and organizations. Because the cost of improving the facility lies solely with the City, the report says it is likely that not all of the local organizations who once utilized ECPAC in the past will be able to afford to do so in the future. However, the report continues, “The agreement does provide provision to assist non-profit and school events to a limited extent and the City Council may choose at a later date to further subsidize such events.” The details of how local groups will be facilitated or selected are not discussed.

Live Nation’s Executive Vice President of Clubs & Theaters North America, Arich Berghammer, also spoke before the Council cast its historic vote.  He said that in the course of his tenure with Live Nation,t he has had the “luxury of seeing many cities in the United States.” “You have people who care, and that’s a really important thing to have.” He emphasized, “This is your facility. My role is to facilitate your needs. The last thing you need is the world’s biggest concert promoter in telling you what you need. It’s completely the opposite. One of the things which I do believe that we can do for you is as a partner is that you have a community with needs which are bigger than ours. As your operating partner in this, we have lots of dialogue. That’s a very important thing. Our management team will live in your community. It is imperative that we see you over breakfast or lunch, and bring in content that fits,” he stated. 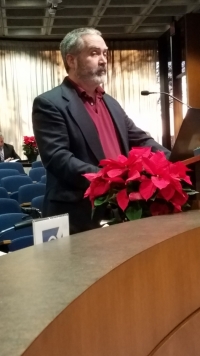 Ray Lutz (photo, left), a community activist who helped lead a “Save ECPAC” effort when demolition of the theatre was proposed,  expressed a tempered enthusiasm about the deal. “This is going to provide a real reason to come to El Cajon and cure a lot of the reputation problems that we’ve heard about,” he said. “This is the first time the city have taken responsibility seriously to run this civic asset. You guys have not been taking your responsibility. It’s had a fence around it for ten years.”

He expressed his concern about some aspects of the agreement which states that the City of El Cajon will be given twelve performance dates to give out as it chooses. “I’m worried what kind of groups you’ll bring in there. Is it going to be open for public comment? ” Lutz also complained that the draft final agreement developed between Williford and Live Nation did not include any public participation.

One regret Lutz voiced was that due to the theatre’s long closure, the Grossmont Community  Concert Association, which he led, was forced to shut down without another viable venue. But he acknowledged that it’s now possible the group, which regularly sold out its events at ECPAC, could be revived.

Lutz concluded, “Thank you very much. You’re going in the right direction.”

Council is expected to ratify the final details of the agreement hammered out by the city manager and Live Nation in the coming weeks.