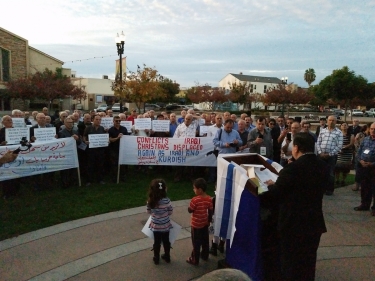 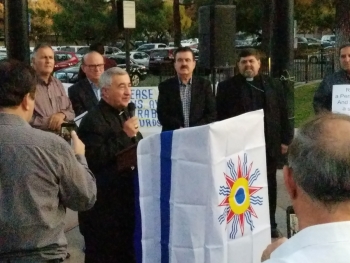 “Look at the suffering of those people. They have no one to defend them,” said Bishop Emanuail Shaleeta of the St. Peter Chaldean Catholic Church in El Cajon. “We are here to support them. We are here to back them. We are here to pray for them. And we are here to talk on their behalf. That’s why we are asking the government of Iraq – the politicians of Iraq and the U.S. government which is present there and in the Kurdistan area. We would ask them to please do not forget about those people. Do not forget their suffering,” he said to the crowd of concerned Iraqi immigrants.

Bishop Shaleeta said that the present Iraqi government has done little to address this fermenting issue facing the citizens of Iraq. “The Iraqi government and Kurdistan area is making the simple and poor people victim[s] of their politics,” he said.

Besma Coda, an Iraqi born in the oil-rich area of Basra and educated at Baghdad University, is the co-founder and Chief Operations Officer of Chaldean Middle Eastern Social Services, one of the first non-profit social services for Chaldeans and Arab communities in the United States. The social service agency serves recently arrived Chaldeans in El Cajon. 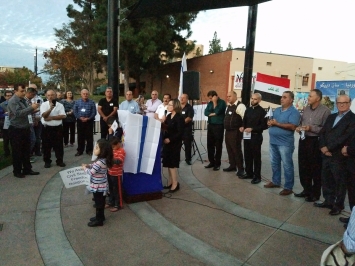 d the plight of the Chaldeans in Iraq. She said that Iraqi Christians are been treated poorly and are being brutalized by Iraqi Muslims and Kurds, who aim to take advantage of their plight.

“The Chaldeans are being kidnapped; women and children are terrified to walk the streets at night or even during the day. They are without water, electricity, gas, education and other environmental basic needs,” she said. “When people want to take action into their hands and try to hold their towns [from the armies], they are stalked. Hard punishments are taken against them. Iraqi Christians and other minorities need to be become part of the solution to help rebuild their country,” she told the crowd.

According to organizers of the rally, Iraq is considered by some to be the birthplace of Christianity with the Chaldean, Assyrian, and Syriac communities that are the original architects of Mespotamia, what is thought to be the cradle of modern civilization.  In 2017, estimates indicate that due to decades of war, the Christian population of Iraq is now about 200,000 people, down from 1.5 million in 2003. While Arabic and Kurdish are the official languages of Iraq, Turkmen (a Turkish dialect), Syriac (Neo-Aramaic), and Armenian are official in areas where native speakers of these languages constitute a majority of the population, according the Central Intelligence Agency World Factbook. Today, 99 percent of the country is Muslim, followed by Christian,Yazidi and other communities that together amount to less than one percent.

Many Christian families have fled to northern Iraq, Recent reports, the protestors say, indicate that the overall Christian population may have 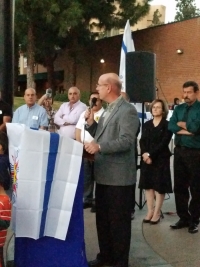 dropped by as much as 50 percent since the fall of the Saddam Hussein regime in 2003, with many fleeing to the Middle East Syria, Jordan, Lebanon, and the United States.

Among the other speakers at the rally, El Cajon City Council member Steve Goble shared his sentiments about the current situation in Iraq, but also credited El Cajon’s large Chaldean community for bringing renewed vibrancy to the city.

“The Chaldean community has added a lot of value to the El Cajon community. Their arrival have kicked out a lot of the bad elements in El Cajon and chased them away. It is important to support people who contribute to your community. And one of the things that is important to them is peace in their homeland,” Goble said.

`Ahmed’, a local El Cajon businessman, who didn’t want his name revealed (like many others at the rally) said to ECM, “We are here today because many of our people are in pain because of the pressure being put on them on the Iraq and Kurdistan government and we don’t need them to be in the middle of this war. We are trying to give voices to people who have no voice.”

While many of the rally participants in their hearts yearn to return to their country and are concerned about current conditions, albeit sympathetic to the situati 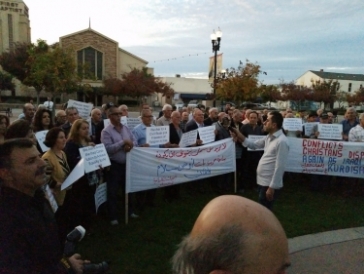 on, Ahmed is decidedly concentrating on providing a good life for his family in El Cajon since they arrived here in 2003.