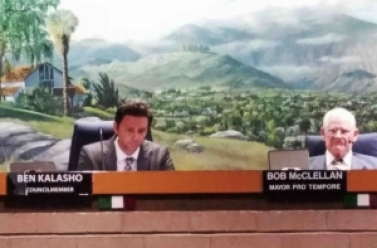 June 15, 2017 (El Cajon) -- Aiding El Cajon’s homeless population, disruption of a neighborhood by occupants of a house allegedly inhabited by drug users, and licensing of a new adult daycare center near El Cajon’s city center were the main topics discussed by the El Cajon City Council at its bi-monthly hearings on June 13th.  In addition, a budget workshop was held earlier  to consider El Cajon’s fiscal 2017-2018 preliminary annual budget.  Councilmember’s Ben Kalasho’s concept to draw down El Cajon’s sales tax to 7.75% drew strong broad opposition, with critics arguing it would devastate law enforcement and fire protection in the city.

Two individuals during public open comment sessions at the 3 p.m. and 7 p.m. meetings expressed their concerns over Kalasho’s sometimes strident actions during Council meetings and comments on social media, including ageist comments about fellow Councilmember Bob McClellan. In a Facebook post on May 24th, following a contentious session on redistricting, Kalasho wrote, in part, “…Who is voting for these guys? No, serious question, who? I literally sit next to an 84 year old man on the dais.” (A “dais” is the desk occupied by council members.) 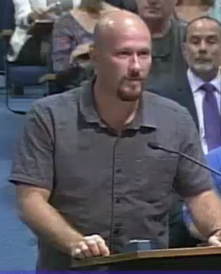 To a stone-faced Kalasho, El Cajon resident Nathan Cornett (right) expressed disdain for Kalasho’s comment. “On the front of the agenda, it says, `honoring and celebrating the people who make El Cajon the valley of opportunity,’” Cornett noted. “My generation doesn’t know a whole lot about honoring. It is a problem among my generation. Something that has deeply disturbed me in our political sphere is that when somebody is upset or doesn’t agree with the direction things are going, the typical method is to berate that person until they are afraid of confronting you. Or you are become afraid of being made fun of,” he added.  “I witnessed a comment that Mr. Kalasho had said toward Councilmember McClellan about his age – somehow impugning his wisdom or ability to make wise decisions. That bothered me a lot. I just need to let you know that,” Cornett told Kalasho, then stated, “I want to thank you, Mr. McClellan, for your years of service to your city. I’m incredibly grateful for your wisdom, your input on this City Council and just want to take a 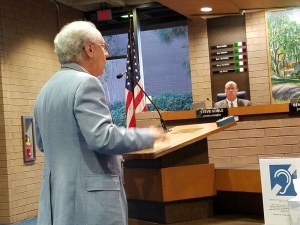 minute to honor you.”

At the second Council session, El Cajon Planning Commission member Tony Soteil (left) also brought up the issue of Kalasho’s behavior, saying, in part, “I have found Mr. Kalasho’s videos about the El Cajon City Council to be derogatory. Some of the things he has stated are half-truths, not whole truths. I wish it would stop,” Soteil continued. He said that the City Council must work together and “not be fighting with one another to see who can win over the other person.”  Soteil added, “If there is a legal problem, there is an avenue. It’s called going to the District Attorney and make the proper accusations. But if you have no proof of any illegalities, I think the half-truths being spurted out on social media should stop.” 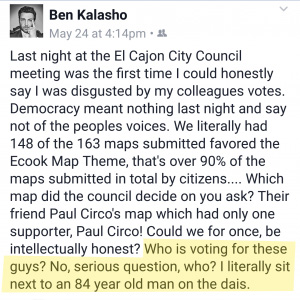 ut he did not respond. Councilman McClellan, asked about Kalasho’s post, told East County Magazine, “I’ve learned as a kid not to let those kinds of things get to me.”

Later in the Council’s afternoon session, after a report on a request to allocate an additional $70,000 for East County’s Transitional Living Center Emergency Shelter Program for the homeless, four Councilmembers approved the measure, but Kalasho abstained from voting, indicating he wanted more information.

After the meeting, Councilmember Kendrick was critical of Kalasho’s abstention. “It is ironic to me that four Republicans voted to approve the measure and the lone Democrat would abstain from voting,” Kendrick said. During the meeting, Kendrick stated, "I'm not going to throw women and children out on the street."

Kalasho, at a past meeting, introduced his own proposal to provide 20 city jobs for homeless people, but it was shot down due to liability concerns and the need to honor contracts with the city’s labor unions.

Eric Lund, who is heading up an East County Homeless Task Force, presesnted a comprehensive proposal to the council that included a new homeless services app to help homeless people find services, a homeless reunification program, hiring a housing navigator and rental assistance to support Crisis House, rental assistance for 25 homeless families for Crisis House, funds for an East County Homeless Task Force Director, a request for the city to consider converting another motel to a short-term shelter, providing four spaces at the Animal Shelter for dogs 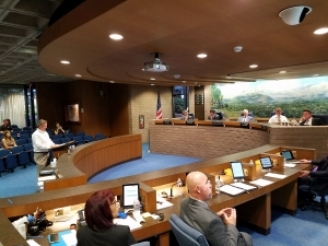 belonging to the homeless,  panhandling signage and more.  Total funding for all items proposed would be $196,435 if approved.

Several neighbors of a house allegedly inhabited by drug users in the 1500 block of Swallow Drive addressed the City Council about their concerns that drug activity and general disturbances were once again taking place. This is not the first time that the house has raised the hackles of nearby residents. The City has litigated against the owner of the residence previously. City Manager Doug Wiliford told the residents that in the past the City has “taken long steps” in attempting to resolve the issue; however, it will now pursue more aggressive enforcement of the court stipulations regarding the residence and its inhabitants.

A drawn-out discussion about a proposed adult day care facility to be based at the Babylon Ballroom (456 No. Magnolia) was the final agenda item to be considered by the Council at its evening session. The planned facility was initially approved several months ago, but then was denied a permit to operate by the El Cajon Planning Commission. The operators of the facility offered testimony which led the Council to require the Babylon Ballroom to present a detailed report by June 27th on the impact of increased traffic to the facility by shuttle vans.  Vicky Jones, owner of Advanced Dental Arts (185 W. Madison), expressed concerns about parking and general traffic congestion which could be caused by such a facility. The public hearing was continued to July 11th at which time the Council will decide whether to grant or deny the facility’s request to open its doors to non-medical impacted adults.

The City Council also recognized the 12-year contributions by outgoing City Clerk Belinda Hawley, who is set to retire on June 30th.