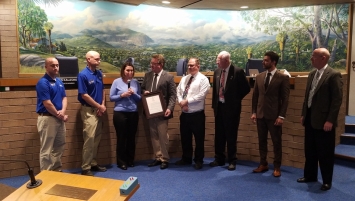 April 7, 2018 (El Cajon) -- El Cajon City Council members temporarily set aside their differences and got down to work Tuesday in what some say was one of their most productive sessions in recent months. 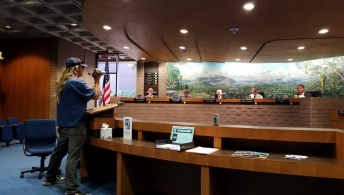 One Place That Will Go to the Dogs

The session began with the presentation of a $50,000 check from PetSmart Charities, Inc., towards the soon-to-be-opened new El Cajon Animal Shelter. The funds will go towards the shelter’s spay and neuter services. Construction of the new 14,700 square feet state-of-the-art facility began in May 2017 with funds derived from increased sales tax revenues collected through authority of El Cajon’s Proposition “O.” The half-cent sales tax passed in 2004 and ended in 2015. Funds from the special tax has paid for improvements to public safety facilities and the new animal shelter.

The shelter is expected to open on schedule in June 2018. Twice the size of the original shelter which was built some five decades ago, the new facility will include space for new pet enclosures, a full veterinary clinic, pet grooming, pet play and exercise areas, pet adoption services and more. According to city officials, the facility was designed with the future in mind and allows for an expansion if it is ever needed. 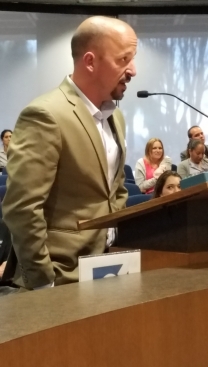 A Room at the Inn

El Cajon Mayor Bill Wells recognized the “soft opening” of the city’s first four-star hotel, a Courtyard by Marriott, which took place earlier in the month. According to the hotel’s general manager, Juan Allred, “The city has been very good to us.” He added, “Since opening several weeks ago, our occupancy has not dropped under 80 percent. This is a lot better than any of us anticipated.” In a short time span of some four weeks that it has been open, it has been ranked 38th out of 1,036 Courtyard by Marriott in its internal guest satisfaction survey.

The hotel currently employs 35 people from the El Cajon area, of which 23 are directly from the city. “We can rank ourselves to be in the top one percent in guest satisfaction surveys, but it is because of the individuals who work there,” Allred said.

As the hotel ramps up to its official grand opening on June 14th, it will be beginning to offer a daily “Happy Hour” between 4 and 7 p.m.

Mayor Pro Tem Gary Kendrick noted “a strong synergy” which will develop with the hotel once the East County Performing Arts Center, under the management of Live Nation, is re-opened, since the hotel is located a walking distance from the theater.

Following the resounding success of past year’s “TedXKids@ElCajon” event, Cajon Valley School District Superintendent Dr. David Miyashiro announced that the 2018 event will be held on Saturday, April 21st from 9 a.m. to 4 p.m. under the banner of “Beyond Infinity!” at the theater at Greenfield Middle School (1495 Greenfield Drive, El Cajon, CA 92021). Tickets for the event are $6. The event will also be live streamed on the event’s website at www.tedxkidselcajon.com. 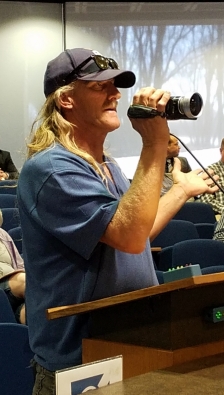 While members of the El Cajon City Council sometimes end up dodging verbal bullets from each other on the dais, the verbal bullets this time came from the public comment podium from well-known San Diego provocateur and self-described “activist and photojournalist” J.C. Playford.

Playford approached the public comment podium with his always-present video camera and played a recording of a confrontation with Mayor Wells prior to Wells’ recent event announcing his candidacy for U.S. Congress. After a few opening salvos and exchanging barbs with Wells suggested to Playford, “I think you’re done,” Playford continued his screed, stating, “You’re a piece of s**it.” Wells responded, “I would appreciate if you wouldn’t swear at Council.” At an earlier City Council meeting in early March, Playford berated Wells and referred to officers of the El Cajon Police Department as “thugs” and “Nazis” after Playford was denied entry to a press conference.

Playford is known for his antics in front of different government bodies, primarily in San Diego County. He along with another plaintiff filed a legal action in 2012 in San Diego federal court accusing the San Diego Sheriff Department and its officers of targeting him for retaliation for “videotaping matters of public interest,” and for violating of his U.S. Constitution First Amendment rights in the course of his “newsgathering” activities. The Ramona resident has filed numerous appeals to his original complaint and is now awaiting a verdict from the United States Supreme Court.

A search of the San Diego County Superior Court database shows that Playford has filed 26 lawsuits since 1996.

Following a presentation by Capt. Sean Kelsey of the Salvation Army at the February 27th session of the El Cajon City Council on what the charity had accomplished with the $5000 donation that it was accorded by the City Council in the last fiscal year meeting, the City Council earlier this month unanimously re-affirmed local community activist Stephanie Harper’s suggestion that the yearly donation be doubled. She said that if the city could afford to give yearly raises to the top management personnel, it should be able to afford to double its contribution to the organization. “We need to show how much we appreciate all they do for our community. So, I would like to request that you five make a motion to double the contribution to $10,000,” she said.

Councilman Kendrick stated, “We had a really great presentation by the Salvation Army about what they did with the $5000 we gave them to help senior during the holiday season. I was really impressed by how efficient they were, how they analyzed who needed what. They were really on the mark on what they gave to these people – things they can really use,” he concluded. “I want to thank Stephanie Harper for that suggestion.”

That recommendation by Harper was unanimously approved by council in a motion co- submitted by Council members Kendrick and Bob McLellan.