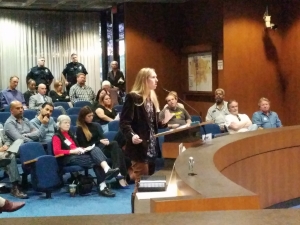 Several speakers during the public comment portion of the meeting expressed their disdain at the recently enacted temporary measure aiming to ban local community organization from feeding the local homeless community. The measure was tied to the County of San Diego declaration of a health emergency related to the 20 deaths associated with the outbreak of Hepatitis A over the past several months in the County. What was a minor legal housekeeping measure unanimously passed by the City Council in late October has turned into a major political hot potato pitting the City Council against San Diego homeless advocates. 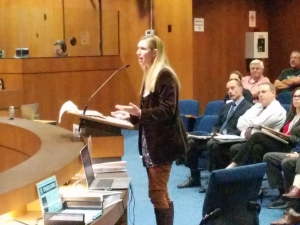 isposal of trash at the food distribution sites in El Cajon parks.

Things came to a head when a series of speakers criticized the City Council for its decision to enact the ban.

The first salvo came from San Diego activist Mark Lane who challenged the validity of the ordinance. “For most of my 52 years I have been involved with feeding the homeless through stuff my mother did with our church when I was growing up. I’m the founder of the ‘Breaking Bread Project’ that feeds the San Diego homeless in our public areas,” he said.

Looking up at the dais, Lane interrupted his prepared comment. “Mr. Kalasho, I would love if you would listen to me instead with what you do when you don’t like what other people are saying.”

Lane continued, “We sit down with homeless people, we bring people out one-on-one and have a meal with them and we talk to them and get to know them. First time we did this, a woman said, ‘You see me.’ Then I said, ‘Of course I see you.’ ‘You see me,’ she said again, to which I answered, ‘I don’t understand what you are saying.’ ‘Everybody walks by. They walk around. They walk across the street. You see me.’ 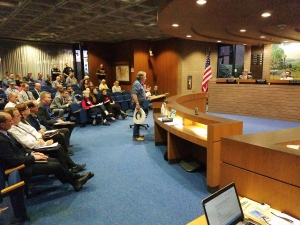 dressing Councilmember Steve Goble, who has spearheaded the ordinance, Lane added, “Banning the feeding of the homeless in the public areas goes against everything we are as a country. People who call themselves Christians. Individuals do not stay homeless because of food sharing programs. They stay homeless because a lack of available affordable housing, lack of job opportunities, and because of mental illness and physical disability.”

Before he left the podium, Lane roundly criticized Democrat Ben Kalasho for his purported attitude towards citizens addressing the El Cajon City Council and faulted him for being”disrespectful” for using his cell phone and iPAD during meetings after criticism for doing so. “That’s immature, unprofessional, disrespectful, and dismissive. You should really check yourself how you deal with constituents and how you deal with people in general,” he said. As he walked away from the podium, Lane received applause from a good number of people sitting in the audience upon returning to his seat.

Earlier in the Council session, in an impassioned comment, Councilmember Steve Goble said, “What we have done in the past is not working.  We must do something different. There is some talk about five-or-six touches.” He said there are seven groups in El Cajon that provide meals on a regular basis including Crisis House, which is not a faith-based organization, for those who say it is not fair for them having to go to a faith-based organization for food, Goble noted. He added  that there are over 50 outlets for homeless individuals to utilize EBT (Electronic Benefit Transaction) cards which may be obtained at the County Health and Human Service office near El Cajon City Hall. Individuals may call the county help line (2-1-1) to obtain a list of food providers, which include Jack In The Box, Dominos, Carl’s Jr., Cafe Bistro, and Denny’s.

Following Lane, Shane Parmely discussed how her own sister-in-law was allegedly homeless due to mental illness. She took on directly  the City Council’s approval of the measure. “I find this an extremely scary overreach of the government,” she said. “I think you didn’t think this completely through,” she said. “If there is too much trash being left behind, put out more trash cans.”

Wells asked Parmely, “Do you understand why we’re doing this?” Parmely replied, “I think I understand the reason why you are using this to justify it. I don’t think that it is a valid reason.“ The dialogue quickly devolved into a series of caustic quick exchanges between her and Wells.

Stephanie Harper of the East County Democratic Club expressed her disappointment with the Council’s action, as well. “You should be ashamed of yourself. Get ready for battle,” Harper pledged. 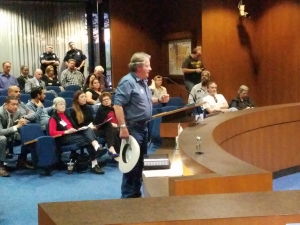 Not everyone was critical of the Council.  Harold Brown, Chief Executive Officer of the East County Transitional Living Center, said that they have been trying to look at alternatives while the ban is in place as was discussed at a recent meeting of senior area pastors. “The pastors on a whole, in conversations we have had, a lot of ideas have begun to be sprung forward on how we can still work our faith and our calling to feed the poor and the homeless and help people in those situations.” he said. “We looked at how we could do it differently at least temporarily as it has been happening. We’ve been told it has been a temporary thing that is not necessarily going to last forever. I know there are some people concerned about that,” Brown continued to say.

While local homeless activists have loudly complained about the action and regarded as burdensome to homeless individuals, it would seem that the ordinance by the El Cajon Council does have legal teeth in that the County of San Diego, mandated by State of California and is following the letter of the law. California Health and Sanitary Code, Section 114387 and Section 114355  to 114363 requires a Temporary Food Facility (TFF) Permit be applied for by any person or organization that either sells or gives away food at a public event. Introduced by Senator Sharon Runner and passed by the California State Legislature in February 2008, it requires that all food vendors, including existing restaurants, apply for a permit when participating in a temporary event.

The County of San Diego requires a permit to be obtained by both vendors and organizers providing food at least 30 days prior to the event.  According to an application form for a permit, Temporary Food Facilities must also meet all applicable requirements in CalCode Chapters 1 to 8, inclusive, Chapter 12.6, and Chapter 13, unless specifically exempted.

A separate “Warewash Facility Agreement” also requires that all food vendors must use proper warewash facilities and utensils as required by the Health Department for the duration of the event.

Bonnie Price with the East County Democratic Club thanked the Council for its action to partner with Live Nation to reopen the East County Performing Arts Center, noting that citizens speaking out helped to save the theatre.

She, too, opposed banning feeding of the homeless in public places. “I think you ought to prevent homelessness, and the one way you could do that here is to put in some rent controls.”  She notes that even Santee, under a conservative mayor, had trailer parks with rent controls.  “A lot of senior citizens live in those trailer parks and they are hurting. I personally know someone who became homeless because his rent went up too fast” to keep up with rent at the trailer park where he lived, she added.

Congressional candidate Pete Beauregard, a former Navy Corpsman in Vietnam who founded  a free clinic to treat street people  “We found out we were working within a higher power” he said, adding that there are “universal precautions” that can be taken to assure safety. He likened efforts by clergy and citizens seeking to feed the homeless to “a guy 2,000 years ago who did the same thing.”

In other city business, the City Council approved a revote of an ordinance approving of liens on property for owners who are not paying their trash bills. Councilmember Kalasho recused himself from any vote or discussion because he accepted a $2500 donation from Waste Management, then voted on the matter when it first came before Council—an apparent violation of state law which prohibits elected officials from voting on matters in which they have a financial interest if the official has received income or promised income totaling to $500 or more in the previous twelve months.

The San Diego Union-Tribune has reported that the city’s director of public works has had to spend $3,420 to re-notify property owners and prepare the Council revote.

The City Council also honored retired U.S. Navy Capt. John R. Campbell as the 2017 “Veteran Of The Year.” Campbell served from 1956 through 1982. He served on eight ships including two destroyers, two cruisers, three service four ships (tender ships), and an aircraft carrier as well as several on-shore assignments. On retirement he has worked on many local community projects with the Kiwanis Club. In accepting the award, Campbell said that “fighting wars are a young man’s game. I was just as happy to give it up as I was to start it." He and his wife have made El Cajon their home for almost 50 years.