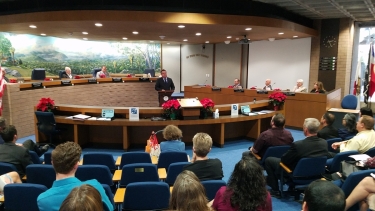 Wells cited major accomplishments including the new car dealerships which are now calling El Cajon home, including the recent grand opening of a 73,000 square foot Mercedes Benz dealership and the planned building and opening of a Jaguar/Land Rover dealership in 2018. He also mentioned the four story, 120-room Courtyard by Marriott hotel development scheduled for opening in January 2018, and the future development of a 96-room Hampton Inn by Hilton hotel that is set to occupy the former land space of the El Cajon Police Department on Fletcher Parkway.

As a part of the “El Cajon Valley of Cars,” Wells also mentioned the expansion and upgrades done by the BMW dealership, as well as El Cajon Ford and Kia. “This is really important,” he said, “as any business enterprise or city, we have to make sure that we bring in revenue to provide for vital services, police officers, firefighters, and the great community events we do, because everything we do in El Cajon costs money,” he said. “Cities often only talk about raising taxes to bring money in. By focusing on things that we are good at, like car dealerships, it is a way that we can bring in significant revenue from throughout the county without raising taxes on our citizens.”

Wells said that with the sunseting of a half-cent sales tax generated by Proposition “O” (which was passed by voters in 2004) has allowed construction of several new public safety facilities and a new animal shelter set for opening in 2018, and gives El Cajon the distinction of being the only city in California which has lowered its sales tax.

In terms of residential growth, Wells spoke about the building of some 300 new residential projects, and the future development of a housing project on the site in the city center presently being occupied by the Salvation Army.

While the city has experiened an overall significant economic expansion, it has had to grapple – as most California cities -- with the significant rise of indigent individuals whose home are the streets of El Cajon – in which Wells said is being dealt with “in a strong and meaningful way.” He said that the city has implemented which he called “unprecedented strategies” to deal with the problem. Those strategies have included partnerships with several community organizations including the East County Chamber of Commerce, the East County Transitional Living Center, the Salvation Army, and Crisis House, as well as other community charities and support organizations. 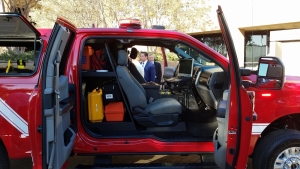 During the past year the City of El Cajon has acquired a “Squad Six” emergency vehicle which can respond to emergency situations not needing a full engine truck company.

Wells concluded his address with news of the future much-anticipated re-opening of the East County Performing Arts Center. “Finally, perhaps there is nothing more exciting in El Cajon than an announcement of an agreement with LiveNation to manage and market the theater,” Wells said, shortly before the Council ratified that agreement in a unanimous 4-0 vote immediately after his speech. “Never in our wildest dreams did we think a worldwide concert producer as Live Nation would be taking us on to bring their top quality 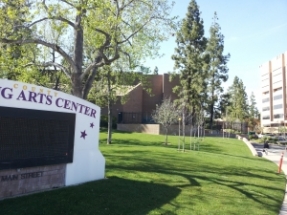 events and talents to El Cajon.”

For that, Wells said that he could not take credit for partnership, but was quick to credit El Cajon City Manager, Doug Williford, for his efforts over the past year-and-a-half to bring the concert producer and management firm to El Cajon.

Wells earlier also acknowledged Councilmembers Steven Goble, Gary Kendrick, and Bob McLellan saying, “These are your local elected officials and I want to personally thank them for their dedication and the hard work they put in constantly on your behalf,” as he encouraged the near-capacity audience to express a round of applause. Wells did not mention embattled Councilman Ben Kalasho, with whom he has had several imbroglios over the past year; Kalasho was absent from the address, citing a “family emergency.”

In an exclusive interview with East County Magazine, Wells said he is confident that he and the City Council has handled situations well in terms of dealing with immediate challenges presented by the homeless situation and the outbreak of the Hepatitis A virus which has led to 20 deaths in San Diego County. The City’s actions have also included a temporary ban on feeding the homeless in public parks during the Hepatitis A emergency declaration by the County, a move that has drawn praise from some but criticism from some activists for the homeless.

“The issue is really about hepatitis A, and saving lives. I know that people have manufactured outrage about this but if you think about it nothing has really changed. The homeless can still be fed and the churches can still feed them. The only difference is location and that's a small price to pay if it can save lives,” Wells said.

As for things which might have been handled differently, he would have hoped that an agreement with LiveNation could have been reached faster. “I would have liked to have been able to finish the Live Nation contract more quickly so we could have the Performing Arts center open sooner. Of course, we have to be even more proactive about the homeless problems. I know we've learned a lot this year and for that reason alone we will be more effective.“

That this council would allow a car dealership in its current location shows its members are more loyal to the almighty dollar than they are the citizens of El Cajon. A more unfitting location could scarcely have been chosen, and this one is already having an adverse affect on the lives of citizens in the area. Those living in Fletcher Hills must now find alternate routes to enter or exit their neighborhood or face the additional traffic congestion created by a car dealership that clearly doesn't belong on an access road to these residential neighborhoods. The council years ago rejected a new Home Depot on the east side of town because its proposed location would have caused similar issues for those living in the area; this included then mayor Mark Lewis who adamantly opposed it. But this council clearly does not give a rat’s behind about those who must now must deal with the lasting adverse effects of their latest disastrous decision. Enjoy the revenue, gentlemen, it comes as an extremely high cost.
Several emails and letters have been send to media, government officials, and utility companies, and the most recent today was also copied to the CPUC in response to the unbelievably extreme power/phone outages currently being experienced by backcountry residents. Community meetings are being planned, date, time and location TBA. Those of us in the greater Descanso area alone have experienced 11 outages since 9/30/2017, for a total of 16 days to date. This abuse of public utility powers must stop! Community meetings are being planned so residents may air their complaints publicly. We have been in contact with Supv. Dianne Jacob's office, she has publicly stated her outrage at this abuse of power and the difficulties caused for residents. Senator Joel Anderson's office has been contacted with the same information and has been very supportive of our efforts to rectify this situation. The ongoing risk to residents, especially those with medical issues in the home, cannot be tolerated any longer. Please help us to stop SDG&E's and AT&T's abuse of power over our communities.