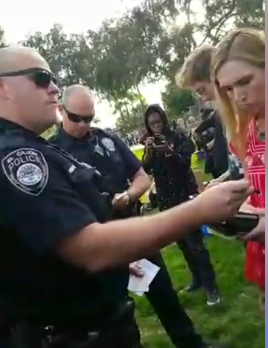 The ban does not apply to feeding homeless people in churches or other private property, and El Cajon Mayor Bill Wells recently attended a homeless feeding at a local church where local refugees helped feed the homeless; the Mayor praised that effort as “the right way” to help the homeless.

Mayor Wells, when contacted by East County Magazine tonight, said that he was not aware of the police action.

“The police are always on their own in these types of actions,” he said. “They are out there enforcing laws.” When asked about the optics of such an action on Martin Luther King Jr. Day weekend, Wells said, “It is all about people complying with the law.”

But homeless advocate Mark Lane told KUSI News that the civil disobedience in El Cajon was in line with Rev. King’s own actions. "Martin Luther King said that if a law is morally wrong, you are obligated to reject it. And yes, it is absolutely connected to Dr. King and what he did. Following in his footsteps, and not comparing myself to Dr. King because he is a great man-- I'm just a guy causing trouble-- it's a morally corrupt law, a morally corrupt law with no basis in scientific fact.”

At the last El Cajon City Council meeting, Lane made clear his intent to continue feeding the homeless despite the ban. Lifting his hands in the air and turning to several El Cajon police officers situated in the back of the chamber as though they were manacled, he taunted, “Here…arrest me.”

Lane contends the city is using the Hepatitis A outbreak as a “scare tactic.”

Advocates for the homeless say the real public health hazard isn’t feeding the homeless, but rather bathrooms in Wells Park that have remained closed for weeks due to a sewer line break.

Assistant City Manager Graham Mitchell at a recent Council meeting that in that the expense on replacing was high, it would be some time before repairs could be made.

Amateur video shot and uploaded to the Facebook page of local activist and Assembly candidate James Elia shows El Cajon Police Department officers writing citations, as members of the protest group cheered on in support of those issued the citations.

Elia’s video indicates the group plans to return in two weeks and that those arrested are planning to file a class action lawsuit against the city.

A 2008 state law, however, requires that counties actually mandate permits for food service at public events.

That law, however, may conflict with the U.S. constitution.

David Loy, legal director of the American Civil Liberties Union (ACLU) San Diego, in a December 6, 2017 letter to El Cajon City Attorney Morgan Foley, stated that the ordinance “presents significant First Amendment concerns” because it prohibits food sharing only for “charitable purposes” and thus is “punishing only those who share food to express their religious or political beliefs in ministry or charity but not those who share food for other purposes.”

While protecting public health is a compelling governmental interest, Loy observes, the city has less restrictive alternatives for preventing disease transmission, such as a permitting and inspection program, proper sanitation and food handling requirements, and enforcement of existing laws against littering.

ECM has previously reported that the El Cajon Council’s action from late October may be justified by state law passed by the California Legislature in 2008. The California Health and Sanitary Code, (section 114387 and section 114355  to 114363) requires a Temporary Food Facility (TFF) Permit be applied for by any person or organization that either sells or gives away food at a public event. Any court challenge would, then, have to resolve the apparent conflict between state law and federal Constitutional concerns.

Gary Kendrick, a member of the El Cajon City Council, said that the ban on the feeding of homeless individuals has been misconstrued by the protesters.   because the city has not “banned” the food distribution, but only on City of El Cajon public property.

The County is expected to lift the Hepatitis A emergency declaration in the next few weeks, as the number of new cases has dropped sharply.  Until then, one potential solution to avoid litigation could be for the city to amend its temporary ordinance to allow public feeding of the homeless provided those distributing food follow safe food handling rules, get a permit, and clean up any litter afterwards.

East County Magazine made multiple calls and e-mails to City of El Cajon’s Public Information Officers Monica Zech and Lt. Rob Ransweiler to confirm details of the police action and who ordered the arrests, but they were not available. An on duty El Cajon Police Watch Commander said that all media inquiries were to be directed to the El Cajon City Manager’s Office, but the City Manager also could not be reached this evening.