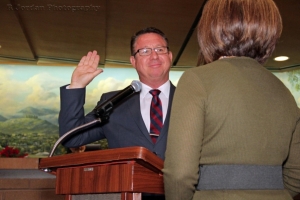 Wells praised the work of city employees, UT San Diego reported. ““To run a city of this size, it takes a lot of people. To fight fires, save lives, solve crimes, pave the streets, make sure street lights work, make sure the sewer system works, make sure kids have a play soccer, none of this happens seamlessly,” he said, but added, “I don’t want to paint a picture that everything is perfect. We’ve got lots of challenges ahead of us. We get up every morning thinking, ‘How can we help?’ not, ‘How can we fix.’ There are things government can’t do, but we’ll continue to fight the good fight and attack some of (our) problems.”

He credited the work of City Manager Doug Williford for the opening of several new car dealerships encompassing BMW, Volkswagen and Mercedes-Benz brands in the city over the past year along with a major expansion of Motoworld, as well as the building of a new Borrego Health complex. Wells also cited two upcoming major future construction projects consisting of a new ten-story Kaiser Permanente facility on East Main Street and Greenfield Drive and a future 110-room four-star Marriott Courtyard Hotel to be built adjacent to the shuttered East County Performing Arts Center, which itself, is set to reopen after major renovations and upgrades have been completed.  The end of the city’s half-cent sales tax in 2015 is expected to bring additional retail sales to El Cajon.

“The flurry of activity over the past two years has been unprecedented in our city,” he said. By a continued concerted effort to encouraging a business-friendly environment, new developments combined with the creation of new jobs “has helped El Cajon rebrand itself,” Wells stated. “This represents not just an improving economy, but also an increasing realization in the business community that El Cajon is becoming an outstanding place to locate high quality businesses.”

The Mayor acknowledged the leadership of Chief of Police Jim Redman and the efforts of the police department in attaining a twenty-four percent reduction in crime over the past four years in El Cajon. This, he said, was due to their concentrated efforts on bringing about crime-free multi-housing and crime-free hotel/motel programs.

In creating “benefits for our citizens,” Wells cited the building of the new public safety/police station, the building of a new fire station on Madison Avenue and a program to upgrade all three other fire stations in El Cajon. Finalizing the renovation and the re-opening of the East County Performing Arts Center, a new animal control shelter, the recent re-opening of Hillside Park and the future renovation Renette Park and Bill Peck Park are also slated for completion. A grant from “KaBOOM!” a national non-profit dedicated to bringing balanced and active play into the daily lives of all kids is bringing about the renovation of Bostonia and Wells parks.

In spite of all of the good news, Wells was quick to emphasize a note of caution. Despite pension reform issues (a matter of concern for many California cities), the overall fiscal solvency of El Cajon continues to be a concern as the city has actively worked towards paying out unfunded pension requirements and

With El Cajon being home to the second-largest Chaldean-American population in the United States (topped only by Detroit), Wells said that the city would keep actively reaching out to its large immigrant community. Last June’s “America On Main Street” event drew some 30,000 participants. Next month the city council will vote to assist funding media production efforts to benefit the Middle Eastern community.

Followed by the City of San Diego, the largest cities in the county are Chula Vista, Oceanside, Escondido. El Cajon is the fifth biggest urban area in San Diego County with a population of over 100,000 people.