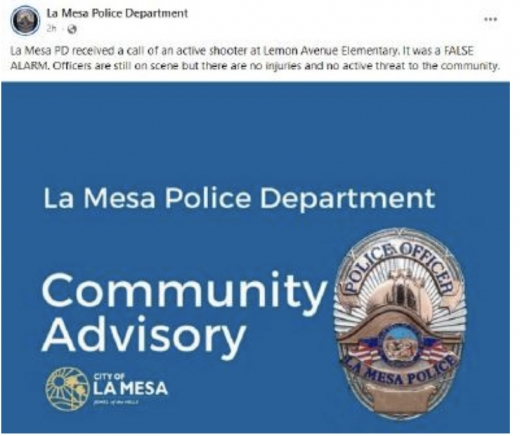 January 24, 2023 (La Mesa) – Neighbors near Lemon Avenue Elementary School reporting seeing 15-20 police cars and a SWAT team late this afternoon.  The La Mesa Police Department sent a Nixle warning of police activity near Lemon Ave. and Glen, but at 4:19 posted this message on Facebook:  “La Mesa PD received a call of an active shooter at Lemon Avenue Elementary. It was a FALSE ALARM. Officers are still on scene but there are no injuries and no active threat to the community.”

What triggered the false alarm and full-fledged response from law enforcement?

The principal of Lemon Avenue Elementary, Natalie Jager, sent a message to parents with this explanation:  “This afternoon after dismissal, our digital emergency response systems and a call was mistakenly sent to the La Mesa Police Department. The police responded as we would expect, and sent emergency response teams to our campus to ensure the safety of the staff and students in the after school program. Please be assured that all is welland no one was ever in any danger.”

On the La Mesa Happenings Facebook page, some parents voiced dismay that families and neighbors were mistakenly left “terrified,” as one parent put it.   Another reported a police helicopter overhead with the school in lockdown and said parents were advised not to come to the school.

Several voiced dismay at not being informed about what children may have seen. One mother posted a photo of armed officers running on campus.  Another said her young daughter told her, “Police with big guns came.”

But other parents expressed relief to see such a swift and strong law enforcement response.

“That’s fantastic that so many police came and we’re ready,” one parent concluded. “That makes me feel safer.”