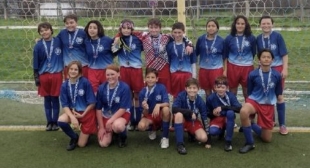 January 18, 2023 (Alpine) – Roth Ward, a coach with the Mountain Empire U14 Patriots AYSO Soccer Team, has launched a GoFundMe account to send team members to a championship tournament.

Coach Ward says on the fundraising page, “We have had a heck of a season going 11 - 1 - 1. We went 4-0 in the Area 11 Tournament of Champions allowing us to represent Area 11 in Lake Forrest on February 4th and 5th.”

Next came Allstars. “As you know we are a small community and we have only one U14 team in our area. So, unlike other teams who pull multiple teams together, we were happy to keep the 15 players we had all season to compete in the Area 11 All-Star Championship,” Ward writes. “We were certainly the underdog, but after 4 hard-played games, we walked away with the Championship! This win brings another invitation to Lake Forest on February 18th and 19th.”

Coach Ward says he started the fundraising page because “We want to make sure all players and families will be able to make the trip up north. Gas, Food, and Lodging for 2 weekends in the same month will take a toll on family budgets. We hope that we can take some stress off this by raising money for these great kids.”

You can donate by clicking here: GoFundMe