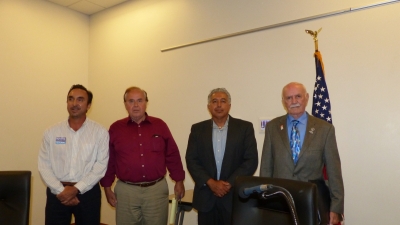 Candidates also addressed the current board’s controversial sale of land in El Monte Valley for sand mining.  Louis Tejeda, a former Helix Water employee, claimed the board sold the land for too little, but was not opposed to sand mining the valley.  Gracyk said if the developer defaults on a payment due in the future, the land should come back to Helix to halt the project.

McMillan called for water budgeting as was done in the  Padre District to scale water rates based on family size,  lot size,and number of animals. Gracyk and Tejeda voiced support for the concept but Linden  said Helix is too large a district and that the cost to implement would be too high.

McMillan, who previously served on Padre Dam Municipal Water and San Miguel Fire Board, acknowledged prior bankruptcy but said he learned from the experience and cited his financial management experience in business.

Linden pointed out that while rate hikes are unpopular,  Helix has substantial infrastructure to maintain.  He also cited the case of Rainbow, California, where a board voted against rate hikes and suffered major infrastructure failure.  He spoke of the district’s history of looking forward decades in planning for the future. Other candidates claimed there are ways to cut expenses further to avoid hefty hikes and perhaps roll back rates slightly.

All challengers support moving board meetings to evenings so more people can attend. Linden said he would consider that if it is brought for a vote.

Note: Audio was trimmed slightly to fit the radio show's one hour format and a question on residency had to be omitted; all candidates indicated they live in and own property in the district.

Three seats are up this election.  The incumbents are running for reelection in all 3 seats.

One,  Joel Scalzitti,  is running unopposed.

Incumbent.Linden is running against Mark McMillan and Lou Tejeda, as well as Aaron Zajac who was a no-show at the debate.

Incumbent Chuck Muse and Eric Collins, who did not participatein the debate, are running against Mark Gracyk.

The Board President is Deana Verbeke.

You can find a list of meeting dates, times and agendas here: http://hwd.com/meetings-and-agendas-2/

I don't know how much their salaries are;  if anyone has that info handy, please post with link to confirm. I couldn't find it in a quick search just now on the Helix website.

I was impressed when Dan McMillan yielded to Louis Tejeda on El Monte Valley, but was most satisfied with Mark Gracyk. Kudos to incumbent John Linden for showing up and defended his record, which avoided a Flint like water crisis by raising rates instead.