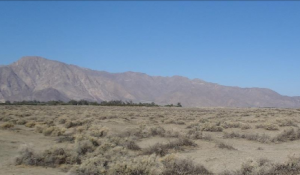 April 4, 2014 (Borrego Springs) – Invenergy Solar Development has acquired Soitec Solar’s Desert Green Solar Farm, a 7 MW solar project slated to break ground this month in Borrego Springs. The project will include over 2,800 soitec concentrator photovoltaic modules using dual-axis tracking technology.  Commercial operation is expected to begin by the end of this year.  San Diego Gas & Electric has signed a long-term purchase agreement for power from the project, which will hook up to the existing Borrego Springs substation.

View project documents on file with the County of San Diego here.  Mission Indians have voiced concern over Native American cultural resources on the 45-acre site set for construction on undeveloped land just north of Palm Canyon Drive. The solar facility will be visible from the Borrego Airport, Highway 78, Monument Valley Road, and Anza Borrego Park including Font’s Point.  The Mission Indians have raised concerns in a cultural resources report over destruction of cultural resources on the site, including potential desecration of prehistoric human remains.

"Invenergy is pleased to reach this agreement with Soitec, as California continues to lead the nation in its support for renewable power generation," said Jim Shield, Chief Development Officer at Invenergy. "Desert Green is a real milestone for Invenergy as our first clean energy project in the state. We're proud to invest in Borrego Springs, and look forward to a long and successful relationship with the community."

SDG&E has entered into five power purchase agreements for 155 MW with Soitec. Desert Green will be the first to start construction.  The modules will be built at the French-based company’s factory in Rancho Bernardo, a San Diego community. Soitec employers over 250 people at its local factory and predicts that its Desert Green project will produce 50 jobs during peak construction, producing enough power to fuel close to 2,000 homes and displace close to 5,000 tons of carbon dioxide per year, the equivalent of taking 1,000 cars off the road.

"This is an important milestone occurring shortly after the first year of operation of our San Diego factory and demonstrates Soitec's success in executing its strategic plan to complete its portfolio of CPV projects supporting the San Diego factory," said Clark Crawford, Vice President of Sales and Business Development. "Invenergy's clean energy industry experience and track record of raising project finance - along with its proven construction and operational capabilities - will ensure that the Desert Green project is completed and operated with the highest standards."

"SDG&E looks forward to working with Invenergy as it builds a new source of clean, homegrown energy here in Southern California, helping SDG&E to meet its state Renewable Portfolio Standard goals," said James Avery, Senior Vice President of Power Supply at SDG&E. "SDG&E is proud to have spurred Soitec's investment in the local CleanTECH cluster with its San Diego factory, and the PPAs using Soitec's CPV modules will help SDG&E to meet its RPS goals."

Soitec’s project in Newberry Springs in the Mojave Desert has drawn controversy over its scraping bare vast tracts of desert and glare issues.  In San Diego’s East County, hydrologists have calculated that Soitec’s proposed solar projects in Boulevard could drain excessive amounts of groundwater during construction, potentially destabilizing the ecosystem of the region and disrupting wildlife corridors.  Residents have also voiced opposition to the solar modules as visual blight; each is approximately 30 feet tall and 60 feet wide.

"It would be thousands of those 'concentrating' Soitec solar panels in Borrego Springs," said Kevin Emmerich with Basin & Ranch Watch, an environmental protection organization. "It is just 7 megawatts but would still be quite an eyesore."

Another backcountry tragedy. How many times, I wonder, will it be repeated. We are destroying land, plants and animals for the sake of...what again?