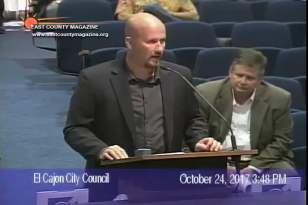 November 1, 2017 (El Cajon) -- El Cajon’s City Council on Tuesday voted unanimously to ban feeding of the homeless in public places due to hepatitis concerns, fill a vacancy on its veterans’ commission, and approve a residential housing development. But the most contentious moments came during an impassioned plea from a citizen calling for Councilmember Ben Kalasho to resign, over objections of Kalasho, who sought to silence the resident from speaking out.

A measure banning public distribution of food from Wells Park and other public venues by local charities within the City of El Cajon was unanimously passed. The “urgency ordinance” will be rescinded once the ongoing Hepatitis A public health emergency has been declared concluded by the County of San Diego,

The action was prompted by the Public Health Emergency declared by the County on September 1st and the state on October 13th due to public health, safety and welfare concerns related to the Hepatitis A outbreak, which has included dozens of cases in El Cajon. The council discussed the definition of "food sharing event" as being a non-social gathering “that is planned, organized, promoted or advertised where food is distributed or offered for charitable purposes at no cost, or for a nominal charge, to any member of the public.” But the approved “urgency” ordinance does not apply to privately organized family reunions, birthday parties, baptisms, youth sport team celebrations, school field trips, and wedding anniversaries.

The call for Kalasho to resign was made during the public comment session by Nathan Cornett, who previously voiced concerns to the Council on redistricting as well as over Kalasho’s age-related slur regarding Councilmember Bob McClellan last spring.  Cornett expressed his frustration with the controversies Councilmember has been involved with during the past year. View video:  https://www.youtube.com/watch?v=sf46vZIPhCg&feature=youtu.be

As Kalasho rocked back and forth in his seat on the dais, Cornett began, “Many people voted for you, Ben, because they believed and believe in your ambition, your charisma, and you shake things up on the council. Many of those same supporters are like me, disillusioned with you and feel somewhat ashamed of their decision to support you. I believe that Ben Kalasho should resign his seat on the City Council.”

Cornett’s reasons for asking Kalasho to resign included current allegations of fraud reported by the Union-Tribune and Los Angeles Times, as well as a prior case which Cornett referred to as a “conviction” but which in fact was a civil, not criminal case, in which a jury found Kalasho had committed fraud in a case involving his car wash.

Kalasho interrupted Cornett, and asked El Cajon City Attorney Morgan Foley whether Cornett had standing to voice his opinion and whether as a matter of procedure, such comments should be limited to the scope of city business.   Mayor Wells observed, “This is public comment.”

Cornett continued his remarks which included references to accusations which have been lodged against Kalasho of sexual harassment in connection with his Miss Middle East beauty pageant.  Kalasho has denied allegations of what Cornett characterized as Kalasho’s “sexual power play over women who over healthy competition and self-empowerment are trying to better themselves in the community. Will the public of El Cajon give Ben Kalasho a pass for this kind of alleged piggish behavior?” he asked.

Citing an example, he stated, “On Ben’s Facebook page he refers to his opponents as ‘cockroaches’ – and then he said, ‘you know what happens to cockroaches, right?’” Cornett said he had discussed with his wife plans to offer a public reproach of Kalasho, but she expressed her concern for her husband’s safety if he spoke out at the Council meeting.

“Fear and intimidation. This kind of political leadership in our city is what motivates me to stand here today and publicly condemn and humbly request a resignation from Council Member Ben Kalasho. I want better for our city and I believe our public servant ought to be held to a higher standard,” Cornett concluded.  “What type of social media posts about me or my business after today? Will our livelihood be threatened by Ben Kalasho after this day? Do I become an enemy of Ben Kalasho to be referred to as a cockroach worthy of crushing? These types of concerns should not come from our elected leadership. And I refuse to give in to fear and intimidation to be received by you, Ben Kalasho.”

East County Magazine asked Kalasho via email to respond to the comments offered by Cornett. Kalasho has continued to refuse to directly answer ECM’s serious questions, as with other recent articles. Instead, he responded with slurs and defamatory attacks on ECM’s reporting team and award-winning media outlet, which our editor will refute in a separate article.

As well, ECM has once again reached out to Linda Nickerson, the president of the El Cajon Democratic Club, a local political organization which has in the past supported and endorsed Kalasho in his bid for the seat he now occupies on the City Council.

At the second Council session held in the evening, a past president of the El Cajon Valley Lion’s Club, Kiley Grunstad, was unanimously approved as the newest member of the City of El Cajon Veterans Commission for the term of four years and two months. The Veterans Commission serves in an advisory capacity to the El Cajon City Council and the City Manager, makes recommendations to the City Council and the City Manager on military veteran related issues, ceremonies, events and activities that occur within the City.

The meetings of the Commission provide a forum for discussion of issues relating to military veterans, and provides advice and assistance to City residents regarding resources available to veterans’, and their spouses and dependents. It also serves as conduit of communication and coordination between the local military veteran community and the City of El Cajon. The other commissioners are George Glover, W.T. “Mack” McFarland, and Ted Kagan.

Grunstad served in the U.S. Navy from 1993 to 1997 and was stationed at Pearl Harbor, HI. Besides his involvement with the El Cajon Valley Lion’s Club, he was previously Post Commander of the American Legion Post 915 in Fredericksburg, VA. He has also been involved locally with many organizations including the Mother Goose Parade Association.

The final issue addressed by the City Council was a 49,223 square-foot gated planned unit development of low-density housing located at on the northwest corner of the intersection of West Main Street and Dewane Drive. After hearing testimony from the developers and designer of the homes, the project was approved unanimously by the city council with councilmember Gary Kendrick abstaining. There were no speakers during the public comment period against the development.