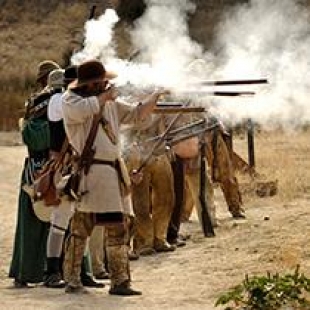 September 24, 2017 (Mount Laguna) — If you stop by the Laguna Mountain Rendezvous October 13-21, you’re likely to feel as though you’ve been transported into the past –a mountain man encampment bringing history to life.  Activities for participants include black-powder shooting instruction, archery, tomahawk throwing, tool-making, camp stove cooking, early American music, and a traders’ row selling vintage and replica items from Colonial times in the 1770s through around 1840.

In an exclusive interview, Richard Emms, president of the Laguna Mountain Shooting Club, resident gunsmith and Rendezvous Booshway (leader of a group of mountain men)shares insights on how the group got started and what attracts folks to don historical garb for the 10-day encampment in period-style tents. 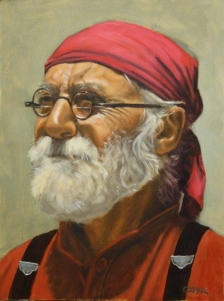 “The very first Rendezvous west of the Mississippi was in 1825,” says Emms (portrait, right). “Most of the mountain men were fur traders and hunters. They brought their furs down to the Rendezvous and there were vendors and buyers there who would give them money or tarde goods that were taken to the east coast and sold.”  Even earlier, before the French and Indian War, a Rendezvous-like gathering with mainly French fur traders was held on the east coast.

But when civilization came to the West, including the California gold rush, fur traders could simply go down into town and sell their wares.  The last Rendezvous was held in the 1840s.

But now a revival of interest has sparked Rendezvous gatherings across the U.S.  The Mount Laguna Rendezvous invitation boasts of having “the finest mountain man encampment in the Western U.S.”

Don Densford started the Laguna Mountain Rendezvous back in the 1970s and is the current vice president.  “He’s 80 years old now and still the best shot in the club,” says Emms.

Originally from upstate New York, Emms is a retired Navy engineer and retired auto mechanic.  His secretary, Mike Hite, owns a plumbing supply company.  Participants are from “all walks of life,” he says. 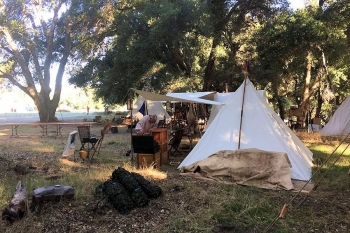 The local Rendezvous started on Mount Laguna and moved to a private ranch in Santa Ysabel and later, to its current location at the Mataguay Scout Camp on an undeveloped plot dubbed the Northwest Territory, nestled among groves of oak trees.  Hite is purchasing the land and the club is working on a trust agreement to grant them rights for use in perpetuity for Rendezvous events.

A highlight for many participants is shooting with muzzle-loading, black powder guns used before the advent of smokeless powder.  Most shot round balls and all had to be loaded down the muzzle.

Emms specializes in making replicas of flintlock guns from the Revolutionary War era. “Some of us are purists. Once you’ve shot one, it’s wonderful,” he says, adding that the guns are easier to clear, have different burning properties and very little recoil compared to modern guns.  Hunters must be accurate, however, using only a single shot with a muzzle-loader gun.

Others use guns with a percussion cap in which a hammer’s impact ignites the gunpower, instead of flint and steel, much like the primer in a modern cartridge.

“Probably the longest-range guns we have are Flintlock style Pennsylvania rifles with accurate range up to 200 yards,” says Emms. “Most of what we shoot are rifles…the bullet comes out spinning and are very accurate. But we do use a few muskets…that can be compared to a modern shotgun which has a smooth bore.” The latter can also be loaded with bird-shot. 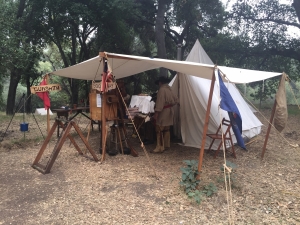 California has a separate hunting season and recently added 10 days onto deer season for flintlock guns only.  Most hunt in areas where lead shot is allowed and the club recycles its lead.  Bismuth is an environmentally cleaner alternative but costs more.  However, starting next year, lead shot will be illegal statewide under a new law.

A few use antiques which must be first checked for safety, but around 98 percent shoot with replicas.  Kits make it easy. “With some sandpaper and screwdriver, you could end up having one,” says Emms, adding that no background checks are required.  Why?  “If you’re a criminal, you’re not going to knock off the 7-11 with a gun that’s five feet long,” he explains.

Emms, however, makes custom guns that he crafts himself, without kits. If you visit the rendezvous you can hear his talks on these special guns, or stop by his tent to view his collection and ask questions.  He dresses up, sometimes in Colonial garb, other times in buckskin as frontiersmen would wear.

Visitors are encouraged to dress in period attire if they wish, and all participants do so, even after hours. They camp in period tents, cook over an open fire and use only candlelight as illumination after dark.  Participants learn how to pitch and take down a tent, as well as maintain a primitive campsite.  AT one Rendezvous, Emms recalls, “my tent survive 90 mile an hour winds that went on for three days.” The aroma of flame-roasted sausages or other foods may waft through upwards of 50 camps, depending who is doing the cooking.  Creative campers have even come up with ways to cook birthday cakes on site.

Period musicians include Age of Discovery seen in Old Town and Fiddlin’ Friar, who Emms says is “absolutely phenomenal.” You may hear instruments such as mandolin or guitar as well as singing.

Rangemasters help teach skills.  “We’ve had kids as young as six years old” with a parent and certified rangemaster, Emms said.  “We give them a small gun with cross sticks.” 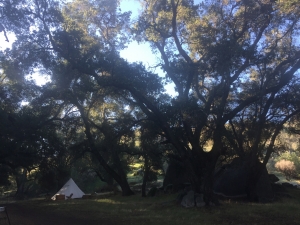 Tomahawk throwing is perhaps the most dramatic skill taught.  “A tomahawk was a tool and it was also a weapon,” Emms explains, adding that on the frontier, “they never actually threw a tomahawk.   Why throw away your weapon? But it was a favorite sport at the Rendezvous.”  Adults and even kids can learn to throw a tomahawk.

A highlight at the end of each Rendezvous is stake shooting, actually peeler logs from Home Depot that are hardwood stakes left after layers were removed for plywood.  “We bury them in the ground and shoot like the redcoats are coming,” Emms says.

Visitors are allowed to watch, though not participate in, certain activities such as the stake shooting. “The more heckling you do, the better,” Emms advises. For example, you might shout, “My grandmother can shoot better than you!” 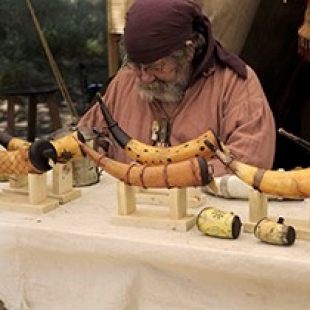 You can also shop at Trader’s Row for period clothing (need a Halloween costume?), knives, camping gear, guns, pots and pans, candle lanterns, beads, and trinkets for children such as pennywhistles and miniature tomahawks.

“A couple of years ago, we put on a conference for foreign media,” recalls Emms. The press wanted to learn about the life of mountain men popularized in the movie “The Revenant” starring Hugh Glass. The story centered on a true tale of a mountain man who attacked a bear attack, though Hollywood used creative license in making up some other details. “He never had an Indian wife or son,” says Emms.

A period advisor for the movie turned out to meet the foreign press. “We even had a horseman there; they got to ride horses, shoot the guns; they got to do it all,” says Emms.  Though there was no snow, “I got up in the morning that December and my water bucket had frozen,” he recalls.

Minus the horses and frozen ice bucket, you can experience the other skills from mountain man days at this year’s Laguna Mountain Rendezvous.

Admission to the Rendezvous is just $5 for a day pass.  Children are free.  Admission is also free for Scouts in uniform and military with active duty ID cars.  Space for vendors is also free.  (Dogs are not allowed, so leave pets at home.)

You can register to join the 10-day encampment or day-shooting here:  http://www.lagunamountainrendezvous.com/PDF/RegForm_2017.pdf

To learn more, you can visit www.LagunaMountainRendezvous.com or visit the Facebook page at https://www.facebook.com/Laguna-Mountain-Rendezvous-154665167884580/.