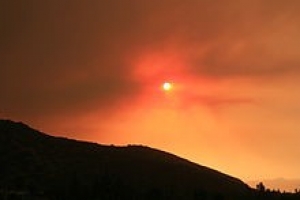 December 9, 2014 (San Diego)--Over 2,600 lawsuits were filed against San Diego Gas & Electric Company over damages from the 2007 firestorms that devastated our region.

The California Public Utilities Commission found that arcing power lines owned by the utility started three of the major fires that torched much of our region—the Witch Creek, Guejito and Rice Canyon blazes. SDG&E has claimed that the fires were acts of God, fueled by strong Santa Ana winds which caused the lines to ignite the fires.

Now the UT San Diego reports that the last major suit stemming from those fires may be settled. That suit was filed by owners of Rancho Guejito in Valley Center, where an estimated 23,000 oak trees burned, including thousands of endangered Englemann oaks.

SDG&E spokesperson Stephanie Donovan said the agreement was mediated and that details of the deal will remain confidential.  But a Rancho Guejito spokesperson told the UT that the deal was not yet signed.

If the settlement is finalized, it could end the possibility of a liability trial for SDG&E in which a court would decide who is legally responsible for the fires – and evidence  including expert witness testimony would have been available to the public.

Only four other lawsuits remain unsettled, and those are for relatively small amounts, the UT reports.  Donovan has said the utility expects to be able to settle the remaining cases or alternatively, seek damages-only trials that would not allow evidence of liability.  She told the UT, “That has been our approach to date and the judge has agreed with it.”