January 17, 2016 (Los Angeles)—The news sounds like the plot of a disaster thriller movie, but it’s real.  The worst environmental disaster since the BP oil spill, a methane gas leak that began Oct. 23 at a storage well in Aliso Canyon in northern Los Angeles has pumped over 85,000 metric tons of methane into the air.  According to the Environmental Defense Fund, each day of the leak spews as much climate pollutant into the air as 4.5 million to 9 million cars.

The leak at the site operated by Southern California Gas (a Sempra Energy company that also supplies San Diego’s gas) is endangering health and safety of residents as well as contaminating the environment and pumping a powerful climate pollutant into the atmosphere.   But it may soon get a lot worse.

A Los Angeles Times investigation reveals that efforts to plug the leak has been halted—after a backwash from those efforts caused a crater 80 feet long, 30 feet wide and 25 feet deep, leaving the wellhead itself exposed and now at risk of a catastrophic blowout. Access to control valves are cut off, documents revealed.  Should a massive explosion and fire occur with a 10-mile-long plume of methane over suburban neighobrhoods, the scenario would be horrifying.

“It’s a mega-leak,” one of the biggest ever recorded,” Timothy O’Conner, oil and gas director for the Environmental Defense Fund in California has stated. “The plume is about 1,000 feet high and several miles long.” Methane has 94 times more climate warming power than carbon dioxide, and EDF has warned that even a small methane leak “greatly accelerates the rate of climactic change.”

A single spark near the highly flammable methane plume could ignite a massive explosion and fire. The risk is so great that cell phones and watches are banned from the site—and a fix, best case scenario, is still weeks away.

Sempra Energy reportedly told the Times it “would not speculate” on current conditions at the site.  But physical sciences professor Gene Nelson of Cuesta College told the Times, “If the wellhead fails, the thing is just going to be full blast.”

Racing against time, the utility has proposed to capture about half of the still-leaking gas and burn it off.  But now the California Public Utilities Commission has called a halt to that plan for now, unless fire officials and regulatory officials can agree it’s safe.  Regulators, no doubt mindful of the deadly San Bruno natural gas explosion that leveled a city block, have noted that burning the gas could potentially cause a catastrophic explosion and fire.

The leak has slowed 60 percent since its inception nearly three months ago, So Cal Gas reports on a website it has set up with updates on the leak, but the amount of methane still spewing forth remains alarming for residents, environmentalists and public health officials.

10,000 residents of nearby Porter Ranch have evacuated and been forced to relocated.  But new test results consulted by Massachusetts-based consultants in recent days week found high levels of methane in Northridge, Granada Hills and Chatsworth.  In some cases, levels ranged from double to an astounding 67 times higher than normal, ECO Watch reported on January 15th.

Northridge, it’s worth noting, is where the devastating 6.7 earthquake was centered in 1994.  Should a major earthquake or brush fire occur in the vicinity of the worst methane leak in world history, the scale of the damage could be unthinkable.

The methane contamination has spread “all the way across” the San Fernando Valley, Gas Safety’s Bob Ackley, one of the consultants who took measurements, stated.

Residents in these communities, like the displaced Porter Ranch residents, have complained of  illness including vomiting, headaches, nose bleeds, eye irritation and breathing problems, but thus far So Cal Gas has not responded to residents’ pleas for relocation outside of Porter Ranch.  Los Angeles City Councilman Mitchell Englander has urged So Cal Gas to relocate his constituents in these areas.

Two schools have been shut down, many businesses and property values impacted, and now L.A. Supervisor Michael Antonovich has said he will ask Supervisors on Tuesday to halt new residential developments slated in much of the northern San Fernando Valley.

“It’s just like in hell,” Matt Pakucko, co-founder of the citizens group Save Porter Ranch, stated in an interview with Amy Goodman on the Democracy Now! Radio show.  “I don’t know what’s going to happen day to day. I don’t know if I can work. I don’t know if I can breathe. When I feel sick, am I getting a cold or am I like dying from this crap?”  He added that bills are stacking up, unpaid, due to missing work because of the crisis.

Governor Jerry Brown declared a state emergency on January 6 due to the Aliso Canyon/Porter Ranch  gas leak.  But many contend that’s too little, too late. Some cynically note that Brown’s sister, Kathleen Brown, is a director on Sempra Energy’s board.

California Senators Barbara Boxer and Dianne Feinstein have both urged the federal government to take action to stop the leak.

Michael Conley with Scientific Aviation conducted research flights over the leak in early November, calculating that about a million kilograms of methane were being released per day.  He told ECM, “During my first flights, the readings were so high I was concerned that my instruments were roken.  To put this in perspective, this is nearly one quarter of the methane emissions for the entire State of California, just from this one leak.”  He praised the State for having a pre-existing contract with his rapid respone team that enabled the specially outfitted planes to conduct prompt measurements with equipment not available to ground crews—planes that might have taken months to deploy if not for the contract in place with California’s Energy Department.

Besides methane, residents exposed to the methane leak face concerns about benzene, toluene and xylene that they could also be breathing in.  Back in November, benzene, a compound known to cause blood cancer, was found to be leaking as well, the Inquistr reported.  In addition, a substance added to the otherwise odorless gas is itself listed by the federal government has harmful to health, causing similar and potentially worse harm including neurological damage or even death at very high levels.

Residents have held rallies and meetings with officials from the Governor on down.  State health officials continue to insist that residents have not been exposed to toxic levels of pollutants, a seemingly implausible claim given the unprecedented high levels of methane and lack of measurements to assess other substances known to be dangerous that many experts say were likely also in the 85,000 metric tons of methane released across the region? 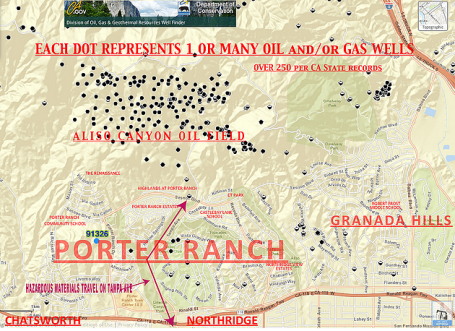 But that’s not all.  There are many more gas wells in the Porter Ranch region and across the San Fernando Valley.  Investigations of the leaking well near Porter Ranch revealed several other lesser leaks. Residents say they’ve smelled gas for years and wonder how long they’ve been exposed to potentially harmful substances, the Inquisitr reports. Residents are demanding that all wells be shut down permanently in their communities. (See @SavePorterRanch and #PorterRanchGasLeak).

The gas field where the Porter Ranch catastrophe is occurring is the largest deposit west of the Mississippi. But it’s a disaster that could play out in other communities across the U.S., since there are hundreds of oil and gas storage facilities across the U.S.  Moreover, the Environmental Defense Fund’s research has found that methane lakes are”very” common not only at big oil and gas facilities and oil fields, but “even in neighborhoods…”

Why are so many leaks occurring  “It’s a combination of oil and gas companies failing to monitor and maintain aging infrastructure and a lack of oversight of the oil and gas industry,” EDF concludes.  For too long, we have gone without federal and state standards that require sufficient leak and safety inspections for oil and gas facilities….When leaks do occur, they may go unnoticed indefinitely, since methane is colorless and odorless.”

So what’s the solution?  Now a national movement is growing calling for stronger standards to require “low-cost improvements, inspections and leak detection to prevent these types of problems in the future.”

The federal Environmental Protection Agency is finalizing the first-ever regulations of oil and gas methane emissions.  But the bad news is those rules, if adopted, won’t apply to facilities that already exist and are currently causing pollution and endangering the public. The rules would apply only to new facilities built in the future.

The EDF has launched a petition asking the White House to adopt stronger rules. You can sign the EDF petition here.

CREDO has started a separate petition asking Obama and the EPA for federal help to stop the worst methane leak in history.”  The CREDO petition is located here. So far, over 100,000 people have signed it.  CREDO concludes, “During the Gulf Oil Spill, President Obama said, ‘the tragedy unfolding on our coast is the most painful and powerful reminder yet that the time to embrace a clean energy future is now.’ That was true then, and it is true now as Aliso Canyon continues its apocalyptic eruption.”

This will continue to happen with aging plants, including California nuclear facilities unless our state government puts safety over the profits of these energy companies. The nuclear waste containers at San Onofre and Diablo Canyon are subject to cracks and leaks and the CPUC Energy Division ignored these facts and are giving Edison and Sempra millions to buy more of this inferior technology. The decision is in the Governor's hands. He's listening to the wrong people. Each one of these canisters contains more radiation than released from Chernobyl. A leak in these canisters would mean permanent evacuation.