Unmaned predator drones are now used for surveillance here in the U.S. and abroad 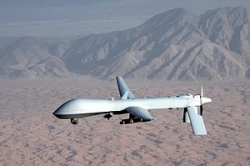 September 12, 2012 (Poway)--Every Thursday afternoon one can see a demonstration at the General Atomics plant in Poway, home of the Predator drone.  The demonstrators are from the San Diego Veterans For Peace and their supporters, with the goal of enlightening the public on the desperate need for oversight regarding drone technology.

The Predator drone is flying over 16 countries now, loosing weapons over Yemen, Somalia and Pakistan.  The kill statistics would be unacceptable in any conflict but are somehow overlooked because we are at war with terrorism.

Known civilians 500+, known children 65+, know terrorists 25.  The President has authorized the CIA to kill people with the Predator if they only suspect that they are involved in terrorist activity, clearly in violation of international law.  But still the Predator kills someone about every four days.

The Predator is flying over Waziristan, Pakistan 24 hours a day now terrorizing the people there because they can hear the motors, and don’t know if they might be killed at any moment.  Our nation in this case is the terrorist, and everyone is looking the other way.  I doubt that our founding fathers could have imagined that 250 years after the formation of out great nation, the President would have the power to kill people without authorization from Congress, or oversight of any kind.  This fact should deeply worry all Americans.

On our borders Homeland security is flying 20 of the Predator drones, and if local law enforcement wants them to surveil someone’s private property, Homeland Security is happy to help out.  Big pipe technology is advertised where high-resolution video or sensor data can be collected and shared with “select” law enforcement and government officials.  We are asking, who are these “select” officials and what are they doing with video taken over our private land?  Never mind a search warrant. I liken it to building a privacy fence around your property and having the local Sheriff hang a TV camera over the fence on a boom-truck, clearly illegal.  Also clearly illegal is the Predator’s surveillance of private property, only it’s taken in secret and controlled by no judiciary oversight.

This is what Veterans For Peace is demonstrating for:

Judicial oversight on the use of drones to surveil private property here in the US.

Oversight on the application and use of weaponized drones in other places.

We can all participate in making that happen by calling our Congressmen and demanding legislation that protects American liberties and the lives of so many innocents over seas.