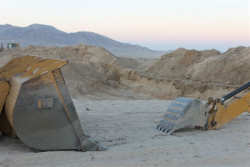 September 27, 2012 (Ocotillo)– The public is invited to a funeral procession mourning the loss of the Ocotillo Desert in Imperial County on Saturday, September 29. Organizers of the funeral procession note that the Bureau of  Land Management (BLM) was established to protect and preserve precious public lands. The BLM’s stated mission is to sustain the health of public lands for current and future generations by conserving natural, historical, cultural, and other resources on public lands.

But recently, the Obama administration began a nationwide initiative to open up the public’s land to developers for industrial-scale wind and solar projects. The policy is an expansion of a policy begun under the Bush-Cheney administration to open up public lands for development as energy corridors, allowing such projects as the Sunrise Powerlink.

“The BLM has the profound responsibility to be the stewards of more than 245 million acres of public land,” said Terry Weiner of the Desert Protective Council. “But in the past two years the BLM has effectively become the development arm of the U.S. Department of Interior by agreeing to sacrifice tens of thousands of acres of the public’s land for industrial energy development. Taxpayers are subsidizing large corporations with hundreds of millions of dollars in stimulus funds, production tax credits and low-cost loans.”

Although the BLM seems to have shifted from being a steward of the nation’s natural and cultural resources to a land office for energy developers, the BLM is participating in National Public Lands Day (NPLD)--the nation's largest, single-day volunteer event to celebrate the nation’s public lands heritage. This year’s NPLD is Saturday, September 29. 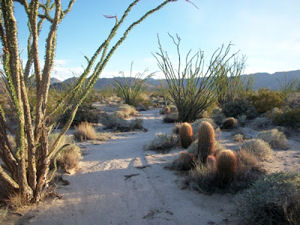 To bring attention to the irony of celebrating our public lands while BLM is handing over tens of thousands of acres for destruction by corporate developers, the public is invited to a “funeral procession” to mourn the loss of the Ocotillo Desert in Imperial County, a biologically and culturally sensitive gem that has been, until this year, protected and preserved for current and future generations.

Earlier this year, the BLM gave Pattern Energy a right-of-way on 10,400 acres of the Ocotillo Desert to develop a huge industrial-scale wind turbine project. The Ocotillo Wind Energy Project consists of 112 wind turbines, each standing 450 feet tall, with a blade sweep that is longer than a football field. The project is located in the Ocotillo Desert east of San Diego, in Imperial County and shares a five-mile border with Anza-Borrego State Park in San Diego County.