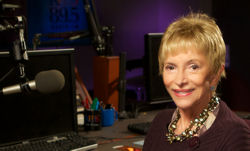 October 6, 2012 (San Diego) – Broadcast journalist Gloria Penner, a pioneer in local broadcasting and a leading voice at KPBS radio/TV station on the San Diego State University campus for more than half a century, died today of pancreatic cancer. She was 81.

Her death comes just days before the Women’s History Museum was slated to hold a special tribute to Penner at an October 13 “Broads in Broadcasting” celebration of women who broke through the barriers in the broadcast world.

“In the 1970s, I was a vigorous believer that women needed better representation in business and society, and I worked hard to make that happen. I doubt my demeanor resembled the TV-film stereotype of the obedient, dutiful babe in the background,” Penner said, according to a press release issued by the Women’s History Museum.

Only child of a strong, single mother, Penner was nurtured by her extended family of largely Russian-Jewish immigrants. The first in her family to attend college, she earned her master’s degree in English at Syracuse University.  Penner taught biology, English, and later radio production, where she developed a passion for broadcast journalism. She worked at stations in San Francisco and Hawaii before joining KPBS in 1969.  In July 2012, she aired her last broadcast, when illness forced her to step down.

She created and hosted the “Editor’s Roundtable” program in 1998, which featured local editors discussing issues of the day. East County Magazine editor Miriam Raftery was a guest several times on the show. “Gloria Penner was one of the most powerful, independent voices in our local journalism community,” Raftery said. “She was an inspiration to aspiring journalists—a gracious host who didn’t hesitate to ask hard-hitting questions.”

Penner interviewed many of San Diego’s most famous movers and shakers. She was known for her hard-hitting questions. For her efforts, she received many awards including seven Emmys, five Golden Mikes, two Gracies from the American Federation of Women in Radio and Television, numerous Society of Professional Journalists honors, and the San Diego Press Club’s Harold Keen Award for excellence in journalism. In 2003, the League of Women Voters created its annual Gloria Penner Award for Civic Service—with Penner as the first recipient.

In a 2009 interview with San Diego Magazine, Penner discussed how she honed her interviewing skills through trial and error.  “The first essential is to be prepared,” she said.  “The second essential:  ask no questions that can be answered with a yes or no. And have no fear. I’m never in awe of my guests, be they governors, mayors or city attorneys.”

KPBS General Manager Tom Karlo said today, “In Gloria Penner, KPBS has lost one of its greatest assets. Gloria was the heart and soul of our organization for years. She knew local politics better than the politicians themselves… It is a sad day at KPBS.” Penner was a role model and champion for women in broadcasting at a time when few women were in decision–making positions, he added.

Penner helped build the public broadcasting station into one of San Diego’s most respected news organizations.

In a story published today on the KPBS website, Pat Finn wrote that Penner “shared with us the insights and visions, the concerns and struggles—and always the humanity—of thousands of San Diegans.”  She had a passion for politics, but also believed it important to highlight the struggles of working people, women, minorities, and seniors as well as devoting attention to arts, music, literature and science.

A resident of La Jolla, Penner is survived by her husband, Bill Snyder, her sons, Steve and Brad Penner, and two grandchildren.  Private services for Penner were held today, the UT San Diego reported.  A public celebration of her life wil be held at a future date.