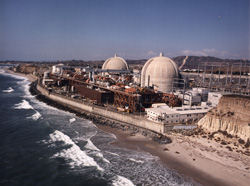 November 26, 2012 (Washington D.C.)-- The U.S. Nuclear Regulatory Commission, Atomic Safety and Licensing Board (NRC) has ordered that oral arguments be heard at 1:00 pm EST on Wednesday, December 5 from Citizens' Oversight (COPS) and Southern California Edison (SCE) regarding a license amendment request by SCE for the San Onofre Nuclear Generating Station.

“COPS requested that the event be held near San Onofre, but the NRC refused to hold it so that local residents can attend,” Ray Lutz, founder of COPS, a watchdog group based in San Diego’s East County, stated in a press release.  For the benefit of the public, the proceeding will be webcast at http://www.visualwebcaster.com/event.asp?id=91000.

Oral arguments will be heard in the Rockville Hearing Room, located on the third floor of Two White Flint North, 11555 Rockville Pike, Rockville, Maryland. The proceeding will be open to the public in Maryland; SCE attorneys and NRC staff will be attending in person.

“COPS representatives will be attending the meeting using a video-conferencing link with details to be determined, and although the NRC is not accommodating participation by the public, COPS will be setting up a viewing room nearby,” said Lutz, who will be available to answer questions before and after the event.

Lutz, Electrical Engineer and Founder of Citizens Oversight, prepared the petition to intervene based on a review of the proposed changes to the operating license of San Onofre. The proposed changes to the license do not directly reflect on the recent emergency shutdown on January 31, 2012, and furthermore, is not in response to the proposal by SCE to operate San Onofre Unit 2 at a lower power level despite massive and severe damage to the steam generator tubes due to excessive vibration.

Instead, the proposed license amendment makes a large number of changes throughout the technical specifications of the operating license. Most of these changes are quite similar in nature: they remove explicit requirements for inspections from the operating license and move these to a separate document which is no longer under the control of the NRC, but is under the control of the licensee, and therefore, it can be changed "at will" by SCE without any notice to the public, opportunity to intervene or request a hearing.

"The changes proposed further obfuscates the operating license and puts more trust in the operators of the plant instead of requiring regulatory agency and public review," said Lutz, author of the submission to the NRC. "After the egregious mistakes by Edison in the recent steam generator replacement project, we need to put a stop to further reliance on the good intentions of the operator and maintain our options to provide needed oversight to these dangerous plants."

COPS believes these changes unnecessarily obfuscate the specification and puts inappropriate trust in the licensee to keep the inspections at a safe level. They rely on the Surveillance Frequency Control Program (SFCP) which utilizes Probability Risk Assessment (PRA) calculations using a set of preconceived failure modes. Such analyses are subject to well understood knowledge-based failure mechanisms of "overconfidence" and limited failure scenarios known to underestimate the variety of failure mechanisms.

An argument will be made by SCE attorneys that the specifications of surveillance frequencies have not changed, since the values of maximum time period between inspections will initially be the same. But under the proposed changes, the licensee can vary these periods without any review by NRC or the public thereafter, and there are no "not-to-exceed" values specified in the specification. Furthermore, moving these values to another document obfuscates actions required by the licensee and may induce operator error as workers search for the correct value in multiple documents.