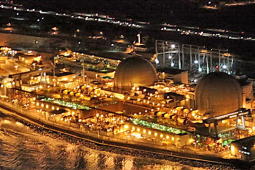 reprinted with the permission of San Diego Loves Green, where it appears @ http://www.sandiegolovesgreen.com/articles/san-onofre-in-limbo/

March 9, 2013 (San Diego)--It’s been more than a year since the San Onofre Nuclear Station was shuttered from a radioactive leak, allegedly caused by a design defect, detected in one of the station’s steam generator tubes.

The root causes are discussed in an official report released by the Nuclear Regulatory Commission on Friday, March 8, 2013.

However, Mitsubishi says this did not cause the failure. Despite allegations that Southern California Edison (co-owner of the plant with San Diego Gas & Electric) and Mitsubishi were aware of a design flaw before installation of the tubes, both companies hold firm that they were unaware of the problems that took San Onofre offline when the generators were installed. Mitsubishi maintains that design changes considered by officials would not have made a significant difference.

They say this is due to the unprecedented nature of the failure. That though tube vibration and wear have been cited as culprits, also at other plants, that industry wide, the exact type of vibrations observed at San Onofre had never before been seen. Eight more tubes in the same reactor unit later failed pressure tests—an unprecedented number—and thousands more tubes in both nuclear units showed signs of wear, determining that tube vibration caused by excessive dry and high velocity steam, with inadequate support structures, was to blame for the failure.

Advocates for closure of the plant are concerned that safety is not the first consideration. Since closure of the plant, San Onofre’s owners have lost more than $470 million. In the report, Mitsubishi said major changes to the design would require a license amendment that could cause a lengthy process.

Sen. Barbara Boxer (D-Calif.) and U.S. Rep. Ed Markey (D-Mass.) claim that Edison and Mitsubishi were aware of defects in the design of the equipment and failed to make modifications to avoid a license amendment process. Boxer has released a statement expressing “serious concerns” about actions taken by these companies, and Markey said they “cut safety corners to avoid a new NRC licensing process.”

Martha Sullivan, Organizer for Coalition to Decommission San Onofre, is in concert with Friends of the Earth, an environmental group prodding NRC to require a license amendment before the plant can go back online. The concern zeroes in on Edison’s experimental restart plan to operate at 70% power, a proposal that fails to meet the terms of their current operating license agreement that states technical specifications require that Edison demonstrate steam generator tube integrity over the full range of normal operating conditions, including at full (100%) power.

According to Friends of the Earth, “Edison has argued that they understand the intent of the regulation better than the regulator, and that full power does not mean full power for which they would operate under normal conditions as the NRC has stated, but whatever power they might arbitrarily choose to limit themselves to is then the definition of full power.” The environmental group insists the report shows that Edison and Mitsubishi “clearly knew about design problems,” but the two companies strongly disagree. Mitsubishi says the problems at San Onofre were impossible to predict given that the type of wear on the equipment had not been seen at any other nuclear power plant before.

Proponents that favor re-opening San Onofre cite that upgrades can be applied to the plant but opponents claim it’s a waste of money at this point. Cost savings and safety are key conflicting components, and the California Public Utilities Commission has reported that the plant will not reopen until it is determined safe to go back online.

Allie B. Kagamaster, a freelance journalist covering stories for SDLG since 2007, is based in Southern California, has a keen interest in environmental reporting and can be reached at americaneditor@yahoo.com.