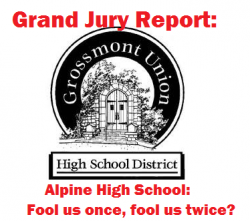 The Grand Jury found that “residents of the GUHSD and the greater Alpine area deserve clarity from the School Board regarding the proposed 12th high school."

The Grand Jury recommended that the GUHSD Governing Board "declare unconditionally, by December 31, 2013, if they are or are not going to build the 12th high school using funds from Propositions H and U.”

If the GUHSD opts to build the high school, it should pass a formal resolution in support, including a credible time line and construction start date, as well as funds placed in an escrow account to assure the work will be done, the Grand Jury proposed.  If the Grossmont District decides not to build the high school, it must then “cooperate wit the Alpine Union School District in support of the ongoing Alpine community effort to become a unified school district (K-12)."

Alpine residents have already launched a petition drive in support of separating from the GUHSD and unifying the AUHSD.  While the Grand Jury report stopped short of requiring bond funds be turned over to the AUHSD, the unification process requires support of both the County and State boards of education, which are required to assure that the unification agreement is fair, sources have informed ECM.

“We recommend that they cooperate,” Grand Jury Foreman Paul Christian told ECM when asked about the funding issue, but said the jurors chose not to address that question specifically in part due to difficulties in determining the appropriate funding amount.  But he emphasized, “We thought the recommendations that we made were very substantive.”

“We thank the Grand Jury for its recommendations and interest in serving the needs of all communities located within the Grossmont Union High School District,” Catherine Martin, spokesperson for the GUHSD, informed ECM.  “The District will give serious consideration to these recommendations and will develop a timely response following a thorough review.”

GUHSD Trustee Priscilla Schreiber has been outspoken in her support of a new high school for Alpine and has leveled sharp criticism of her board colleagues in the past.  However Schreiber indicated that the District has asked that board members refer media calls to the District office.

“The Grand Jury report underscores what I’ve said before: The Grossmont Union High School District specifically promised voters twice a high school in Alpine and it needs to deliver on that promise," Supervisor Dianne Jacob told ECM. "I endorsed both district bond measures in part because of that commitment.  It's time for the district to build the high school in Alpine!"

Doug Deane, chair of the 2011 GUHSD Boundary Committee and former Chair of the East County Chamber of Commerce Business Education Committee,  told ECM that he was a witness for the Grand Jury proceedings.

“The Grand Jury report on the 12th high school will hopefully break this deplorable stalemate,” he told ECM. “Ther is compelling evidence that the GUHSD has mismanaged its Proposition H and U bond funds and that 12th (Alpine) high school paid the price.”

Deane debunked arguments by the District which has claimed it could not afford to build the high school due to cost over-runs on other projects.  “The GUHSD 2011 Boundary Committee, which I chaired, was diligent in showing that the building of the 12th high school would virtually pay for itself and when it was fully operational, would add revenues to the District’s general fund,” he observed.

Deane, a Republican, charged, “the efforts by the District Trustees to stall its construction has been politically driven and highlights a lack of leadership by the GUHSD at the highest levels. In the end, our children will pay the price for the District’s shortcomings.”

The District’s Trustees are all Republicans.  Numerous parties told the Grand Jury that the GUHSD Trustees’ decision to halt plans for the Alpine High School was made in retaliation after the community balked at naming the high school after Ronald Reagan. The board had stacked a naming committee with Republican Party loyalists who had proposed violating the district’s own rule for naming schools after geographic features in order to honor the former President.

Bolstering his point,  ECM previously published a news story revealing that GUHSD Superintendent Ralf Swenson admitted in an e-mail to an attorney that he destroyed, unread, a report commissioned by the district to advise on whether it was violating the California Voting Rights Act, which requires adequate representation of ethnic and minority language populations within the district.

Bill Weaver, director of the Alpine Education Foundation, had this to say about the Grand Jury actions.

“The fact that the Grand Jury supports what Alpine is doing, I believe that helps give credibility to a point of negotiation for a fair settlement.” Weaver believes that the report also supports residents’ contention that the district has “not been transparent and honest with Alpine…They’re stringing us along.”  He noted that the AUHSD previously opted against unifying because the GUHSD advised that it intended to build a high school for Alpine high school students, before the District backed off those plans.

Weaver said the report sends a clear message to the GUHSD: “Put up or shut up.”

Sal Casamassima chairs the Alpine High School Citizens Committee but spoke to ECM as an individual, since the board has not met since the report was issued. He thanked the Grand Jury for its “watch dog” role and said the report should “reinforce our faith in our system of government…”

He asserted that the GUHSD “has treated Alpine with disdain and disrespect, coming to us only when needing our support and money to seek passage of their bonds” only to rescind promises in what he describes as “bait and switch” that amounts to “fraudulent inducement.  The Grand Jury report meticulously details these numerous instances of deception and false promises. As a result, the citizens of Alpine have been given no choice but to seek a divorce from GUHSD, unify our school district, and build our own high school.”

Casamassima said he does not trust that the District will act in good faith even after the Grand Jury report.  “Therefore Alpine will continue unabated with its unification effort,” he concluded. “We now have over 3,000 signatures for our unification petition and will soon file our request for unification with the San Diego County Board of Education.”

Beyond Alpine, he observed, “the Grand Jury report hints at how GUHSD mismanages and exploits the hundreds of millions of tax dollars from its two bond measures. Pork barrel projects abound and the district continues o burn through cash quicker than Paris  Hilton and Lindsay Lohan.”

The Grand Jury report notes that even after claiming it lacked funds to build the 12th high school, the District spent money to build a performing arts center at Helix High School instead of a less costly multipurpose facility and also built a larger-than-called-for swimming pool at Granite Hills as well as incurring expenses for other athletic facilities.

The report also faulted the district for issuing certificates of participation to fund a new high school in Alpine but instead, using the funds to build Steele Canyon High School in Jamul. The district underestimated costs on some projects as well.

Even after an enrollment threshold was met to build the Alpine High School following passage of both Propositions H and U, the board later claimed the threshold must be met again.  The Grand Jury also noted that Superintendent pulled back building design plans from the state without consulting the board, though the board later approved his action.

“All of the voters of East County, and not just Alpiners, need to take a close look at how badly their high school district has been run for decades,” Casamassima concluded.  “The report should be taken as a wake-up call by East County voters who should now consider following Alpine’s lead and take steps to dismantle this bloated and politically run bureaucracy.”

There is far more coloful language that applies too.