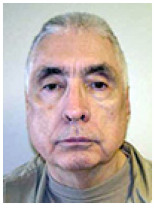 She noted that in recent years, other sexual predators placed in rural East County have violated the terms of their release and were sent back to a mental institution.

“Rather than dumping Badger in the backcountry, the state should house him next to Donovan State Prison, where several sexually violent predators have previously been located,” Jacob concluded.

A hearing on his proposed placement will be held at 9 a.m. on November 15 in San Diego Superior Court, Department 28 before Judge David Gill. The address is 220 West Broadway, 3rd Floor, San Diego, CA 92101.

Below are details on Badger, provided by District Attorney Bonnie Dumanis’ office.

70 year old Douglas Badger is diagnosed with schizoaffective disorder and Sexual Sadism and has a history of sexual assaults dating back to 1974. His victims were primarily 18 to 29 year-old male hitchhikers, although in one case he sexually assaulted a 16 year old female. In 1981, Mr. Badger was convicted of kidnapping and forced copulation with an accomplice and served 10 years in state prison.

Shortly after his release in 1991, he re-offended and was again convicted of forced copulation with an accomplice. He then spent another six years in state prison. In 1997, he was committed to the State hospital as a Sexually Violent Predator (SVP). On August 21, 2013, the court found that Mr. Badger could safely be released into the community for continued treatment and supervision.