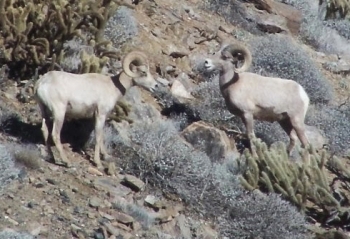 Note: Some readers have emailed about the "collars" that appear to be on these sheep. These are not radio tracking collars, just shadows from the horns. The photographer has sent additional images to clarify this point: 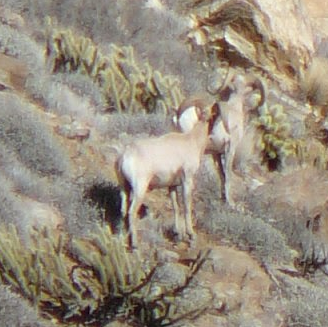 As for revealing locations, if we don't show that the EIRs are questionable by proving these animals are there, we wouldn't be doing our job as media. If the government fails to protect these animals, then blame should be directed at the government.

To clarify, a take permit is NOT a predation permit. It does not allow the developer to intentionally kill or shoot the animals. But it does mean there will be no penalty if the animals are accidentally killed as a result of the project or its construction.  So if the sheep die because habitat or water resources are destroyed, or one is hit by a construction truck for example, the developer gets off scott free.

I need someone to explain how a take permit can be issued on a critically endangered species, especially a non-predator.  In light of this, people need to be extra cautious when revealing locations/photos of animals.  It is very exciting to see them, but their death warrant may be being signed by publicizing it.  Again, how was Salazar allowed to do this?