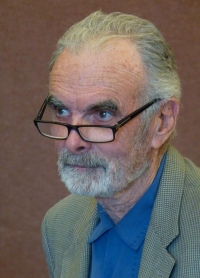 “Our forest is a delicate ecosystem being attacked by growth...This project will only add to the problems we are facing out here in the forest.” – Duncan McFetridge, founder, Cleveland National Forest Foundation (photo, left)

“We plan to rebuild existing lines in the forest to provide safe, reliable service and fire protection.” – Allen Trial, SDG&E

By Sharon A. Penny

February 6, 2014 (Alpine)--SDG&E submitted a plan to retrofit and update electric line facilities within the Cleveland National Forest into one Master Special Use Permit (MSUP). Currently, SDG&E has over 70 individual special use permits for these facilities. Many organizations and back country citizens are concerned about the need, cost, environmental impacts, and potential harm to the forest of the proposed plan of development.

A commission hearing of this type does not allow for public comments, as dictated by statute, but instead was to determine the outcome of a formal scoping memo based on interested parties who spoke.

Those with party status included SDG&E; the Utility Consumers’ Action Network (UCAN), which serves as a watchdog for utility rates; the Protect Our Communities (POC) Foundation; and via phone from San Francisco, Cleveland Lee. The parties other than SDG&E have filed formal protests against the plan. The Cleveland National Forest Foundation also requested party status at the meeting.

Administrative Law Judge Jean Vieth emphasized that in spite of the formality of the prehearing, public comments are not only welcome, but encouraged. She said it was important for concerned citizens to participate by providing letters and contributing to the environmental scoping process.

“I cannot stress this enough,” she said. “If you are interested in environmental impacts, please participate in the public scoping process and comment on the Environmental Impact Report (EIR). These are the avenues for the public to have a meaningful impact.”

“Our purpose is to reconstruct the lines for fire hardening purposes to increase fire safety and service reliability,” he said in an e-mail response to ECM. “The proposed projects will allow SDG&E to continue to provide safe, reliable and cost-effective operation and maintenance of electric facilities within CNF.”

At the hearing he elaborated, “We plan to rebuild existing lines in the forest to provide safe, reliable service and fire protection.”

According to the revised application on file, the U.S. Forest Service circulated for public comment an Environmental Assessment in 2009. In response to public comments received, the Forest Service determined that additional fire risk reduction measures within the forest, including fire hardening, and additional undergrounding should be evaluated as part of the MSUP review process. An environmental impact statement was required. SDG&E has been working with the USFS since that time to expand the scope of the proposed MSUP, to include specific fire risk reduction measures. SDG&E has been analyzing the potential environmental effects of the proposed fire hardening activities and refining the scope where possible to avoid and minimize potential impacts.

Donna Tisdale, chair of the Boulevard Planning Group and president of Backcountry Against Dumps , who did not speak at the meeting, said SDG&E is not explaining the full scope of the plan.

“The plan appears to be an undisclosed stealth increase in carrying capacity that may directly or indirectly support numerous commercial solar projects that are already proposed along or near the route in Boulevard, Pine Valley, Descanso, Potrero, Julian, Ramona, and perhaps elsewhere that we not yet aware of,” she said. “Solar generation projects represent potential new fire ignition sources that cannot be de-energized during Red Flag wind events or other emergencies.”

David Peffer, representing Protect our Communities (POC) Foundation, said his organization is concerned about costs and the potential of increased electrical capacity, which could have a negative impact to the community.

“For the record, POC objects the approval of GEO 131-D due to the extent that there has been no previous consideration of cost and need.”

UCAN’s executive director, Don Kelly, said his main concern was the cost to the ratepayers, which is not addressed.

Cleveland National Forest Foundation founder Duncan McFetridge stressed his organization’s concern about the fragility of the forest and the impacts that increased capacity and construction of the project would have.

“Our forest is a delicate ecosystem being attacked by growth,” he said. “The creatures who live in our forest do not need increased electricity, and this proposal has the not been fully vetted.”

McFetridge and Tisdale both discussed water issues after the meeting. Previous energy substations required more water than originally planned for.

Tisdale asked, “How much water will be needed? Where will it be source; and what impacts will there be to adjacent well owners and rural resources that rely on groundwater?”

McFetridge was concerned by the current drought.

“California’s dire drought situation was not discussed today,” he said. “This is the most pressing issue we have here. This proposal will only add to the problems we are currently facing out here in the forest.”

Schedule and Next Steps:

According to Lisa Orsaba of the California Public Utilities Commission, which is the lead joint agency along with the U.S. Forest Service, the tentative schedule is as follows:

The plan is expected to take five years to complete. Orsaba also stressed that public comments on the EIR are crucial for the Commission to make recommendations.

According to Judge Vieth, the next step will be a scoping memo from the assigned PUC commissioner, Michael Peevey, who was not in attendance at the Feb. 5 prehearing. He will be issuing his report based on the formal transcript of the prehearing.

Implications based on the California Environmental Quality Act (CEQA) will be analyzed and are very important for next steps. The judge said that could affect the schedule.

Once the draft EIR is released, there may or may not be a need for another prehearing. That could also affect the schedule.

To view the application on SDG&E’s website, visit: http://www.sdge.com/regulatory-filing/3792/application-sdge-permit-construct-cleveland-national-forest-power-line .

To view a full-screen map of all major energy projects proposed in San Diego County (smaller version shown below) to learn what's planned in your community, click here. 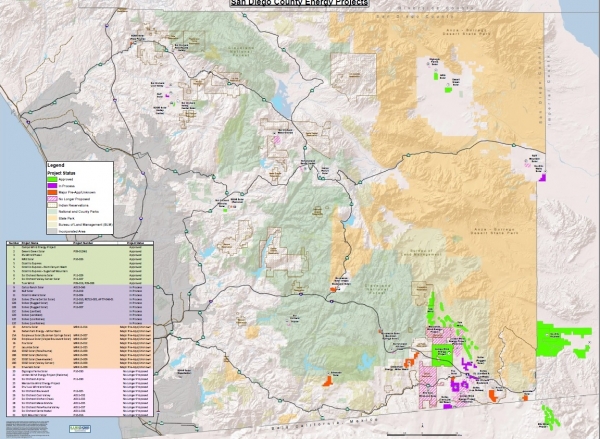 Donna's suspicions are well warranted. Last night's planning group meeting at the Boulevard Fire Station made painfully clear both the scale of the proposed SOITEC solar project and the county's shockingly inadequate EIR report. What do they want? To bulldoze, trench, pave, wire and cover 1700 acres of rugged, beautiful, open land with 8000 30ft. solar panels. Needless to say, if something like this were to succeed--when combined with the already approved Tule wind farm, a mechanical forest of nearly 500ft. gleaming space-age white wind turbines--it's difficult to imagine what portion of this beautiful town and landscape will be left. Boulevard's fate, as envisioned by the conspicuous mediocrities now serving as our county supervisors, seems destined to be an East County "renewable" energy factory. Once stunning mountain vistas that reached to the sea are already crisscrossed with numerous, "L.A. style" high voltage lines suspended on hideous steel towers. Given the county's plans, expect to see more.