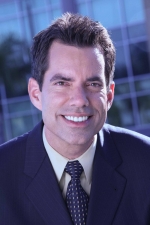 Democratic candidate, 4th Supervisorial District
Stephen Whitburn ran for City Council in 2008, receiving 45% of the vote. Now he’s set his sights on winning Ron Roberts’ seat on the County Board of Supervisors.
“My background is in journalism,” the award-winning reporter says. “I covered government for many years and I know how to ask the tough questions and get to the heart of the matter, and tell people what’s going on. Our Republican Supervisors have done a poor job of telling people what’s going on.”

Whitburn believes strongly in “economic justice and a strong middle class, and in social justice, where everybody is treated well.”
He faults Roberts for “not being a strong enough advocate for social services that the County is responsible for providing for children, seniors, the poor, the infirm, and veterans who have served our country.” The County has failed to take advantage of state and federal funds available for public healthcare and for helping refugees arriving here from other countries, he contends. “Our County Board of Supervisors has a key responsibility in the area of public health and it has repeatedly dropped the ball in seeking available state and federal money that we as taxpayers have already paid for,” Whitburn observes.
Whitburn is also critical of Roberts record on environmental protection and fire prevention. “Ron Roberts has not been a strong enough advocate for preserving our environment and protecting our backcountry,” he says. “The County of San Diego needs to take more responsibility for fire protection in the backcountry,” he notes, adding that fires that start in East County have threatened urban areas including some portions of the Fourth District. “Currently fire protection is left to individual districts which do a valiant job,” he says, but notes that more help is needed to protect area residents. “Our County invests very little in fire protection compared to what Riverside and Los Angeles County invest in fire protection. It is a core County responsibility and our County Board of Supervisors has failed residents repeatedly in that regard.”
Whitburn would take discretionary “slush funds” that each Supervisor currently controls and invest that $5 million in “protecting the safety of County residents.” He also pledges fiscal accountability and transparency.
He has been an outspoken opponent of Sunrise Powerlink and if elected, could provide the slim majority vote needed for Supervisors to cast a vote and officially go on record against the controversial high-voltage line.
Whitburn praises his Democratic opponents as “very good people” but says he believes he can mount the strongest campaign because of his experience raising funds in his Council race and advocating for people in the district already. He has been endorsed by State Senator Christine Kehoe, Councilmembers Donna Frye and Marti Emerald, Assemblyman Marty Block, Ruich Grosch, president of San Diego Community College District Board of Trustees, and the San Diego County Young Democrats.
If elected, he would also be the first openly gay Supervisor.
For more information on his campaign, visit www.stephenwhitburn.com.