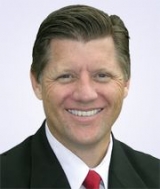 April 15, 2010 (San Diego’s East County) – Santee Vice Mayor Brian Jones is vying against two other candidates (El Cajon Councilman Bill Wells and educator/political communications specialist Christine Rubin) in the Republican primary. He hopes to fill the vacancy left by Joel Anderson, who is running for State Senate. If successful in June, Jones will face off against Democrat Mark Hanson in November.

He views his seven years of experience on the Santee Council as his most important qualification. “Santee is one of the most fiscally responsible cities in California, if not the entire state,” he says. “Limiting government, keeping taxes low and personal responsibility are three cornerstones of what government should be about. In Sacramento, they’ve moved away from those,” he said, adding that he is the only candidate with a proven track record of applying those principals. “We balanced our budget without raising taxes,” he said, noting that El Cajon raised its sales tax, with voter approval.

But Santee’s budget recently has been severely impacted, he said. “It was 100% because Sacramento couldn’t balance its budget.” Faced with deciding whether to cut a deputy sheriff, Santee’s council found itself saddled with a state-mandate to irrigate vegetation at Forrester Creek – at an increase of $150,000 a year, said Jones, who objected to the unfunded mandate, which the City later renegotiated with the state.

If elected, his top legislative priority will be to create private sector jobs by “getting government out of the way of the free enterprise market—lower taxes on individuals and corporations, and two, reducing the regulatory burden that the state government is placing on businesses that is chasing them out of the state.” As an example, he cites a state mandate to reduce stormwater runoff that local cities fought and recently won. “The state will either have to pay $18 million a year, or reverse the mandates,” he said.

Jones calls for more reservoirs to ease our region’s water crisis. He also believes California should invoke Constitutional “state rights against the judge who turned off the pumps” , a court decision which restricted water availability for southern California.

Jones has been a Santee resident since 1978. He ran for Congress in 2008 but lost to  Duncan D. Hunter in the primary. He holds a bachelor’s degree in business administration from San Diego State University. He worked for an auto retailer, where he was promoted to sales manager before entering the ministry.

He is a licensed minister and past staff member of Sonrise Community Church in Santee, as well as sales associate for Diversified Realty Advisors and Church Brokers, details that are curiously omitted on his official candidate bio. According to http://www.churchbrokers.net/theteam/brianjones.html, he led staffing efforts for the church’s pre-school ministry and has networked with senior pastors across the country. The site notes his position with the Santee Council enables him to “help guide churches” through the process of “gaining local government support for church building or relocation.” Jones is married with three children who attend Christian school.

Asked about funding for public education in a region where school boards are feeling severe budget pinches, Jones said that 80% of local school budgets are mandated by California. “We need to get the money out of the state bureaucracy and let school boards locally operate.” He also called for reduction in the influence of labor unions.

Asked about fire protection, Jones said he supports some, though not all, consolidation efforts. Santee’s Fire Department recently opted not to join three other East County cities that consolidated their fire departments. “At the state level if there is something I can do to support local agencies that want to consolidate then I will do that,” he said. Noting that training and communications have improved since the 2007 wildfires, Jones said he believes many problems have been resolved. Asked whether he feels the region has adequate aerial firefighting support, he said he is “not a fire expert; it seems like it’s been increased and might be sufficient but I certainly don’t want to say for sure. If agencies made a case for needing more aerial support, I would certainly consider that and find a way to fund it.”

On energy policy, Jones supports building more power plants, including nuclear. “I also support the drill here, drill now concept,” he said, adding he would approve of offshore drilling in California under certain circumstances. He also supports increasing solar power for residences. But he adds, “I’m not sold on the whole wind power concept. It doesn’t seem like a source of green power to me when you’re driving through Coachella Valley and see thousands of wind turbines.”

Asked his views on Sunrise Powerlink, he replied, “If SDG&E needs it, they need it. But I don’t think they’ve necessarily proven it. There are other solutions we should consider first.”

He views the healthcare reform issue as “a case of snake oil salesmanship. We do not have a healthcare crisis in California or America,” he maintains. “We have the best healthcare system in the world. If we have any problem, it’s a cost problem that will not be solved by government, but by overhauling the insurance regulation system to make it easier for insurance companies to sell products that people want to buy, reducing regulation on insurance companies which are so overregulated in California…We need to get back to a more free enterprise system and cost will naturally come down.”

Jones opposes gay marriage and abortion, though concedes that decisions involving a mother’s life, rape or incest are difficult. “I’d like to think I could encourage a woman in that case to go through with pregnancy, but let’s firsts reduce the number of abortions we have now that are abortions of choice or convenience.”

Jones is endorsed by Santee Mayor Randy Voepel and the entire Santee Council, as well as Councilman McClellan in El Cajon (who Wells also lists as an endorser), La Mesa Councilmember Mark Arapostathos, and local business owners. He says he is proud of his “grassroots campaign of people who know me and trust me because of the results we’ve accomplished in Santee.”

For more information on Jones’ candidacy, visit his website at http://www.electbrianjones.com.

For information on his opponent, see: