How would you as a  freshman legislator attempt to alleviate and help address the budget crisis? http://vimeo.com/12276900. 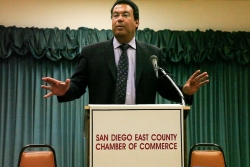 June 3, 2010 (El Cajon ) – Seven candidates for state legislative offices fielded questions and presented their views at a candidate forum sponsored by the San Diego East County Chamber of Commerce Tuesday and moderated by former TV news anchor Vic Salazar at the Elks Lodge in El Cajon. Candidates clashed on views over how to turn the economy around and bring jobs to East County, with visions that ranged from slashing taxes to specific plans for actively bringing green manufacturing jobs to our region.

Vying for the 77th Assembly district seat, Republicans Bill Wells, Brian Jones and Christine Rubin participated, along with Democrat Mark Hanson. In the 36th State Senate district, the panel included Democrat Paul Clay as well as Republicans Jeff Stone and Rev. Greg Stephens.  Assemblyman Joel Anderson, who is also running for the State Senate seat, did not attend. His chief of staff asked but was denied permission to participate on Anderson’s behalf. Because the Legislature was in session, he said, Anderson could not participate “unless he took a taxpayer-funded trip down here.” 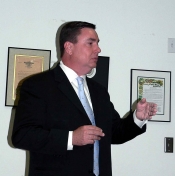 One audience member asked afterward, “Why couldn’t he fly down at his campaign’s expense?” Stone criticized Anderson for missing 11 of 12 candidate forums and debates . Anderson also drew criticism from opponents for criticizing government spending yet spending the most on mailings to constituents of any Assembly member—including multiple mailings shortly before the June 8th election. 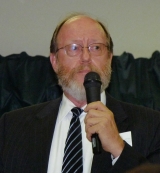 Hanson, an educator and nonprofit leader who also heads up United Green Enterprises and Leadership Management International, San Diego, said he is running to revitalize our economy. “I have the experience, connections, and expertise,” said Hanson, who has also served on a Governor’s economic council. Hanson said he has been traveling the nation and has already met with 250 companies and identified 22 different sectors in which he will bring green manufacturing and other green jobs to San Diego, particularly East County. United Green, an entity headed by Heartland, is also sponsoring a green jobs conference at SDSU this fall with Governor Schwarzenegger as keynote speaker. 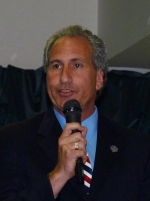 Stone, a pharmacist and Riverside County Supervisor, says the answer is to reduce taxes and regulations. “We need an economic development plan to recruit and keep people here,” he said. He cited his experience bringing a shopping mall to his region and cutting taxes during his 17 years in public service as key qualifications for the State Senate. He also proposed a "legislative accountability act" that would require that legislators pass a budget ontime or forfeit their salaries.

Clay opposed the latter proposal, saying it would pose a hardship and result in only wealthy people running for the Legislature. 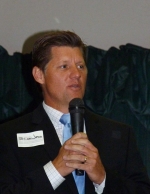 Jones, Santee’s Vice Mayor, claimed credit for an “economic renaissance” of Santee, such as a new sports facility to be run by a private corporation. He wants to fuel growth through lower taxes and cutting environmental regulations. Wells, Vice Mayor of El Cajon, and Rubin, a former Schwarzenegger appointee as deputy director of California’s State and Consumer Affairs Agency, also want to reduce state spending.

“We need to make it easier to do business and be entrepreneurial,” said Wells, citing a drill manufacturer as an example. He believes California doesn't have a revenue problem, but rather a spending problem.

Rubin joined with all Republicans present in calling for repeal of AB 32, claiming it 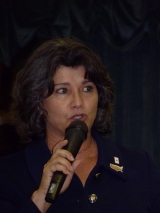 will drive companies out of business or out of state. “Government needs to give us just enough to keep us safe and then get out of our way,” she said.

Wells called AB 32 a “job killer” and said he doesn’t think it’s necessary “even if global warming is a reality, which I doubt.”

But Hanson, the only candidate present with experience actually creating green jobs (which account for one in three new jobs in California) spoke forcefully on the need to preserve AB 32. “It’s the only way to generate good jobs for the future,” he said. He noted that India and China surpassed the U.S. in manufacturing of solar and said that relying on deep-water offshore oil drilling to supply future energy needs is not a viable long-term strategy. He said AB 32 provides incentives for green manufacturers to locate or expand in Califiornia and supports cap and trade to provide jobs, apart from the measure’s benefits for air quality or global warming concerns.

While Republicans pledged no new taxes, Hanson would support a 10% tax on oil extraction, which would generate an estimated $1.5 billion—enough to prevent the Governor’s proposal to eliminate the Cal-Works program including childcare and job training for low income people. California is currently the only oil producing state that does not have such a tax, he noted. 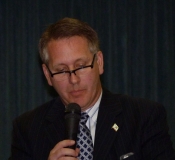 Stephens, a desert storm veteran and first responder during the Oklahoma bombings, said he’s running because as a pastor “I’ve watched the lives of members being destroyed not by disasters like Katrina, but by decisions of career politicians.” He wants to privatize state agencies such as the Department of Motor Vehicles and also proposed a bill to force registered sex offenders to have IDs on their driver’s licenses. 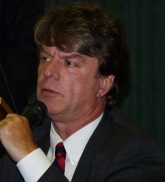 Clay, a teacher who has taught in high school and continuation schools, said he’s running because of problems in our education system. “Our children are in trouble and they need our help,” he said. He wants to reduce crime and violence in public schools, reduce class size, make preschool accessible and cut waste in administrative spending. “As a teacher, I’ve had up to 56 students in a classroom. Piling on isn’t working.” He also took issue with Republicans for demonizing teacher’s unions. “In my district, we’ve tried hard to accommodate our district. Union members are sacrificing up to eight days of pay.”

Stone, who advocates local control of education dollars, said he wants to “take the state education code and burn it.” Stephens, whose children attend charter schools, advocates more options for parents to send children to charter instead of public schools. Jones spoke of “wrestling control from the teacher’s unions, a theme echoed by Rubin. Wells, who moved his child to a private school, said public schools should be able to improve test scores with less money.

Jones said he does not believe education funding is a problem, despite sharp cuts in state funds for local school districts, and called for more local control over how education dollars are spent.

Hanson, who was twice named teacher of the year and also served as administrator of the Grossmont Union High School District in an era when the district scored among the highest in California, expressed concern that California’s public schools now rank 49th out of 50 in the nation. He called for improvements in K-12 and was the only candidate to call for lowering tuition rates at state colleges and universities. “UC tuitions have risen from $300 to over $8,000,” he said, adding that making higher education more affordable is a key for creating an educated workforce and good jobs for graduates. He also supports more training programs for non college graduates, such as a project retrofitting homes he has arranged with Chase Bank for inner city San Diego youths. He also revealed that his consulting company has been awarded a contract to send up to several hundred local workers to the Gulf coast to assist in the oil spill cleanup.

All candidates expressed reservations or outright opposition to Sunrise Powerlink.

Stone said he opposes Powerlink, which he called a “fire hazard.” He added, “Joel Anderson took all that money from SDG&E,” a reference to the FPPC finding that Anderson’s campaign violated campaign finance laws by accepting donations over the maximum amount from several donors including SDG&E. “Where do you think his loyalties lie?”

Stephens said he is “adamantly against Powerlink” and said it was approved because of “special interests.” Clay proposed an innovative alternative: Sterling solar-powered motors installed locally instead of in Imperial Valley to eliminate need for Powerlink. Hanson, a fire survivor who lives in Lakeside, said he opposes the current route and believes if Powerlink is constructed at all, it should go along the border parallel to the existing Southwest Powerlink lines.

Jones said he opposes the route as proposed and wants to see state law changed to allow homeowners and business owners to sell back solar power to the grid. Rubin expressed concern that by relying on power from outside our region, “we are losing our ability for local power generation.” 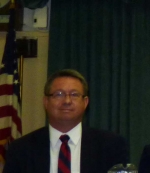 Wells did not take a specific stand on Powerlink but criticized “state laws that force utilities to have to go out of state for renewable energy that we really don’t need,” which he called “environmental extremism.”

On same-sex marriage, Republicans all said that the believe marriage should be restricted to a man and a woman, though Stephens indicated he would support the will of the people in a ballot initiative. Clay, by contrast, said he believes people should be “free to marry whom they choose,” adding that he has been happily married to his wife for 22 years. Hanson said he believes in “human rights for all people, but I also respect the will of the voters.”

Immigration was a hot topic. Asked about Arizona’s tough immigration law, Rubin said she supports Arizona’s right to enact the measure and further said if California cities threaten a boycott, Arizona should counter by threatening to “turn off the lights.”

Stone would put National Guardsmen at the border, an idea that Stephens also supports along with setting up MASH-unit type field hospitals. Wells would pressure the federal government to finish building the border wall.

Clay had a very different approach, noting the high cost of other measures. “The problem is simple. We hire them,” he said of the illegal immigrants. “Tighter enforcement of existing laws is all we need,” he added, noting that it can take up to six months currently for an employer to discover that an employee has a fake social security number. “If we close down jobs, there won’t be an issue.”

Stone took aim at negative campaigning done by an opponent. “I assure you, I don’t sell narcotics out of the back of my pharmacy or shower my relatives with cars,” he quipped.

Clay noted, “You won’t see any of those mailings from my camp,” then added, “My opponents are moving to extremes, but I am reaching out to all.”

Rubin, whose home suffered damage in a wildfire, said she is the only one who attended a recent Cal-Fire briefing for candidates. Hanson, who lost his home in the Cedar Fire and helped other fire victims rebuild their lives, also pledged support for strong fire protection for our region.

Several candidates expressed support for making California’s legislature part-time, a proposal that was opposed by Clay and Wells.

I couldn't be there for the event, and this is a great recap of where the candidates stand. For me, the Powerlink is a significant voting issue, and any candidate who does not take a stand AGAINST it will definitely not have my confidence or trust.