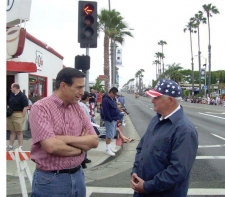 September 23, 2010 (San Diego) – Republican Congressman Darrell Issa is refusing to debate his Democratic opponent, Howard Katz. According to Katz, Issa personally agreed to a debate when the two candidates met at a Fourth of July Parade in Oceanside on July 3rd. Katz s provided a photo of himself speaking with Issa at the event and said Issa asked him to pick a date when Issa was available.

Now Issa's office has confirmed that Issa will not debate, raising questions over the scandal-plagued Congressman's motivations.

In recent weeks, both Katz and Libertarian Party candidate Mike Paster attempted to set a date for the debate, without success despite multiple calls and visits to Issa’s offices. Yesterday, the North County Times reported that Issa spokesman Kurt Bardella said Issa now denies agreeing to a debate.

“The spokesman is telling a fib,” said Katz, a businessman and former senior management executive for IBM and Oracle, said flatly. He accuses Issa of getting cold feet.

Bardella told the North County Times that Issa won’t debate his 49th Congressional district opponents because he is focused on his watchdog role over the federal government and the Obama administration.

Issa is the senior ranking member on the House Committee on Oversight and Government Reform. The current chair of that committee, Congressman Edolphus Town, recently spoke in San Diego, where he warned that Issa intends to “subpoena the rats and cockroaches” in an effort to impeach President Obama if Republicans regain control of Congress in the fall elections, in which case Issa would become the Committee’s Chair.

Issa may also be wary of fielding questions in a public forum about recent questions that have arisen about his own ethics. According to a CityBeat article published July 7 – just days after Katz claims Issa agreed to a debate: “A CityBeat analysis of Issa’s 2010 financial disclosure statement and annual report of his financial holdings revealed several conflicts of interest and a real-estate deal that benefited Issa to the tune of $3 million.” CityBeat suggested that a team of investigators that Issa has pledged to unleash to investigate government wrongdoing allegations “may want to start with Issa himself.”

East County Magazine has previously profiled Katz, who discussed his views on jobs, the economy, education, wildfire protection and other major issues in depth. View our article here. Our requests for an interview with Rep. Issa have received no response.  The 49th district includes both eastern/inland and coastal areas in northern San Diego County.

Issa, the richest man in Congress, has a net worth of $251 million. Katz faces a steep uphill battle for name recognition with voters, a task made more difficult now that Issa has refused to participate in a debate. Katz has set up a website at http://www.hkatzforcongress.com/.