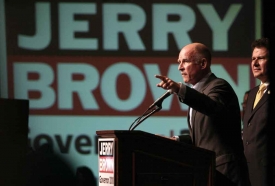 Students and community members equipped with signs and T-shirts gathered as early as 10 a.m. to ensure that they gained admission into Montezuma Hall for the rally sponsored by the Brown campaign and the San Diego County Democratic Party. The line stretched from Aztec Center to the west side of campus near Campanile Walkway, far exceeding the venue’s capacity. 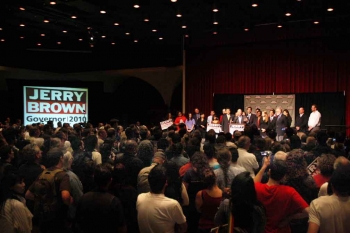 When the doors opened at 11:30 a.m. the crowd poured into the venue rooting, “Jerry—Jerry—Jerry,” while fist pumping to the electronic dance music spun by local deejay Katrina Larsen. Even the elected officials standing onstage clapped their hands and bobbed their heads to the music as the room echoed with thudding bass and excited chatter.

“Attorney General Brown has devoted his life to the public good,” SDSU President Stephen L. Weber said, welcoming the audience. “We hope that he will remember how important higher education is to fuel the economy of California.”

“Fund it!” a crowd member chanted in response with enthusiasm.

“For eight years prior to getting into the Assembly, I was president of San Diego’s Community College Board and Jerry Brown started as a Community College Trustee,” Assemblyman Marty Bock said, pumping up the crowd. “You know how important colleges and universities are for the future of our state, and that future will get a boost if Jerry Brown is elected.”

Upon taking the stage at around 12:30 p.m., Brown was greeted with thundering claps and roaring chants. The crowd was a sea of supportive signs, flashing cameras and hands curled into peace signs.

Getting right to the heart of the matter Brown said, “I really want to make sure that your educational opportunity is protected. I don’t want to see any qualified person kept out of a university.”

Brown emphasized that higher education is not only beneficial to students, but it is ultimately a benefit to society. “It is a public good, and that’s why to starve it is crazy,” Brown said. “We should invest more, not less.” 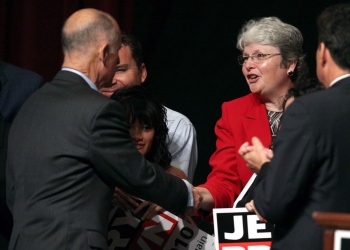 The crowd let out shouts of support when the attorney general brought up the deplorable rise in tuition in the past decades. He said he paid $125 per semester for his college tuition, and his mother’s tuition was a mere $22 only 28 years earlier.

“We’ve got to get the word out that you are the future,” Brown said. “You’re going to contribute back so many more times than the taxpayers support you in getting all this wealth, because the wealth is in your mind.”

Brown served as California’s governor from 1975 to 1983 and expressed his displeasure with some of the state’s decisions after his terms. The crowd booed in unison at the mention of the state building 22 prisons and only one college after Brown left office.

“We want to invest in building, not just in correcting or incarcerating,” Brown said.

He went on to criticize Whitman’s excessive funding for her campaign, which he has mentioned often. A Republican candidate and former chief executive of Ebay, Whitman’s top priorities consist of creating jobs, cutting spending and fixing education.

“She’s put $170 million and I’ve put a fraction of that,” Brown said. “If she’s wasting her money in the campaign, what might she do with our money if she ever got elected?”

Brown says that sometimes not having enough can help one make better decisions because it calls for careful thinking and attention. Making decisions with caution is what has helped Brown develop the three attributes he emphasized the most: know-how, values and vision. He said he has the knowledge of an insider, but the mind of an outsider, referring to the phrase, “You are going to be in the world, but you’re not going to be of the world.”

“That creates a certain distance because you want to see the world, but you don’t want to be caught up in some of the bad things.” Brown said. “When I talk about politics, I feel I’m in it, but I’m not exactly of it.”

“When you give them an elimination of that, you enrich the people who are already at the top and they’ve got everything,” Brown said. “That’s the money that we’ve been counting on to be able to pay back the schools that we’ve been cutting back for the last few years. Don’t take it away.”

If Whitman’s plan is approved, Brown says it’s going to take a substantial amount from schools and education as a whole in California.

“My jobs plan is not to create this gigantic tax break,” Brown said. “It’s to invest in green jobs; it’s to create the future.”

Brown plans to follow the example of former president, Franklin Roosevelt, by creating jobs for the community that could ultimately pave the way to new developments and areas of study.

In order to solve California’s most difficult problems, Brown said both parties must pull together to form solutions as he referred to one of Gandhi’s greatest lessons: There’s enough for our need, there’s just not enough for our greed.

“I really feel that the breakdown in the state government has now gone on long enough that people are really ready for a breakthrough,” Brown said. 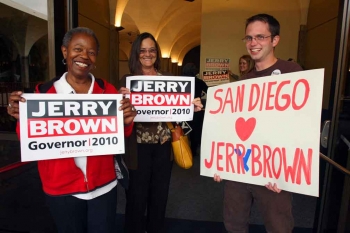 According to a poll by the Public Institute of California, Brown currently holds the support of 44% of voters while 36% of voters are likely to vote for Whitman, and 16% of voters remain undecided.

Many eager students and community members were turned away from the rally after Montezuma Hall reached capacity. SDSU students, Kevin Elliot and Bethany Scribner heard about the rally through word of mouth as well as messages from Associated Students and got in line for the event by 11 a.m.

Scribner, a junior majoring in advertising, attended the rally to learn more about Brown’s views and goals. “I just really don’t support Meg Whitman,” she said.

“Jerry seems like he’s a little cooler. He’s a bit more real. He doesn’t smile all the time, but Meg Whitman smiles all the time,” speech therapy major, Elliot said. “I don’t know anything about politics so that’s why I’m here.”

“I feel like he has his campaign rolling in a positive direction and he knows the fixes California needs. I would like to see costs of higher education cut, and to have our tuitions more directly impact the students,” Kristian Berg, a communications senior, said. “I also feel like he wasn’t clear about what he will do differently than his last term as governor, and what he learned from his previous term.”

With the election less than two weeks away, Brown will continue to rally supporters up until the big vote on November 2.

Tanya Huang is a journalism major at San Diego State University and an intern for East County Magazine.

Jerry we don't have the money to send everyone to college. How about not letting the illegal aliens get cheaper tuition than American citizens coming from other states. Time to clean house. Anyone that could not vote for McCain because he was just to dang old would have to be crazy to vote for Jerry. He is older than the crypt keeper and doesn't look much better.
I for one still remember Governor moonbeam and I do not want him back