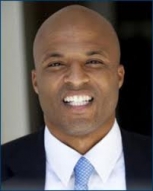 “Put some swing in our vote,” Dunn told members of the San Diego Black Chamber of Commerce during an October 20th meeting at Nico’s Steak & Chop House in Eastlake. Noting how voting patterns have changed over the years, Dunn urged the group to “know the power of your neighborhood” and encouraged networking in the community.

Dunn has emphasized educating the public on programs to assist small businesses, providing matching grants for targeted areas for storefront renovation projects, especially healthcare facilities. He assured that he and his staff would be advocates for small businesses.

She received the Profiles in Courage award for "conscientious and courageous acts of the public servants and to encourage elected officials to choose principles over partisanship." She also cut her department’s budget by 25% in the past two years. She holds a law degree from the University of Virginia and practiced law with a major Los Angeles firm, also working as a sole practitioner.

Bowen is endorsed by all major newspapers in California including the San Diego Union-Tribune, the Los Angeles Times, the Sacramento Bee, the Fresno Bee, and the San Francisco Chronicle. (Dunn’s site lists no newspaper endorsements). Bowen is endorsed by dozens of other organizations ranging from law enforcement groups to the California Teachers association.

This editorial is deficient for not even mentioning Christina Tobin, the Libertarian candidate for Secretary of State. She is the founder of Free & Equal, which has sponsored six candidate debates this year, and which is sponsoring the only gubernatorial debate in California this year to include all six candidates (it is being held in Sacramento on October 28, and four of the 6 ballot-listed candidates will appear). She is endorsed by Ralph Nader. She led the opposition to Proposition 14, the June 2010 ballot measure that, starting in 2012, will eliminate minor parties from the general election.