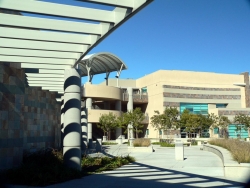 State Chancellor Jack Scott, speaking in East County August 27, called state budgets a “tragedy” for the impact on our community colleges. The District has managed to serve more students with less money than in the past, though cuts to summer school and many other programs have been made. The District also faces swelling admissions due to students who can’t afford four-year universities amid the economy, as well as the growing number of refugees, including Iraqi Chaldeans, in East County.

Two of the candidates, Edwin Hiel and Debbie Justeson, are supported by the American Federation of Teachers. Two others, Leland Ping and Orrin Kole, are backed by the Christian Voters Guide and the San Diego Republican Party. Hiel and Ping are running for seat one, along with a third candidate, Ryan Lee Baker. Justeson and Kole are running for seat 2. (In seat 3, incumbent Gregg Barr is running unopposed.)

ECM sent questionnaires to all candidates. one candidate, Kole, responded in writing. Ping provided a phone interview.  Below is information about the candidates gleaned from a variety of sources including Smart Voter, evoter, articles/ posts in other local media, and direct contact with candidates.

Baker lists no ballot designation and no information on his could be found online.

Hiel is a community college professor and counselor with a master’s degree from San Diego State University in counseling as well as degrees in agricultural management and animal science from Cal Poly. H e is endorsed by the American Federation of Teachers local 1931, a well as the San Diego/Imperial Counties Labor Council and the San Diego Democratic Party.

Justeson is a college/university instructor. She is endorsed by the American Federation of Teachers local 1931, as well as the San Diego/Imperial Counties Labor Council and the San Diego Democratic Party.

Kole has spent 10 years in law enforcement and is a U.S. Army veteran. He is a member of the Republican Central Committee. says he is running to bring balance on the board, citing a “union power play.” He says he would address the budget shortfall by having “everyone do their part. Students should not suffer the most.” He would not support a bond measure to raise funds. He opposes the Dream Act. Kole is endorsed by the San Diego Republican Party and the Christian Voters Guide.

Ping is a preacher, insurance agent and former high school teacher. He is for fiscal restraint and transparency. He is also against the Dream Act. He would support taking away the ability of college-age children of undocumented immigrants to attend college. He is endorsed by the San Diego Republican Party, Republican officials including GCCCD board member Rick Alexander, as well as the Christian Voters Guide.

Thank you for changing the headline. As you know, headlines are the first thing people read. I realize that you are limited in your resources. I just want the readers to know that the Grossmont-Cuyamaca AFT (teachers union) has spent $350,000 in this election. The mailers sent to voters have been incredibly distasteful and misleading and as human-beings, they should be ashamed of themselves. Why would they slam a combat veteran, or anyone for that matter, in this manner? As a member of law enforcement, I'm sure he is a union member, but they have no regard for this either. I've been to many of the candidate forums and the two teacher union-backed candidates have yet to be at any of them. They are awfully quiet. I can't find evoter or League of Women Voters info on these two candidates either. I am thinking that if they are elected, they are going to be the Grossmont-Cuyamaca AFT's puppets. These are not the type of people we need on our school boards in East County.

in free programs such as Smart Voter and e-Voter.  Even if you have a scheduling issue and can't get to a forum, all candidates should provide basic info on these online services in my opinion. I am amazed at how many local candidates did not list their information at these sites (and I might add this includes candidates in both parties, conservatives and liberals, union candidates and anti-union candidates in some races).

Perhaps some are not aware that these sites, as well as participation in media interviews and questionnaires, can often make the difference between victory and defeat in close races.

You call the conservative candidates "challengers," however, these two seats are OPEN. The teacher-backed candidates are not incumbents! Why is it you have to call the non-teacher endorsed candidates the challengers? Sounds like bias to me.

As for spending $350,000 on this election and slamming the "conservative" candidates, you have to wonder what the Grossmont-Cuyamaca AFT is up to.

However we have amended the headline to also reflect that fact.

We did not have time to obtain financial records on this race so close to the election.  As a nonprofit media outlet our resources and time are liimited. We started with higher tier races, then covered as many local races as we could.   We also waited very late on this one because so many candidates did not respond, making repeated calls and emails to try and give all of them an opportunity to do so.

I read carefully the blog about candidates and detected what appeared to be a slant, a spin, a bias??? Teacher-backed, liberals were presented in a very positive light whilst conservative, Republican-backed candidates were presented as not supporting this or that. Why, when I read anything regarding educational political races, must I constantly have the pro Progressive Liberal agenda thrown in my face with bunches of flowers and shining light and "To help the children" whilst at the same time any and all conservative candidates are caste as those who will not, would not, refuse to??? You profess to want to "Help the children" whilst you rather make it clear that you "Want to help yourselves!!!!!!!!!!!"

the conservative candidates got more coverage of their views because they answered the questions while other candidates did not.  I am astounded that you would see using the candidates' own words as bias.  Candidates are always encouraged to advise us of any other issues they wish readers to know about.