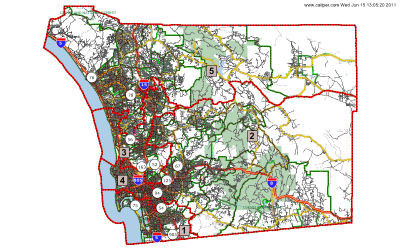 June 15, 2011 (San Diego County) -- After a series of public meetings that began in February, the County’s Redistricting Advisory Committee voted Monday to forward three proposed redistricting plans to the Board of Supervisors. The citizen’s committee was tasked with gathering public input and forwarding no more than three plans for the Board’s consideration. The Redistricting Advisory Committee finished that work and held its final meeting Monday.

The Board of Supervisors is expected to hear the committee’s proposed plans at its regular Board meeting at 9 a.m. on June 28.The Redistricting Advisory Committee’s three proposals can be viewed at the County’s redistricting website at www.sdcounty.ca.gov/redistricting. Once at the site, please choose “view/submit plan” from the left menu; then choose “view the latest proposed plans.” This will take you to the online viewer, where you can “Choose (a) Plan.”

The Board is expected to introduce its redistricting ordinance at its July 12 public meeting and adopt a final ordinance at its August 2 meeting. The ordinance would take effect in early September, setting district lines for elections in 2012 through 2021.