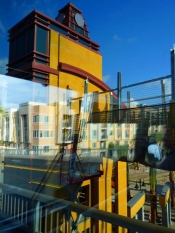 November 23, 2011 (La Mesa) – Mayor Art Madrid cut the ribbon this week at the grand opening of twin glass elevators rising from the Grossmont Trolley Station to the street above. Before, commuters and apartment dwellers along the transit line had to climb a steep flight of 77 stairs to access Grossmont Shopping Center or Grossmont Hospital above, an impossible feat for those in wheelchairs.

Calling the occasion a “"red letter day in La Mesa,” Madrid thanked the San Diego Association of Governments, Metropolitan Transit System and a coalition of local officials who worked with staff and elected officials in La Mesa to make the project a reality.

Jackson Alexander, a San Diego County administrator confined to a wheelchair, thanked officials for improving access for the disabled. "This is ideal,'' he said.

Wheelchair occupants were the first to ascend the new elevator from the station, now a model for transit-centered development for our region.

Approximately half the project's costs were covered by the American Recovery and Reinvestment Act approved by Congress. SANDAG oversaw construction by Riha Construction, a La Mesa company.