January 6, 2012 (San Diego)--100 years after a Free Speech movement was born in San Diego to protect citizens’ right to protest, the movement has come full circle…..

Few San Diegans today are aware of numerous free speech fights across America a century ago—or that “dwarfing them all was the San Diego episode,” according to the San Diego Journal of History’s fascinating account at http://www.sandiegohistory.org/journal/73winter/speech.htm. Fearing mob violence from the Industrial Workers of the World amid a growing U.S. labor movement and actions by anarchists, City leaders in 1912 outlawed public speaking in a five-square block area of then-downtown centered at Fifth and E streets. Thousands of defiant people turned out in protest of the ban and numerous arrests ensued, clogging jails and courts. Fire hoses, horsewhips and clubs were used by police; vigilantes joined police, even kidnapping a newspaper publisher as riots and deaths ensued in a conflict that lasted six months.

To this day, however, San Diego has never restored the people’s free speech rights.

Today, Occupy San Diego members came to City Hall to present a ballot proposal that would amend the encroachment code.
According to Martha Sullivan of Women Occupy, “the timing of this is significant, since this coincides with the hundred years of the Free Speech Movement in San Diego.” According to Occupy San Diego members the Encroachment code is written too broadly and it is used to arrest OSD members, as well as harass them.  The last three months at Occupy San Diego have seen about two hundred arrests.
Most of those arrested have been arrested under the San Diego Municipal Code 54.0110. This Code was passed in 2007 to replace SDMC 62.0306. 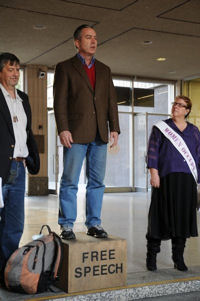 Both were meant to deal with things like waste containers in public spaces. The Municipal Code San Diego Occupy wants to modify is written too broadly, according to member of the occupation, it reads in part: “It is unlawful for any person to erect, place, allow to remain, construct, establish, plan or maintain any vegetation or object on any public street, alley, sidewalk, highway, or other property or public right-of-way, except as otherwise provided by this code.”
This city code has been interpreted to mean that Occupiers can be arrested for placing a backpack on the ground at Civic Plaza, or for that matter a cup of coffee. That is encroachment. This is why OSD is presenting the city with a ballot proposal to refine the present code, with the following exception to it’s more mundane statues dealing with trash collection: “The provision of this section shall not apply where their application would result in an interference with or inhibition of peaceful picketing.”
Martha Sullivan reminded us that like in 1912 many are being arrested by San Diego PD, with very few actually charg
Ray Lutz of El Cajon also explained how this code was used to arrest him when engaging in voter registration. As he pointed out, both major political parties have set tables during registration drives with nobody bothering them. Yet, he was arrested and taken to jail for eleven hours on November 29, and it was this municipal code that was used to effect the arrest.
Occupiers did file in Federal Court but lost. And while the Temporary Injunction was rejected in Federal Court, the court also said that the city was interpreting this municipal code too broadly. They are keeping track of all incidents to bring back to the Federal Judge. If police behave improperly the Occupy members may re-file, pointing to a pattern of misbehavior by the police.

Representatives from Occupy San Diego proceeded to go to the City Clerk to file the ballot proposal that would repeal free speech restrictions imposed a century ago. They also tried to talk to Mayor Sanders, with Martha Sullivan filling out a written request. Occupy San Diego has tried three previous times to see the Mayor, with no luck.
Today, on the Free Speech movement’s anniversary, they were met by the Mayor’s security detail.