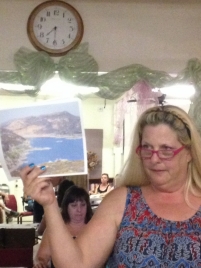 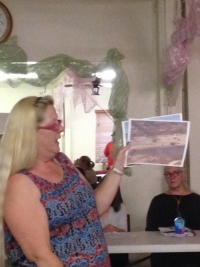 Campo resident Karen McIntyre led a discussion on exploring how residents can keep both Lake Morena and Barrett Lake at higher levels.  The City of San Diego, over an hour distant from this rural fire-prone region, obtained rights to the reservoirs’ waters years ago through an ill-conceived agreement with the County.  Lake Morena has been drained to just 2.7% of capacity and Lake Barrett around 6 percent.

Lake Morena has gone from being the third largest lake in San Diego County to the smallest among 24 lakes countywide. (Photos: Below left, Lake Morena in 2011 before the draining and in 2014 after draining commenced. The level in this deepest part of the lake is even lower today.) 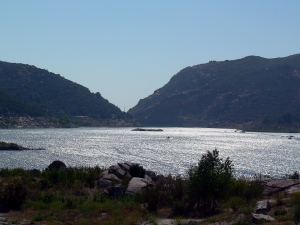 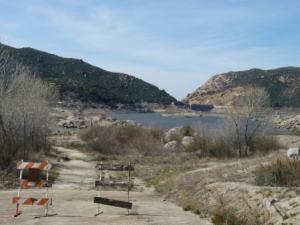 McIntyre stated that new laws recently enacted in California mean that “locals can start getting control of our waters.” She added that to her, “local” does not mean San Diego, a city that residents near Lake Morena do not live in, nor have any voice in.

“Everyone is aware of the Father’s Day fiasco,” she said of the day the Border Fire started. The fire killed two people, also destroying five homes and 11 outbuildings.  She said firefighters who spoke with her off record said they were ”maxed out” and that there was not enough water left in Lake Morena for firefighting helicopters to scoop up water. That meant delays while aircraft traveled to Loveland Reservoir near Alpine.

“Precious moments were lost and that caused the fire to get out of control,” she charged.

Looking ahead, with the prospect of more fires during the summer and fall months, she noted,”That Lake is not going to help us. We need to fight the city. Not just Potrero (where lives and homes were lost), but PineValley, Campo, Lake Morena, Boulevard and other communities that could be next to burn.  “This scares the living daylights out of me,” McIntyre stated.

She held up photos to show beautiful lakefront views before the draining began in 2013, then an after shot.”This is what we have now—a cracked mud puddle out there.”  She also voiced outrage that “while we’re in the middle of a firestorm, the City of San Diego decides they’re going to loosen their restriction on water use. That means OUR water.”

The City of San Diego never asked its residents to conserve water before draining Lake Morena.  The water was diverted to Otay, where after heavy rains, large amounts of water were released and dumped into the ocean.  Other reservoirs in the city limits are kept full and attractive, while only rural areas outside the city limits are having their reservoirs drained, McIntyre noted. 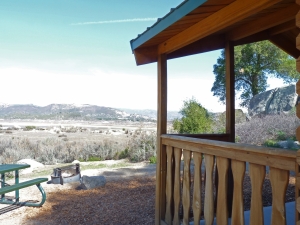 Meanwhile rural residents near the Lake have been struggling with conservation mandates and skyrocketing water bills, while at the same time their property values have plummeted due largely to destruction of Lake Morena, a scenic resource and tourist draw for Morena Village.(Photo, right:  Former lake view cabin in Lake Morena County Park now looks out over an arid wasteland instead of a riparian habitat.)

For the City of San Diego, it boils down to putting economics over rural lives.  The city pays $800 per acre foot to buy Colorado River water, but just $240 per acre foot for water acquired by draining Lake Morena, according to McIntyre.

While Otay Lakes property values are being propped up thanks to water from Morena, McIntyre told rural residents, “Your properties are all devalued. There is no more lake view. People are moving away.”

It’s not only rural residents who are concerned. McIntyre cited a 2015 Los Angeles Times article  in which a Cal Fire official indicated concern over loss of water in lakes and ponds.

“Lives have been lost that may possibly have been saved, if they have been able to get water out of Lake Morena and not burned 6,000 acres in less than 12 hours,”  McIntyre charged.

She also voiced concern over concentrated nitrates and minerals seeping into groundwater because of the lake being drained so low.  Wells are also running dry “My well is pumping up sand,”said McIntyre.

Wildlife is also being impacted at the lake site, a stopover for migratory birds along the Pacific flyway, one resident observed. “Just ask the environmentalists.”

Supervisor Dianne Jacob has tried for years to get the city to stop draining Lake Morena or at least leave the water at a reasonable level for firefighting purposes. But the city has demanded around $2 million a year to do so – on a yearly basis, money the County says it can’t afford. The County owns land around the lake including a park with campgrounds and cabins, so the County is losing revenues as are local merchants with tourism from fishermen, campers, hikers and boaters dried up.

“Outrageous,” McIntyre summed up. “The city of San Diego needs to be held accountable. We need to stand up as a community and stand behind Dianne Jacob and say `We’re not going to take it anymore.’ If we are 10,000 voices strong, making a big fuss, they’re going to have to bend.” 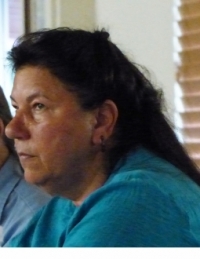 Billie Jo Jannen, chair of the planning group, (photo, right) asked, “Is there a legal avenue?”

McIntyre replied, “Yes there might be,” due to the new laws aimed at assuring local control of groundwater supplies.  She hopes an attorney willing to file suit against the city on a contingent fee basis can be found.

A man in the audience asked if the County can take action against the City.

McIntyre said that the county is bound by its contract with the city, but added, “we as a community are not bound by that contract—and we can take them on.”   Turning to the audience, she asked, “What price are you going to put on your life?”

She said she lives  in a home with only one route in and out.”If I’m not paying attention, I may not make it out,” she said. “I don’t want to see my house going down in flames.”

Someone else in the crowd said the community shouldn’t put its eggs all in one basket and should write letters to other officials such as state and federal representatives, as well as to Dianne Jacob.

Jannen observed, “There is a public safety argument to be made with or without an attorney.”

East County Magazine has submitted a public records act request to Cal Fire for all communications records during the Border Fire related to Lake Morena water levels and we will publish those once received.

We have also asked San Diego Mayor Kevin Faulconer and the City Council to respond to the serious public safety concerns linked to low water levels in Lake Morena during the Border Fire.

Note: Other Border Fire issues raised during this meeting will be covered in a second story to be published soon.

He fought with Potrero residents against Blackwater's effort to set up a paramilitary training camp opposed by residents.

He stopped the draining of Lake Morena.

He tried to stop the Ocotillo Wind project at residents' request, event informing the Secretary of the Treasury about apparent fraud by a wind developer to pockets subsidies at the public's expense.

Politics matter - and rural residents should make this a campaign issue for any council candidates in November and could also work to get environmental groups and other organizations in San Diego to push the Mayor and Council to change this destructive policy.

A report from the 2013-2014 San Diego County Grand Jury is here. quote: As an example of water politics, the City plans to draw down two billion gallons of water from City-owned Lake Morena over an approximate five month period. This will be at a substantial detriment to the community and tourism at Lake Morena, as well as decreasing firefighting water sources needed as the weather gets warmer and drier. The City now plans to take that decision one step further. The City’s stated position is: “Now it [Lake Morena] is only 4 percent full and 4 percent full it will stay. We intend to essentially run the lake at about this current level as long as we possibly can so we can capture and use the local runoff to the benefit of our rate payers,” The City owns the lake and is well within its rights to do so; however, is this in the best interests of the citizens of San Diego County? San Diego’s former mayor, Bob Filner, had stopped the drawdown. The interim mayor, Todd Gloria, and new mayor, Kevin Faulconer, have restored it. A change in political power made a difference in this water decision. The City actually had a chance to increase local storage due to the recent storms in late February 2014, but political inaction prevented it.

The City buys water from the California Water Authority that is treated chlorinated potable drinking water. It can go to the Otay treatment plant or to the lake. The water in Morena is considered "free" water. Because Morena is shallow and warmer there is more loss to evaporation so it is sent to Lower Otay.
The CWA also dumps excess water to the lake, at times a lot of water. Look up acre foot of water and cubic feet per second, the standard way to measure volume and flow. Q=AV.
I'll try to answer any questions in the comments.