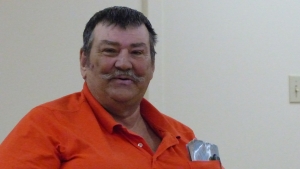 July 6, 2016 (Potrero) –“How do we move forward now?”  Robert Buerer(photo,left), leader of the Potrero  Community Emergency Response (CERT) Team asked at  a Potrero Foundation disaster preparedness meeting on Saturday, July 3 in the aftermath of the Border Fire.

He wants to expand a Neighbor to Neighbor program that’s arisen out of Neighborhood Watch.   Each neighborhood would have a team leader and phone tree to spread word about alerts and evacuation notices to  neighbors.  To prevent a recurrence of the tragic loss of a couple trapped during the Border Fire with a broken-down vehicle, the program would enable neighbors to learn if someone needs help to evacuate or find a haven for those who choose to shelter in place.

Officially,the County urges everyone to leave when asked to evacuate.  Sheltering  in place is controversial and potentially dangerous. 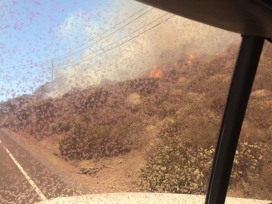 But evacuating can be dangerous too, since there are only two routes out of Potrero –State Route 94 east or west . Some who fled in the Border Fire had to drive through a “tunnel of fire,” as one motorist described it.(Photo, right) One route is steep and winding down to Dulzura, the area  that swiftly burned in the 2007 Harris Fire.  The other is 13 miles to Campo.  If the fire burns faster than the vehicles seeking to evacuate, there are no side roads on which to escape.

In the 2007 firestorm,  firefighters were scarce in this remote town, and some homes were saved by residents who stayed behind and used garden hoses to down flaming embers that landed on neighbors’ homes.  In the 2016 Border Fire, people who did evacuate had livestock and pets starving  and dehydrdated in triple digit heat, with inadequate help from the County which saved some animals, though many others perished.  People who left to get feed or water for animals were not allowed to return, leaving residents frustrated and angry.

There were also problems with evacuation notices.  Jan Hedlun said a Sheriff deputy did cometo her gate.  But she said,”He never used the evacuation. He just said, “Leave.”  I asked where we should go.  He didn’t know. He pointed to Dulzura- where the fire was.” She chose not to leave, sheltering in her home with her animals, but soon was running out of water after her well burned.

Many residents here, including Hedlun and Buerer, want to see one or more “safe zones”established where people who choose to stay during a fire could get out of the smoke, have food and water, a place to sleep, restrooms and communications.  A chicken ranch, with large areas of cleared defensible space, was suggested as one possible location. 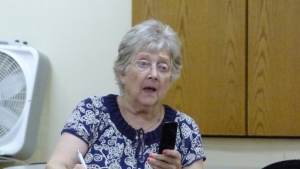 Mary Johnson (photo, right) quipped of a solution to the communication black out, “I would say smoke signals ,but I don’t think that’s a good idea here,” drawing wry chuckles.

Burerer  wants to see CERT or a Fire Safe Council have a mobile trailer equipped with HAM radio and other communications equipment.  Mary Johnson proposed installing emergency sirens that would sound alerts throughout the town.

Hedlun noted, “Not having a central location crippled us…There was nowhere to get information.”  A community center was locked and Sheriff’s deputies blocked access to their information center.  Hedlun suggested the CERT team put up signs to direct residents. There was discussion about an old fire station no longer in use that may be rebuilt or sold.  Some bemoaned the dropping of volunteer local firefighters as the County partnered with Cal Fire to rely on trained professionals, often from out of the area. 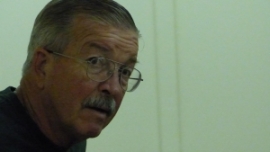 eople here want alternative evacuation routes. Eric Berger (photo, left) said he carries bolt cutters and used them to cut a fence and escape through private property.  He said everyone should carry bolt cutters and also stock up a 7-day supplies of emergency provisions since the 3-days the County proposes proved insufficient here; nobody was bringing in supplies for those sheltering in place until the evacuation order was lifted and community volunteers finally were able to do so. He asked what a good used fire truck would cost.

Some used Harris Ranch Road to escape,but that’s a rough dirt route that could easily become a trap. “If one guy screws up in a panic, everybody else is dead, “Buerer  noted.  He  wants to see that road widened and made safer. He said the state has easements but “won’t spend the money.”

There were many issues with animals.  Berger thought the school would have been a better place for the public than the library initially.  He said his  old dog was overheating and that a place with air conditioning was needed. He praised one deputy who brought in extra firefighters’ food to share with stranded residents.

Buerer suggested people get generators and set them up before the power goes out, “as soon as you smell smoke” to avoid the problem faced by a chicken rancher who wasn’t allowed to hook up a generator after the power went on until so late that thousands of chickens died.

Berger said there will be an official After Action report to include areas that need improvement before the next fire.

Hedlun praised Leann Mitsui and Iris Gardener for their efforts to get feed and water to livestock and pets left behind, since some residents had too many animals to take with them and others were out of town when the fire started.  Hedlun thanks Mitsui and Gardener for “all they did to help the people here and save so many animals.”

Johnson proposed a community potluck to let neighbors get to know each other and help form bonds to build the Neighbor to Neighbor  program. Hedlun said Potrero needs to reach out to neighbors in Campo and Lake Morena, too to stay connected.

Those who lost homes and outbuildings need help, it was noted. Some were renters, with no insurance and not even an opportunity to rebuild.

The County has limited its fee waiver for only the rebuilding of structures previously permitted.  “We’re an old community,” one resident observed.  Residents who live in older, historical buildings  built before permits were required are “screwed”, she added. “They won’t get grandfathered in,” meaning some damaged structures may have to be torn down, not rebuilt. 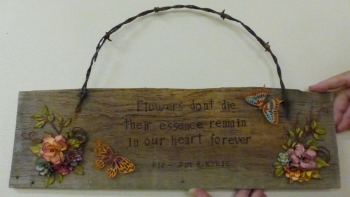 A  memorial service will be held July 10th at 11 a.m.for Jim and Kyrie Keefe, whose bodies were found by volunteer searchers huddled in rocks behind their home.  The memorial will be at the site where they lived and died on Highway 94 in east Potrero.

A makeshift memorial, with flowers and cards, now adorns a gate at the blackened site. At this meeting, one resident brought a hand-made wooden sign with a barbed wire hanger. It reads, Flowers don't die. Their essence remains in our hearts forever."

A disaster group meeting is also planned with the Campo-Mountain Health Group on July 12 at 1 p.m.  at the Campo Community Center.  In addition, those concerned about future fires are encouraged to attend the Real East County Fire Safe Council on July 16th at 5:30 p.m. at the Campo Fire Station.

Some residents are also working to organize a firefighter appreciation barbecue; date is to be announced.

After the meeting,  CERT members headed off to a nearby lot, where 284 hay bales donated by anonymous farmer in the Imperial Valley were being given away to those in need.  As of mid-morning, enough hay to feed about 100 anim 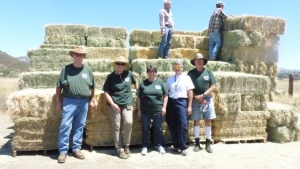 als had been given away to grateful farmers and ranchers.

Cecelia Martes told ECM, “We’ve had a lot coming through today.  A lot of them lost their hay; the fields burned.”  Each person was allowed to take up to six bales, but encouraged to come back at 2 p.m. for more if any were left.

Teresa Greenhall with CERT said many lost power and had to throw away food in their refrigerators. For poor residents, some couldn’t afford feed for their animals along with replacing food for their families.

The  San Diego Rural CERT team covers a vast area across the southeast part of the county including Potrero, Pine Valley, Mountain Empire, Guatay, Campo, LakeMorena, Boulevard, Jacumba, Jamul and Harbison Canyon.  officially activated for the fire, was deactivated after the hay giveaway was over, their jobs done…until the next disaster strikes.

Motorola offers a variety of radios.