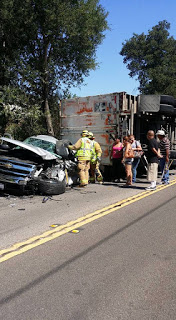 The accident was first reported at 10:23 a.m.  on Highway 94 at Marron Valley Road. Hamilton indicates that the CalTrans site showed a SigAlert icon but had no mention under the “problem areas” section.  The California Highway Patrol Incident page  had conflicting and at times inaccurate information.  East County Magazine sent an alert relying on CHP information which indicated one lane had reopened, but we later learned from multiple residents in the area that the highway was in fact closed in both directions.

Media coverage may have been sparse in part due to lack of notification by any official agency, and also due to the fires that shut down State Route 67 in the Ramona area at the same time. 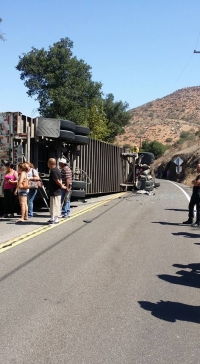 Medics attempting to reach a crash east of Dulzura were denied access, Hamilton told ECM.  A second source told us about an ambulance blocked from reaching Tecate at the border; it is unclear if these were the same or separate incidents.

“There was a request to allow an ambulance through that needed to get to Tecate for a patient,” Donnie Durfee told East County Magazine.  “They were denied access and told to go around as the road was completely blocked…Going around means going all the way out to I-8 and exiting at Buckman Springs. They ended up sending an ambulance in from Campo.”

It is unclear why a medical helicopter was not dispatched to aid the patient or patients in the Tecate-Dulzura area. It it also unclear why one lane was not opened up, with flagmen to direct traffic alternating in both ways, for hours after a photo taken by a motorist and sent by the Antler showed both vehicles on one side of the road.

Durfee says he was listening to his scanner and that motorists had to backtrack from a closure at Marron Valley Road, after driving all the way down 94, only to learn they had to backtrack to the 188 intersection after they were ordered to turn around, at least a 30 minute additional delay.

People also posted complaints about the situation on the Brush Fire PartyLine Facebook page.  One person posted at 8 p.m., “My Dad is diabetic and they are trying to figure out how to get home…since 2 p.m. today.”  The couple reportedly lived between Dulzura and Barrett.

Residents posted helpful hints for each other on the Brush Fire Partyline about potential detour routes, but no such information was forthcoming from official sources. It is unclear why the CHP, Sheriff or other official source did not notify media with a press release, nor the public via a Nixel alert nor even detour signs during much of this lengthy saga.

Running out of gas or water in the extreme heat was a serious concern for motorists trapped hours in traffic, some with no air conditioning. This is an area where cell phone service is spotty, putting people at risk of being unable to even call for help should anyone feel overwhelmed by the heat or another medical condition. There appears to have been no effort by any government agency to check on the well-being of motorists or even offer water to those trapped.

But the greatest fear in the tinder-dry region is what would happen if a wildfire occurred during a prolonged traffic delay.

Hamilton states that State Route 94 is the “only way out and in for thousands in the East County, including those living in the 1500 homes SDG&E labels at highest risk of catastrophic fire” including Deerhorn Valley, Dulzura, Barrett, and Potrero.

With the Hollywood Jamul Casino under construction and an expanded border crossing at Otay expected to increase traffic on the already trouble-prone highway, residents are smoldering with concerns.

Hamilton cites examples of at least a half dozen other incidents that caused delays of several hours or more along Highway 94 in the past two years:

Several residents emailed 10News with their concerns after a head-on crash in Jamul Sunday night. It occurred two miles east of SR-94on ...

California Highway Patrol officials issued a SigAlert for both lanes of State Route 94 in Jamul Thursday after an oversized machinery truck ...

Driver killed in multi-car crash on SR-94 ... a weekend traffic accident on State Route 94 in the Jamul area that may have been alcohol-related.


1.Semi with large haul stalled on SR-94 near Dulzura

SR-94 is already dangerous,” she wrote, citing statistics from a U-T San ... Interestingly, however, while accident rates rose in rural areas with ...


1 Killed in Crash near Border Checkpoint

Some roadway improvements are planned or underway along Highway 94 in part due to casino mitigation. But residents expressed concerns at a Cal-Trans meeting earlier this month that such changes are inadequate.  While many in the community have fought to oppose the casino, one thing surely both sides can agree on is that hours-long delays when a major crash occurs can only be bad for both business at the casino as well as for residents living in communities that rely on Highway 94 as their major access route.

East County Magazine has asked the California Highway Patrol for an explanation on why the closure on Highway 94 lasted for 10 hours, why there was no notification to the media or public, and what can be done to prevent such dangerous delays in the future.  We will also be reaching out to state and local officials to ask about solutions to not only spare residents long delays in the future, but potentially save lives.

Tecate is a major terminal for semis, which then travel on narrow curvy Rte 94. There are no special route restrictions listed here but there is a 65 foot advisory here.