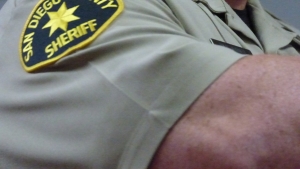 He noted, “There are things we as law enforcement can change and things that we can’t change.” For example, access during evacuations is determined by Cal Fire, not the Sheriff’s department.

Several  complaints focused on the handling of a search for Jim and Kyrie Keefe, the couple found dead among boulders  50 to 70  yards behind their residence by volunteer searchers.

“We have confirmed that they did get word of the evacuation,” Turner told ECM. He indicated that  deputies contacted them on the property. “They were told `We’re fine, we’re going to ride this out, please leave us alone,’” he said. Tragically the fire overran the site and the couple died of smoke inhalation, according to the County Medical Examiner.

Residents complained that after the fire, pleas to deputies to take a missing persons report and launch a search  initially were not heeded, that deputies were not wearing name badges and that at least one refused to give his name.

The Sheriff’s department has indicated that the first person who asked for a search did not know the couple’s name or exact address.

It is true, however, that some deputies’ badges were not visible. That’s because during the fire, deputies were told to wear Yellow turnouts and some wore external vests that covered badges. “You can’t put a metal nametag on fire retardant gear; it will get super hot and burn,” Captain Turner explained.  But he added that deputies should give names if asked and should always be courteous to the public.  The department is looking into potential solutions for the future to have identifications visible.

After a missing persons report was ultimately taken, he said,  the deputies who took the report did walk through the property on Monday, June 27, 8 days after the fire, looking for the Keefes.  The next day, the Sheriff’s Bomb Arson unit and Cal Fire also searched the property but missed finding the bodies in the rocks on a hill behind the home.  They called for a Search and Rescue unit, which includes rescue and recovery dogs, but the canines were deployed on a search for a missing person in Valley Center.

A rural sergeant and search and rescue personnel came to come up with a search plan but in the meantime, Concerned neighbors formed their own search group and found the bodies after a 15-minute effort by following tracks left by the couple’s dogs and also following the odor of decay.

Turner said no effort was made to stop the volunteers. “I said at this point, any help we can get we can appreciate,” he added.

He said an officer called to report that the women who found the bodies were “not happy, they were yelling and upset…I told the deputies to give them some space.”

Some of the women have indicated they wanted to speak to a counselor or social worker, but none was provided.  Turner said he was not aware of that initially but that free counseling short-term is available through Trauma Intervention Prevention Speciaists,  or TIPS.(Learn more at  http://www.tipsandiego.org/)

Other concerns of community members  in evacuated areas involved problems getting supplies for animals including livestock and pets.

Turner said one proposal for the future could be to issue critical infrastructure ID  prior to a disaster that would enable some individuals to have access to care for large numbers of animals, potentially preventing disastrous losses such as a chicken farm where an estimated20,000chickens died due to lack of water, feed, and a generator to power up a cooling system.

He confirmed that people who leave an evacuation are won’t be allowed back in, even if they are seeking to bring supplies in for their own animals.  Asked about an incident in which one  group of volunteers was reportedly prevented from handing supplies over a barricade to a  farmer inside the evacuation zone, however, Turner said, “They should be able to hand supplies over.”

He pointed out that there is good reason for wanting people to evacuate and to stay out until evacuations are lifted.  One is that fires can burn back, trapping people.   The couple who died in Potrero, for example, could have survived if they had heeded evacuation warnings.  Another problem is that unauthorized vehicles can block roads for firefighters or run over and damage hoses, as happened in another recent local firestorm.  If people don’t evacuate and later request a rescue, firefighters are put at risk; one suffered severe burns in the 2007 Harris Fire attempting to rescue a resident in Potrero.

Overall, he believes, “We are light years ahead of when I came on this department in 2002. We are better than in 2003 and 2007.  There are some things in this that we need to look at,” he acknowledged, adding that after a community meeting in Dulzura, some residents have contacted him with specifics on times and dates of interactions with deputies.

Supervisor Dianne Jacob's office has advised that an after the fires action report will be prepared by the County, and that residents will have an opportunity for input after the initial draft report is available later this summer.

Community members raise many valid concerns and there are conflicting versions of what occurred.

The community members with concerns may wish to request a meeting with Sheriff Gore, to allay concerns that a whitewash could occur with a local official involved who some had complaints about.

Place the last name and agency stenciled on the outer layer of clothing.
SD Sheriff... Lt. A. Smith, Cal-Fire...B. Jones.