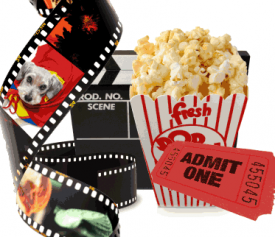 November 3, 2017 (Santee) -- Cinemark Theatres won unanimous approval from the Santee City Council Wednesday to operate a multiplex movie theater. The multiplex theater is to be built on a seven-acre parcel purchased last spring from the County of San Diego near the Santee Town Center shopping mall and Parc One apartment complex at 320 Town Center Parkway.

Studio Movie Grill, a smaller movie chain operator based in Plano, TX, also had sought to negotiate a contract with the City of Santee.

The theater will have up to twelve theaters ranging from 43-to-198 seats. The auditoriums will be designed so they may be adapted for multi-purpose use with high end 4K digital video projectors. A large auditorium with also be available for blockbuster movie presentations with a 70-foot screen and 60 high-end loudspeakers.

Each auditorium will feature lounge recliners seats with footrests and food trays. Patrons will be able to order a full menu of mixed cocktails, beer, and wine along with other items from a large concession area with expanded food selection, candy bins, ice cream, craft beer, and Starbucks coffee. A smartphone app will be developed to allow tickets and food to be purchased online.

Prior to the vote, the City of Santee provided on its website a poll of key questions of what residents would expect from a pre 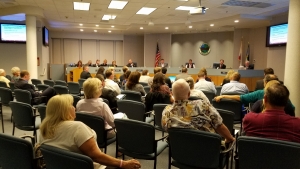 While Cinemark got the nod from the City Council, several Council members advised Cinemark that it must “step up” its offerings especially in light of a wider and better food menu proposed by Studio Movie Grill. It was also discussed that should final negotiations fail with Cinemark, it will then pursue a contract with Studio Movie Grill without further Council action.

Addressing both representatives of Cinemark and Studio Movie Grill, Councilmember Stephen Houlahan said that both cinema operators provided excellent proposals. “It is just split between both of you barely,” he said.

Although Councilmember Brian Jones initially supported Studio Movie Grill for the contract, he praised Cinemark and cast his vote for the Dallas, TX-based company. “It’s a no-lose situation between the two operators,” he said.

Art Ballantyne, longtime El Cajon resident and supporter of East County entertainment venues, was the only speaker besides the movie theater representations to express an opinion during the public comment period. He objected to the food and drink aspect of the multiplex theaters and felt that consumption of food and drink during a movie presentation would be a distraction.

The only other movie theaters with luxury reclining seats and premium food and drink services presently open in San Diego County is the ArcLight Cinema in La Jolla and the Cineapolis Theater in Carlsbad.

By the end of evening, Cinemark ended up with five thumbs-up from the City Council. According to Vice Mayor Ronn Hall, negotiations with Cinemark are expected to be completed in January, with an anticipated opening of the multiplex in 2019.

Getting to the new movie theater when it is built in the quickest, easiest and safest way was also on the mind of the Council in their discussion and vote on a “mobility element study” produced by San Diego-based traffic engineering firm, Chen/Ryan Associates.

The study attempts to update the current City of Santee General Plan 2020 (which was adopted in 2003) to provide a vision and framework for the development of the city’s transportation facilities and how traffic flows throughout the city. This includes personal vehicles, public transportation, ride sharing, bicycles, and pedestrian traffic to efficiently and safely move people and goods throughout the city while maintaining a high quality of life for the residents of Santee and all roadway users.

Part of the presentation also included discussion about extending Mast Blvd into Lakeside, an ongoing political hot potato for members of the City Council and their constituents every time it has come up for consideration.  The proposal to open Mast Boulevard to Lakeside has long been opposed by Preserve Wild Santee, which contends this would open the door to more development and congestion, but was supported by some residents of nearby Lakeside seeking easier access to Santee. 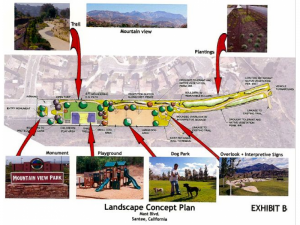 In a four-to-one vote, the City Council made a landmark decision to turn most of the one-and-a-half acres into a hiking trail and a park, a plan which was considered four years ago. That is when the Council began to look at developing amenities including a loop trail connecting to a river trail, parking, benches, landscaping, a playground and a dog park or run at the park, which boasts a scenic view of the Laguna Mountains.

Another major consideration is that developing the area as a roadway into Lakeside would be its cost: a price tag of $8 million dollars of which six million would have to be borne by the City of Santee.