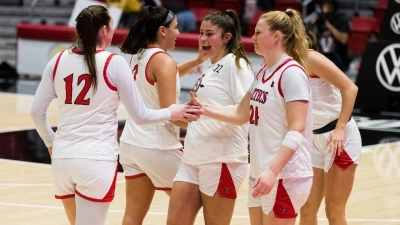 SDSU never trailed and improves to 16-5

SDSU had just eight turnovers and had five players score between 10 and 13 points, led by Asia Avinger’s 13. Yummy Morris had 12 and a team-high eight rebounds and Sophia Ramos, Kim Villalobos and Mercedes Staples all had 10 points.

The Aztecs forced Wyoming to miss their first eight shots and took an 8-1 lead to start the game. After back-to-back threes from Sarah Barcello, SDSU was up nine and held a 19-9 lead at the end of the first quarter.

SDSU pushed their lead to 24-11, but then the Cowgirls got red hot and were able to pull within two points after a 17-6 run.

The Aztecs made seven of their first eight shots in the third quarter to go on a 16-2 run and take a 15-point lead.

Wyoming would make a run after the Aztecs went cold in the fourth quarter, but SDSU held off the Cowgirls by making 16 of 17 free throws in the second half.

Wyoming was led by Quinn Weidemann’s 19 points and Allyson Fertig had 15 and eight boards.

SDSU improved to 13-0 when scoring at least 60 points.

This was the Aztecs’ first win in Laramie since 2015.