"The policy of the GUHSD in thunder/lightning storm conditions would be to immediately seek safe shelter at the first sound of thunder." -- Larry Pear, Grossmont Union High School Di 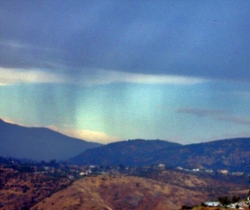 “There was thunder and lightning in the immediate area striking the ground...during the time the kids were practicing,” ECM photographer Dennis Richardson reports. “As I was shooting pictures of the players [from a hill nearby], a man who was watching the lightning storm from the safety of his home near me told me he had just seen a bolt of lightning hit a power pole near Wildcat Canyon and Willow Road.” That’s about half a mile from the football practice, he estimated.

Playing sports during a thunderstorm can be deadly. In 2008, all eleven players on a football team in the Democratic Republic of the Congo were killed when lightning struck the field. 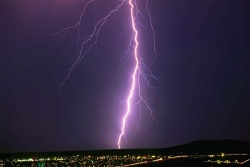 A You-Tube video shot moments after the strike reveals players writhing in pain. (Miraculously, no players on the opposing team were harmed, leading to accusations in the superstition-laden region of witchcraft or spells.)

Our media partner, Channel 10 News, attempted to interview coach David Garcia.  Garcia did not want to go on camera, but told 10News he believed the thunder was far enough away. He said it was on the other side of mountains a good distance from the school and if he thought there was a danger he would have taken his players off the field.

Garcia would not respond when 10News asked him about the district policy of getting students out of harm's way regardless.  The 10News reporter also quoted a player who confirmed that lighting was visible during the rain-soaked practice. 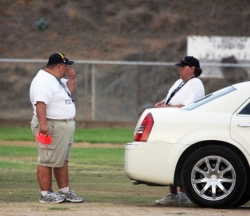 “The school in question has been called and a written message has gone out to all coaches at the school. I have also contacted all our other schools reminding them of the dangers and the necessary precautions they must take in the event of any severe weather conditions," Pear assured ECM in an e-mail.  "The policy of the GUHSD in thunder/lightning storm conditions would be to immediately seek safe shelter at the first sound of thunder and to remain in said shelter until at least ½ hour after the last sound of thunder…I thank you for your call alerting me to what you observed at El Capitan yesterday.”

Broward school district in Florida faced a lawsuit after a junior varsity football player at Monarch High School was struck in the chest and killed by lightning moments after a game was ended due to severe weather. The district had ordered 30 portable weather radios for its high schools to get updates from the National Weather Service, but had not yet installed them when the tragedy occurred.

Richardson indicated the coaches should have had ample warning to get players to safety.  "They were on the field from 3:30 to 5:30 and were released to the parking lot at 5:30 pm to waiting parents ready to pick them up. The coach was still standing near the field, when he told me he thought the kids were safe, just as a clap of thunder roared over our heads," he said.

Even more shocking, the coach had kept the players practicing even though "there was a lightning strike on an electric pole less than one-half mile from the field...while the kids were practicing," Richardson observed.

Lightning strikes ignited fires across East County late yesterday, including blazes near Warner Springs, Julian, Campo, and Alpine.  (Fires in Lakeside were not found to be lightning caused, according to Lakeside Fire Chief Andy Parr.  Parr indicated that his own daughter, a swimmer on Grossmont's swim team, was evacuated from the pool at her school during the storm.)

Lightning kills an average of 73 people each year in the United States and injures hundreds more, many of whom suffer severe and permanent disabilities. Lightning is the second cause of storm-related deaths after flooding.

According to the National Weather Service,  almost all lightning will occur within 10 miles of its parent thunderstorm, but it CAN strike much farther than that. Lightning detection equipment has confirmed bolts striking almost 50 miles away, but these are very rare.

The National Weather Service has created a Lightning Safety Awareness Toolkit titled “When Thunder Roars Go Indoors” and urges counties to implement the program by educating personnel at schools, recreation centers, parks, community colleges, pools, concert facilities, sports clubs, golf courses, and other public facilities. As soon as the sky appears threatening, the NWS advises taking cover, since the first lightning strike from a thunderstorm can be deadly. Don’t wait for rain or lightning striking to postpone outdoor activities.

I would like to see documentation of that supposed lightening strike on Wild Cat Canyon...

Dennis forwarded full documentation to me to verify when I edited but we no longer have it on file due to a recent computer crash.

The photos of kids was from a distance and not identifiable as the chldren's identities was not an issue relevant to the story.  It is perfectly legal however for a news organization to photograph people of all ages in public places, and this is a public school football field.

I am a parent and I attended this practice. There was no danger what so ever. The thunderstorm was many miles away. Perhaps concern should lie with lack of funds for programs at our schools, substandard teachers, out of date equipment and buildings and not a ridiculous complaint like this. I am shocked at the lack of responsibility by this publication for printing this nonesense.

A friend of mine was injured by lightning from a cloud about ten miles away.  Please educate yourself about these dangers.  Also please refrain from name-calling on our forum.  I have deleted an offensive portion of your post which violated this rule.

I see the picture of what looks like kids being attended too, but there was no description of what happened that i noticed, did I miss something ?..
The link, is for the 11 players killed in 2008.
What is happening in that picture ?...