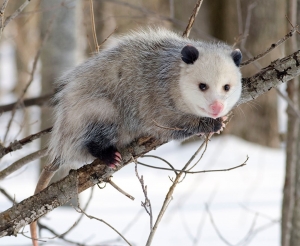 Scientists have isolated the peptide, and in lab tests with mice exposed to venom, those opossum peptides proved effective against Western diamondback rattlers and Russell’s vipers from Pakistan.  The results offer hope that a universal antivemon could be developed to counter the poisonous effects of snakebites from multiple species, National Geographic reports.

That’s big news, since worldwide, about 421,000 poisonous snake bites occur each year, and 20,000 deaths result, according to International Society on Toxicology.  Human testing is next on the horizon.

Moreover, Newswise reporters, scientists found they could reproduce the peptide from E-coli bacteria, meaning it can be replicated cheaply and easily—no opossums need to be harmed in the process.  Unlike standard snakebite anti-venoms, this one has thus far produced no serious side effects such as wheezing, rash or rapid heartbeat.

The anti-venom may even prove effective against other forms of toxins, since opossums also have a natural resistance to poisonous scorpions and some forms of toxic plants as well.

The results were presented in late March at the National Meeting and Exposition of the American Chemical Society in Denver.

The opossum, which resembles a large rat, is a marsupial tracing its origins back 65 million years, around the time dinosaurs went extinct.  But only now have we learned a key secret to its survival against threats that kill many other animals.

So the next time you see a lowly opossum hanging by its tail from a fence or waddling across a road, remember – this ancient animal just may hold the key to saving your life if you’re ever bitten by a snake.

I just bought me some snake-proof gaiters because I frequently walk in the desert bush, and the rattlers are active now. Saw (and heard) one the other day. I especially don't want to get bitten after listening to the experiences of what happened to a guy some years ago. Three days in a coma, three weeks in hospital, and that's with him being bitten in his yard and getting to the hospital in twenty minutes -- not possible out in the bush. He was administered anti-venom several times at a very high cost, covered by insurance thankfully. He informed me that the anti-venom is horse blood. Horses are infected and produce anti-bodies. Who wants horse blood in the veins? So I'm enjoying my snake-proof gaiters when I go for a walk, this time of year. And good luck on possum peptide. (If Tom had known that he might have sold the one he caught for big bucks.)

There was one living in my yard, I thought it was kind of funny. They stink, smell horrible. I bought a trap and took it to a remote area and released the animal.