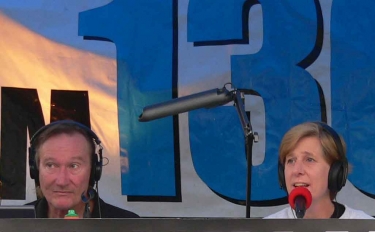 October 2,2016 (San Diego) –A GoFundMe site has been set up to help former San Diego talk radio show host Stacy Taylor, a former Alpine resident.  A radio personality for multiple stations, most recently KLSD on Air America, Taylor posted on his Facebook page today that his house in Rosarito,Mexico was burglarized.

“They got everything of value, computers, jewelry, a camera with 10 years of memories, from Alpine, to Ecuador, to Paris and a hundred places in between. Even all my clothing, running shoes, etc. But these were thieves with a heart as they left me a couple pairs of jeans,”he wrote. “They also stole the one irreplaceable item, an antique, solid gold pocket watch, that unbelievably still functioned. Wonder what the thieves thought when they snapped open the watch cover and saw the engraving "To Isabella Smith, on her birthday, 1887, from her brother". She was my maternal Grandmother.”

Barbara Cummings,  a long-time political activist, started a GoFundMe site. She states,”San Diego has been enriched immensly by having Stacy here fighting the good fight for decades.” She notes that Taylor moved to Mexico after the radio station failed and he lost his job. “He lives a simple life and has made the best of things,” says Cummings.

She says she met Taylor during an anti-war protest outside then-President George W. Bush’s ranch in Crawford, ,Texas,where Cindy Sheehan, mother of a slain U.S. soldier was encamped seeking answers to why the Gulf War  had been started.