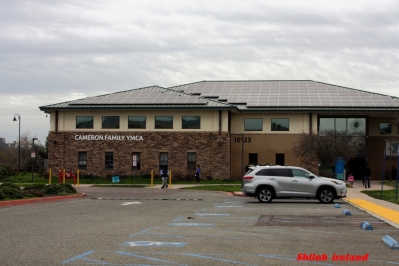 January 18, 2023 (Santee) The Santee YMCA branch announced it will close early today to protect staff members after an announced rally and counter-protest over a teen girl’s complaint of a transgender person she described as a “naked man.”

The San Diego Sheriff’s Department issued a statement indicated it is aware of the planned protest, adding, “We support the public's right to free speech and assembly. We encourage the peaceful gathering of people. We respect your right to be heard.”

The statement added, “The Sheriff's Department does not condone any acts of violence or intolerance in our communities. We are a county that is welcoming of people from all backgrounds. Our job is to enforce the law. As long as people express themselves in a peaceful and lawful manner, we do not have any lawful authority to intervene.”

Rebecca Phillips, 17, testified at last week’s Santee City Council meeting and later, on Fox News indicating she was getting out of the shower when she saw the backside of the man and voiced concern over her safety, as well as the privacy of children who use the facility.(Note, the girl has clarified that she did not see genitalia.)

The YMCA has issued a revised statement acknowledging that the minor involved “felt hurt and frustrated” and apologizing for “not providing her with the level of support she deserves.”

“We understand that the minor involved felt hurt and frustrated,” the YMCA statement indicated, add that the YMCA is “for not providing her with the level of support she deserves” initially. The YMCA has indicated, .“As part of this commitment to ensure all individuals feel comfortable, we are reviewing locker room floor plans across all facilities within our association. Our goal is to ensure that everyone has access to additional privacy if desired and needed.”

A key concern of the YMCA, however, is potential civil liability as well as new state and local laws. In December 2021, Christynne Wood, a transgender woman, won a settlement in a civil rights lawsuit against Crunch Fitness gym in El Cajon. Times of San Diego reported.  The gym “repeatedly denied her access to the women’s locker room,” the ACLU stated in a Union-Tribune story.  Wood was dismissive of discomfort voiced by other gym users, stating at the time, "Whether you are umcomfortable or not is irrelevant.  People were uncomfortable with integration back in the '50s and '60s."

The YMCA’s latest statement touts its “stellar reputation and proven record of protecting and safeguarding children throughout our 150+ years of history. In fact, every YMCA member and employee goes through the National Sex Offender Registry daily, and each location and program operates above and beyond California and national Child Protection laws,” KUSI reports.

YMCA officials thanked “everyone for their patience and understanding as we work through the complicated situation involving the Cameron Family YMCA and the negative, false media circulating.” The YMCA also voiced dismay over what it characterized as misleading reports in some media outlets.

This evening’s planned 6 p.m. rally for women and girl’s rights is organized by a parents and school watchdog Facebook group called SanteeParents4Choice led by Tracie Thill, a candidate who ran unsuccessful for the Santee School Board.

Concerns over potential violence surfaced after white nationalist Mike Forzano, leader of a group that sprung up after the May 2020 La Mesa riots, posted a Facebook video stating, “Our people will be mixed up in the crowd,” Forzano said in a Facebook video. “And if these motherf—s … massively disrupt this event, we will do like we always do — and send them [effing] packing.”

In addition, the political group “Party for Socialism and Liberation – San Diego” has announced its plans to hold a rival “peaceful rally and dance party” at the YMCA in support of LGBTQ rights.

“While the right wing may have a large and loud presence in East County, they do not represent all of its residents. There are many of us in East County who respect and support the rights and dignity of everyone in our LGBTQ community,” the group’s post reads in part.

Today’s parents rally is expected to include politicians, church leaders and members of the Lakeside and Cajon Valley School Districts.

Today, the Santee School District sent a messages to district families stating that it is reviewing its policy of sending students on field trips to the YMCA in light of what’s happened.

The district’s letter says that Santee’s Cameron Family YMCA has been a valued partner of Santee School District for many years providing programs and services to schools.  But the letter adds that in light of a recent “incident involving a community member” at the facility, “District staff have been instructed to work with YMCA leadership to review policies and procedures prior to approval of any further classroom-based trips.  Our responsibility is to make sure our children are safe while under our care and we take this obligation very seriously. Our efforts are focused on ensuring all students feel safe and comfortable while at the YMCA.”

At least one local transgender resident believes there is a middle ground.

Gina Roberts, a transgender activist, told Times of San Diego that the trans community needs to recognize the rights of “nontransgender people.”

“Being considerate of others’ feelings and values is something they demand but are unwilling to offer to others,” she said. “If the person on display had been discreet or considerate of the others in the facility, there could be peaceful coexistence.”

Roberts concluded, “If this trans individual had acted halfway decent, he would have at least been wearing a robe or towel to show respect.”