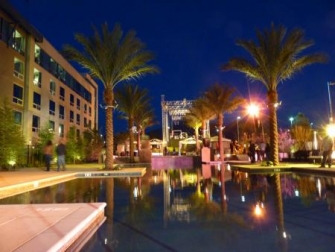 Story and photos by Miriam Raftery, video by Paul Kruze

March 22, 2013 (Alpine) – “This truly is a game changer for East County,” said Joe Terzi, Chief Executive Officer of the San Diego Tourism Authority, at a VIP grand opening last night of the $36 million, five-story hotel at Viejas Casino & Resort in Alpine.  He hailed the new resort as a “great new addition to the San Diego region” that will help East County benefit from tourism that drives San Diego’s economy.

Dignitaries and community leaders from across our region turned out for last night’s occasion.  A second opening for the public, including a free world premier performance of the Cirque-style show “Rise”, will be held on Saturday night, March 23 along with fireworks to celebrate East County’s landmark new  addition.

View our exclusive video, see our photo gallery and read details of this landmark occasion below.

Bob Scheid, Vice President of Community and Public Relations at Viejas, welcomed guests and called the event a “very significant milestone not only for the tribe and the casino, but also for the community.” 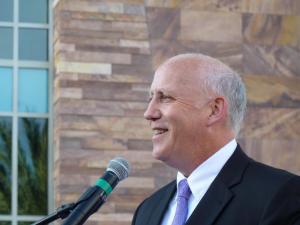 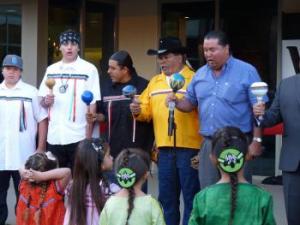 A traditional Kumeyaay blessing and burning of sage heralded t

he auspicious opening, along with performances by Native American bird singers, both adults and children. Bird songs tell the stories of the Kumeyaay Indians, who trace their history in our region back over 10,000 years.

Viejas Chairman Anthony R. Pico  introduced the tribal council members, thanked the construction team team, loyal casino guests and the community for their support through the years. He also iacknowledged leaders and tribal council members from other tribes, as well as business and civic leaders from the U.S. and Mexico. 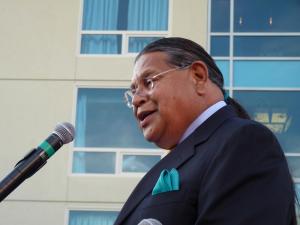 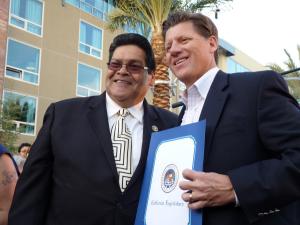 The California Air Resources Board also presented an award to Viejas for creating a hotel that is 100% smoke free in all areas, including 99 rooms and 29 suites, plus public areas including lobby, gym, business center, and buffet.

Pico noted that the resort hotel has been “a long time coming,” recalling that the Viejas Casino opened in 1991 and became one of the most successful casinos in California. “That kind of success is a major milestone on our journey together,” he said, adding, “I look forward to sharing continued success with all the members of our community—tribal and non-tribal.” 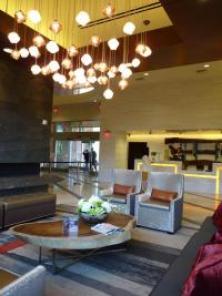 Tribal gaming has helped to lift the Viejas people “out of a dark spiral of abject poverty” and into a “new era of self reliance and self governance, not just for my generation, but for generations yet to come,” Chairman Pico continued.  He noted that the tribe has contributed donations to benefit education, recreation, cultural preservation and more, including contributions off the reservation to support nonprofits, schools, and healthy communities. 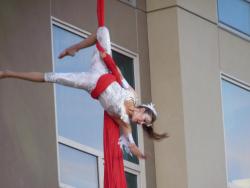 Viejas currently employs 1,600 people, with a $50 million payroll, and buys $40 million in local goods and services.

“Now how’s that for a shot in the arm for our local economy?” Chairman Pico asked.

The new hotel has provided 400 to 450 construction jobs and will provide about 60 ongoing local hotel jobs.

Chris Kelley, Viejas Casino General Manager, led plans for the new Viejas hotel.  “The road we are on today is bright with opportunity,” he said, adding, Our challenge is to be the best in our market.”  He also offered up a message for the management of the resort’s competitors at Barona and 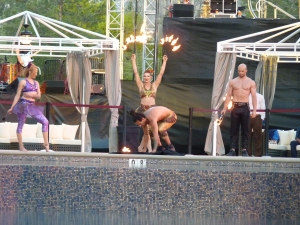 Sycuan.  “No one takes to school like Viejas—and class is in session!”

Kelley introduced a sneak preview of a cirque-style performance titled “Rise” commissioned especially for Viejas.  “This is  story of redemption and overcoming great obstacles,” he said. “It is our story.”

Costumed performers rise alongside the hotel walls beside the pool as performers onstage twirl flaming batons and perform acrobatic and contortionist feats as they depict the phoenix-like theme.  The preview ends with fireworks shooting upwards as twilight transforms the poolside venue complete with cabanas into a glittering tableau illuminated by dramatic lighting and fire pits to warm poolside guests. 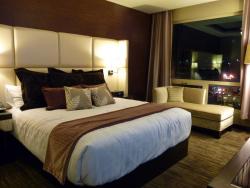 The evening ends with a tour of the rooms and suites, each elegantly and tastefully appointed.  Amenities include wide screen TVs, free wireless and direct connect Internet, spacious showers, multiple phones, his-and-her robes, choice of down or hypo-allergenic pillows, and more. Some of the more luxurious suites include wet bars, fireplaces and tubs with whirlpool jets, and other special touches.

The hotel opens into the casino, where guests can savor an expanded buffet or dinner at the award-winning Grove Steakhouse and other restaurants.  The resort is located across the street from the Viejas Outlet shopping  center, featuring numerous factory outlet stores, a bowling alley and arcade, more eateries, and in winter, the largest outdoor ice rink in Southern California.   Viejas Casino & Resort is located in the historic mountain community of Alpine, off Interstate 8 about 30 miles east of San Diego. 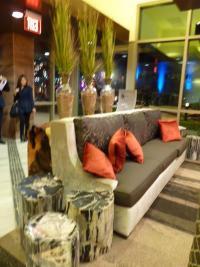 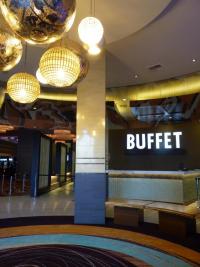 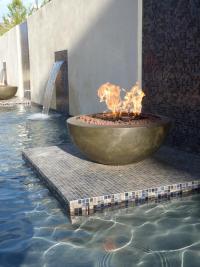 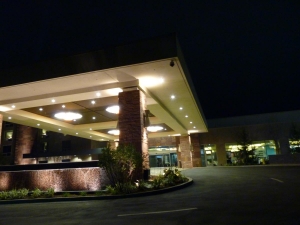 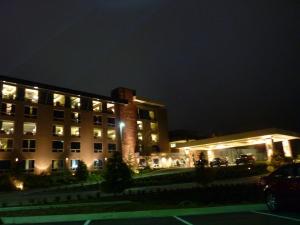 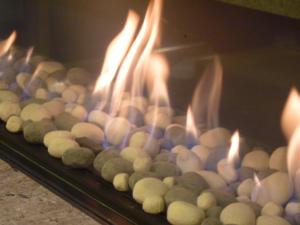 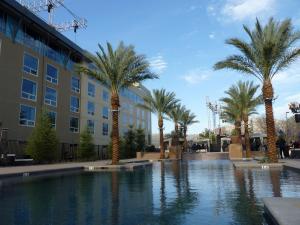 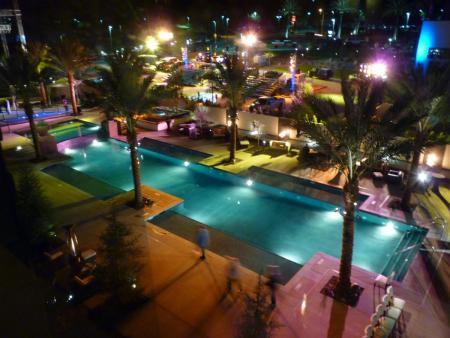